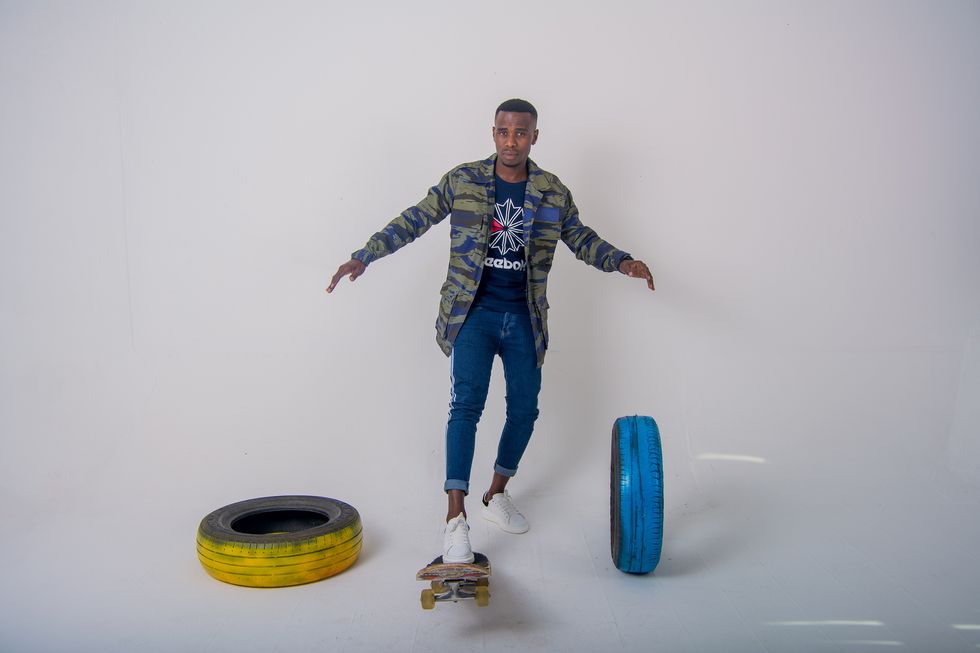 We talk to Bigger Nzuza about his work with FAKA, the self-proclaimed "aunties" of South Africa's queer music & art scene.

We can barely hear each other.

Bigger Nzuza has just come off stage from DJing a high-octane set at Seize The City for FAKA. We're standing at the relatively calmer bar area exchanging numbers. Our eventual chat takes place over FaceTime call and the Saturday afternoon din from the street outside my Braamfontein apartment makes it feel a lot like when we first met. It doesn't take me long to realise that wherever DJ Bigger Nzuza goes, sound follows.

"My mother had a house in Siyanda [a small township within the greater Kwamashu area in KwaZulu-Natal]. I would visit frequently," he remembers. "Whenever I would pass by DJ Deep's place, gqom would be playing, the house would be full and they would be DJing because they had a sound system."

DJ Deep, who passed away in 2010, proved to Bigger that music, and specifically DJing, could be a viable career option. For both Bigger and Deep, their childhood days were marked with intense religiosity. They were both churchgoers: Deep's father was a pastor and Bigger belonged to a family church. Bigger was also lead singer of a gospel choir and the leader of an isicathamiya group at school. "I'd say music was always my thing. I'm not sure if it's because I was naughty at school but there wasn't anything that had to do with music which I didn't want to participate in."

Gospel wasn't a strange genre to foray into. As far as gqom is concerned, that can be attributed to the environment he found himself in. But some may ask, how does a cis-heterosexual man from Kwamashu, KwaZulu-Natal end up DJing for FAKA, the self-proclaimed and peer sustained "aunties" of South Africa's queer music and art scene?

"What can I say?" he asks laughing. "I used to come across those kinds of questions. 'You're working with these guys? How could you work with these guys?'" The beginning of the story is just as peculiar as the situation itself: up until their first gig together in Germany, DJ Bigger and FAKA had never personally met. They were connected by Jamal Nxedlana of Bubblegum Club but had remained pen pals until meeting face-to-face for the very first time in Germany.

"We laughed. I don't want to lie. We were gagging for more than 30 minutes," Bigger tells me about meeting FAKA's Desire Marea and Fela Gucci. After checking out their performance venue, they sat down for a round of proper intros. "I understood who they were because I went through their profiles on Instagram and Twitter. They told me that this is the lifestyle they lead. It was nice and we understood each other."

The feeling is mutual for FAKA. "Bigger approached us to be our tour DJ last year after he had facilitated the production of "Uyang'khumbula" and for us it was important to include him in our narrative because he is one of the originators of gqom," Desire tells me. "Besides his authenticity, we just had a good feeling about working with him and our relationship has evolved over the past year."

Getting along in Germany is one thing but home will always be KZN. Growing up a churchgoing boy in Kwamashu, the contrast with arguably South Africa's most flamboyant queer artist duo is the stuff film scripts are made of. So, how does he deal with this tension? "I always have an answer ready. I always say, 'Do you listen to Metro FM?' I know the person will say yes. Then I'll ask, 'Which show do you like the most?' They'll answer whatever. I'll say, 'The show I listen to a lot is DJ Fresh's breakfast show. I love it. You know who Fresh works with, right? Who's in the crew? Fresh works with Somizi. Somizi is himself. Fresh is himself. But they were brought together by work.'" He continues his argument by offering Black Coffee's collaboration with Nakhane on "We Dance Again" as another example.

I wasn't sure what to expect from my interview with Bigger. Watching him with FAKA at the Seize The City party in downtown Johannesburg was my first encounter with this easy-going, beanie-clad straight guy DJing for my outright queer friends. Of course, that should warrant that he's open-minded by default but do you really know until you know? "What if I don't judge them for who they are? Instead, I focus on the thing we all love to do. I understand their lifestyle and they're not faking it or pretending. That's who they are," he says very matter of fact. "I personally believe that you're born that way, not that you just decide to change because you want to create that kind of image. In South Africa, we're not educated about [queer identity] because people think there's something wrong with you if you're gay but that mentality is not right."

Just like Fresh and Somizi, and Black Coffee and Nakhane, music is the thing that brings Bigger and FAKA together. In particular, it's gqom music, a genre born and bred in Bigger's backyard. Desire Marea is from KZN themselves so the idea that gqom would be the genre of choice for FAKA is sound. This idea of home and sharing it loudly is a central theme in everything that they do. "When you look at FAKA's music videos, here in South Africa, they're not taken seriously," Bigger feels. "They even laugh at them like, what are these kinds of videos. Meanwhile, overseas they love them because they showcase our culture. 'Oh, so Africa is like this?' They love them for that!"

FAKA's performance at Afropunk utilised visuals that featured, among other things, Rebecca Malope, Zionist Christian Church members in uniform, Tsonga women dancing in the xibelani, and even scenes from Days of Our Lives. "When someone watches you perform and sees those visuals, they feel the way the people on stage live. It's our way of showing them what [our] South Africa is like." Of course, this is more Bigger and FAKA's South Africa than it is most people's South Africa, which is both fine and fair. They can only be responsible for sharing their personal experience.

Outside of his work with FAKA, Bigger Nzuza is part of a group called MIASCO FAM. The group is made up of three young acts by the names of Kay Bee, Ayo and Tropika, all of whom knew and worked with DJ Deep. The group has been producing singles with the aim of shaping the future of gqom. He also hopes to release a solo album this year.

He mentions DJ Lag as someone who's gotten it right. "That dude is originally from ekasi and he's doing major things, but he's not recognised in South Africa. If you consider the work he's done, he's the Black Coffee of gqom. But because gqom is taken so lightly in South Africa, he's not recognised," he says. Here's a case in point. In June of 2018, FAKA was personally invited by Donatella Versace to attend Versace's summer/spring 2019 show which was soundtracked by their music. If you ask Bigger, we'd all been doing a lousy job of rooting for FAKA until that happened. "All of sudden, they started saying, 'Hawu, these guys. How?'"

The way Bigger made it and ultimately got to connecting with FAKA is because he used to spend his days in the Durban University of Technology library blowing up the email addresses of international booking agents. Today, Bigger regularly tours Europe.

As one of gqom's forebears, it's important that he found his success the way that he did. It was Nina Simone who said that, "You can't help it. An artist's duty […] is to reflect the times." Bigger is a nice guy who veils his timidity with humour and accepts everyone he meets with understanding. He then feeds that understanding into his art to bring people together.

Armed with his headphones and a DJ set, he can transform a room into a scene of euphoria in whch everyone can just be free. That sounds a lot like the dream our nation's freedom fighters have been selling for a few decades. Who knew gqom music would be the great unifier to do the trick? But if DJ Bigger Nzuza will have it that way, I can't complain.

This interview has been partially translated from IsiZulu and edited for length and clarity.