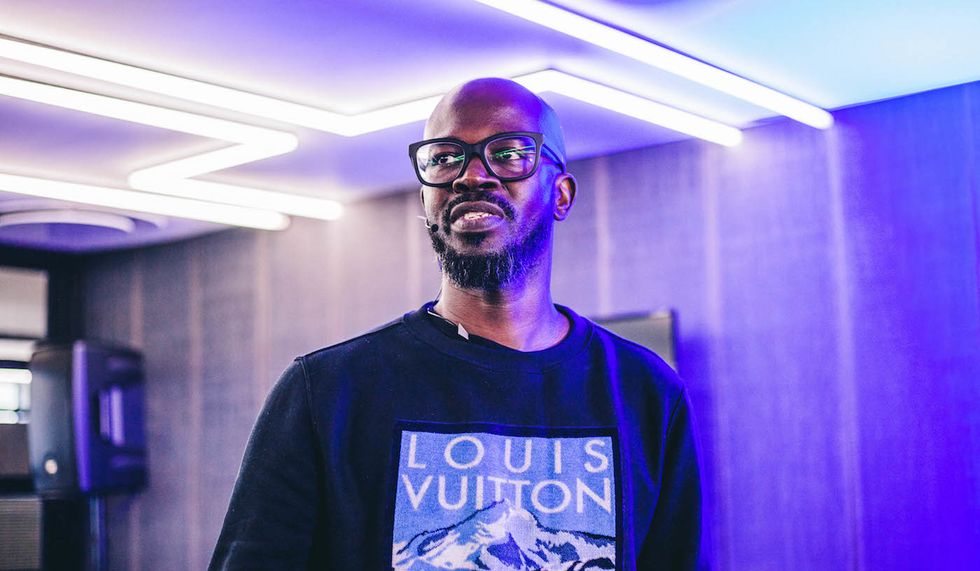 Black Coffee's company Soulistic Music is working on a music platform that will enable artists to own all the rights to their work.

South African house music titan, the DJ and producer Black Coffee, is gradually conquering the world. Just two months ago, he was in studio with Pharrell. Last year, he appeared on Drake's album/playlistMore Life. Artists such as Usher and Jay-Z have reached out to him for music, and he hangs out with Diddy quite frequently. He is the only African artist to land a show on Apple Music's Beats 1, and that's just to mention a few of his achievements. Black Coffee is living the life your favorite artist dreams of.

But he wouldn't want his son to follow in his footsteps. "My 18-year-old son loves music, and he tells me, 'I wanna get into music,' and I'm like, 'don't do that.' But I wanna be able to say, 'do it because there's a platform for you—like, if your song is good and it's uploaded here, that's all you need,'" says Coffee.

He is speaking to renowned TV and radio presenter Sizwe Dhlomo in front of an audience of industry peers and journalists, at an event in which he is sharing a work in progress; an app that he believes will help up-and-coming musicians who don't have proper platforms to showcase their music to the world. Named GongBox, the app has been in the works for the past "four years, going on five" by him and his team at Soulistic Music, his record label.

"But the industry we're in," he continues, "you could be the best and you wouldn't get a chance." He mentions that if he never met kwaito and house music legend Oskido, his career probably wouldn't have taken off the way it did. "Maybe if I didn't meet Greg Maloka or DJ Monde who put the bootleg of the Simphiwe Dana [remix I did] on radio… it's a mix of all these things, everyone's career depends on someone," he says. "I'm doing a song with Pharrell. If he decides he's not feeling it or let's do it next year, I will remain where I am. I depend on him to go to the next level. There's no structure where I can tell my son, 'you start here, then go there, and you'll win.' We are all here by luck."

GongBox is a music platform, similar to Spotify, Apple Music, iTunes and the like. But it's tailored for an African market. "If you think about how these products [Apple Music, Spotify etc.] are constructed," says Simukayi Mukuna, a member of Soulistic Music, who is explaining the technicalities of the app today, "the product team lives in Sweden, or Japan somewhere, and they don't have our context in mind; price of data, the size of the app. So all of these things, we are considering as we build the app. And when we are marketing and targeting people."

Mukuna states that GongBox when it's launched, will first be an Android app, because it's the most prevalent operating system among the smart phones the average South African uses.

But the reason streaming isn't as popular on the continent, particularly in South Africa, as it is in developed continents, is because bandwidth costs an arm and a leg. When asked what they are going to do about the accessibility issues, Mukuna answers like he knew that question was going to come. "The conversation we are having with service providers," he says, "they are super conscious of this, so the kinds of products they are talking about will address this. So for example, time-based access; so you pay R2 and you can access the product for a specific period without incurring any data costs." He adds that it's only a matter of time that data costs are lowered by companies like Vodacom, MTN, Cell C and Telkom in South Africa.

Coffee adds that platforms like Apple Music and iTunes don't work that well for (South) African artists. "When my song hits number 1 (on iTunes), and Beyoncé is number 2, you feel, 'I've made it,' but in numbers, it's a joke. Because you are only number 1 here, so the numbers don't match up. You can be number 1 for a month, and then you wait for a statement, and you only have $4. So we are trying to create a platform that's real, that's real-time, that's based on our charts, and if you are number 1, you are number 1 based on your sales."

When Black Coffee got the idea to create GongBox, iTunes was the biggest online platform for music. "So the first thing to consider was, 'how will we be different from iTunes?'" he says. "We understand our people more, we understand how they consume. We understand that most of them don't wanna subscribe, they don't want to be committed to pay, even if it's R9 a month. They'd rather pay R15 pay-as-you-go. So the plan is to have different types of payment systems, for instance mobile money. We are currently talking to networks to see if we can have our own currency, like Gong Box money. We want to have vouchers that you can find in spaza shops. We want to bridge the gap that the big companies aren't."

The years Black Coffee has spent in the music industry have opened his eyes to a lot that is wrong with it. With the project, he hopes artists who are coming after him won't have to endure the struggles he did. He has seen artists take "terrible terrible deals" from companies that didn't necessarily have artists' interest at heart. "I've always felt like our future is not certain, because it was in other people's hands," he says. "And I feel like that's how we've been as a continent. We've always been ready to give our future away to the next bidder who promised us whatever they brining. So my worry has always been, 'when do we start creating our own things?' And our own things, not just independent record labels."

He adds that, to walk the talk, Soulistic Music will cease being a record label, as he wants to see artists owning their catalogs and save themselves from the red tape that comes with their destiny being in other people's hands. "GongBox is a platform for an artist to say, 'I have an EP today, I've been recording this for the past two years, It's ready, I need a record label,' and I'm like, 'you actually need a platform.'"

But if the platform is free for all, how about quality control? That's one question that comes from the audience, to which Black Coffee answers, "The plan is to invest in mastering, and get a company to approve all the music that goes there. Also I get a lot of songs for my sets, and they are amazing. But when I get to play where I play and the sound system is so amazing, they embarrass me. And I understand why; we don't have means. So all the music that gets sent will be mastered, so we can have the same quality."

Black Coffee says he could have easily created his own app for him and Soulistic Music artists, but he felt the industry needs help. "Everyday," he says, "a kid will hit me up about a demo, and I listen to the music, and it's the most amazing music I've ever heard. But there's nothing I can do."

At this point, everyone in the room is still not clear what exactly GongBox will look like, or how it's different from other streaming sites and online stores. Coffee explains that the app will save artists the trouble to use multiple platforms to post their music, videos and photos. "Sometimes we create all this amazing content," he says, "but the only place to share it is on YouTube. Like I go to DJ PH's mix on YouTube, and then Justin Bieber pops up, and I start listening to Justin Bieber first, and then it leads me to somewhere else and I end up not watching what I came there to watch."

According to the DJ, GongBox will allow artists to "direct all their traffic to one place." In the app, he says, every artist will have a "box" where all their content will be found. "In my box, that's where you'll find everything that I do. If I want to post that I'm doing Ibiza on the weekend, that's where you gonna find it."

But Coffee is already documenting his journey pretty well on Twitter and Instagram. He just feels there's a lot of distraction on those platforms. "Twitter is for entertainment, that's it," he says. "We try to post our work there, but it's for entertainment; people wanna be entertained. That's why I will tweet, 'my new song is coming,' or 'I'm on my way to Coachella,' and they're like, 'ooh nice shoes.' And then the conversation starts being about shoes; 'oh they're big, what size are you?' And then it goes left."

At this point, it sounds like Black Coffee's goals are seriously audacious and scary—to eliminate Twitter, Facebook, Instagram, SoundCloud, Apple Music, Spotify, Bandcamp, iTunes with just one app. I've always felt the reasoning behind artists having social media accounts was because their fans are already spending most of their time on those platforms. Additionally, there's great synergy between all the aforementioned apps—an artist releases their music on Apple Music, Spotify and/or SoundCloud and share it to their social media followers.

But not in the future Black Coffee and his team are envisioning. "GongBox could be, in the future, that one space where endorsements happen, instead of companies going to Twitter," he says.

"I play a lot of South African music on my sets, but there's no place to find it. I would like that if there's someone who appreciates African music, there's that one store they can go."

I can't help but think of platforms that, just like GongBox, promised a revolution, but have since disappeared. Circa 2012, there was KasiMP3, a website that allowed artists to release their music for free and get paid royalties once their songs reached a certain number of downloads. A majority of artists who uploaded their music on the site still haven't received a single cent in royalties.

This is not to say GongBox will suffer the same fate, but, just like KasiMP3 before it, it sounds like a great idea on paper. But only time will tell if it will play out in real life the way it does in Coffee and his team's heads. For the sake of all the great artists that never get heard, we sincerely hope it does.