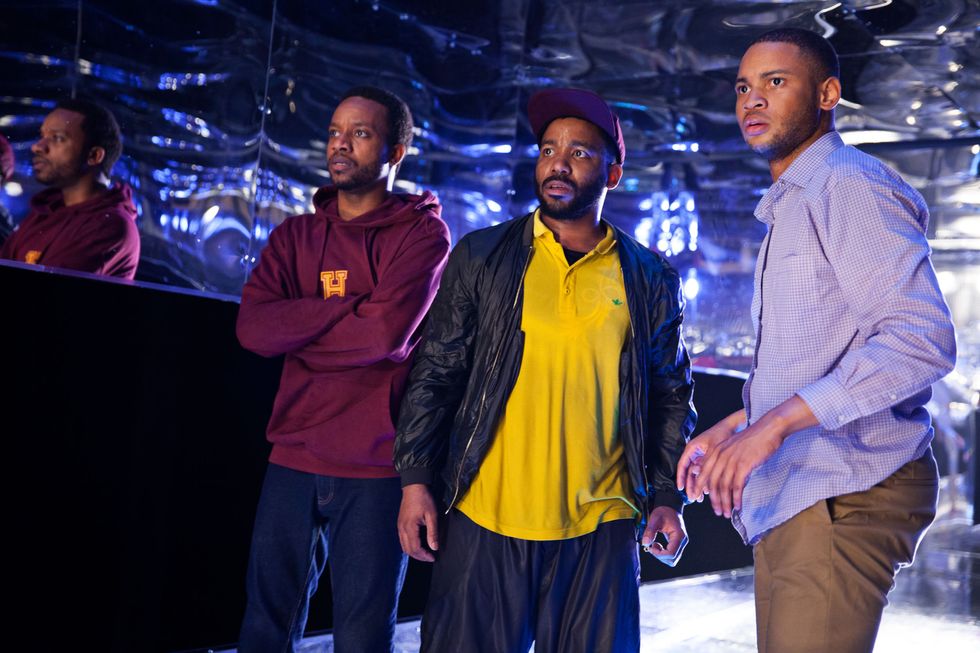 Written by James Ijames, a Philadelphia based performer and playwright, and directed by Saheem Ali a Kenyan-American who lives in New York. The main character, Tiny, is played by the Guinean-American actor Sidiki Fofana. It ends this Sunday.

“Kill Move Paradise” addresses the issue of young African Americans who have been killed in different ways, including by police brutality.

Ijames, Ali and Fofana sat down with OkayAfrica to discuss the play's relationship to police brutality, how art and storytelling can help spur social justice and for Fofana, what his West African background means to his work as an actor.

Placide Magambo for Okayafrica: James, can you explain how you got the idea for writing “Kill Move Paradise?”

James IJames: Recently we saw African-Americans and other people of color being killed by law enforcement. I thought of how I could find ways to write about it without necessarily writing about the police officers nor by using the typical information found in the morning news about the family that lost somebody.

I kept looking at these people who have been killed and tried to tell the story of what happens when somebody is killed by police. We start to analyze who these people were before they died—whether they were good or bad people. I feel like this is a sort of trauma that happens even after they die—to their reputation, to their name, to who they are. I wanted to write a play that makes people consider how they talk about these people who have been killed by law enforcement.

OKA: Saheem, as the director, please tell us about what the audience can expect from this play.

Saheem Ali: The play is about what is happening now in America, where a lot of young black men are being killed at the hands of the police. Not only white men are killing black people, but also black people are killing black people. It is a problem with the institution of law enforcement in this country. When James Ijames was writing this play he really examined this epidemic that is happening and combined it with theater traditions from the Greek tragedies to Samuel Beckett.

He took this phenomenon as an inspiration to tell this story. Personally I have never seen a play like this one and when I red the script I was very excited. It is a challenging piece because it is very epic with some big gestures and I am glad that we found our way to tell the story at National Black Theater in Harlem which is a great institution of African American history. It is a very important story which needs to be told.

OKA: Recently we have seen the rise of movements against police brutality including Black Lives Matter. How does “Kill Move Paradise” fit into this discussion?

Sidiki Fofana: This play is going to touch on so many things. So many who say that they believe in justice are never around—they don’t show up, whether it is dealing with immigration or racial, religious and ethnic divisions. In this play we want to show that we are the same. We are all human beings. Come understand who I am and let me know who you are. This play will open people’s eyes in so many ways especially to what is going on in our political system. This play is about four young men and what we deal with and how the highest level of love is the only way forward.

OKA: Do you consider your Guinean background when you are acting?

Sidiki Fofana: I make sure that the people know my culture and where I am from, so that when people come to see the play know, they know my roots are in West Africa where acting is not something that is very big. I bring my culture, who I am, and my background so that maybe when I am the first actor from a West African culture in Hollywood, people will understand better the culture that am representing. That is crucial for me.

OKA: James, when you had the idea for this play, did you ask yourself why African-Americans are the target of so much police brutality?

James Ijames: The reason why I think that African-Americans are the target of police brutality is that there is something in the culture that makes people fear black and brown people. It is very hard to understand. A police officer can say that I was afraid of my life even if the person he killed had no weapon or was not even necessarily violent. Sometimes they are killed with their hands up. Co-operative people still get killed.

There is something in this culture that devalues the lives of the black and brown people—they are not seen as valuable and they are treated as such. My hope is that the play will help show that that they are people, they have lives, they have families, that their lives matter.

OKA: Saheem, do you really believe that this culture of storytelling can create positive change?

Saheem Ali: Politicians make change by creating laws, but what we can do as citizens is to make our lawmakers accountable for their actions. As artists, the only thing we can do is to tell the stories as best as we can and the audiences who come to watch the play can leave with a message of what they can do to make difference.

OKA: James, how can Americans get involved in this action?

James Ijames: I want African-Americans and other audiences to get involved in any way that they can. Whether it is marching in the street, writing to their representatives, writing a play or poem that makes people think, people should be trying to find the solution. My hope is that the people who are watching this play, will be inspired to be more active and to do something and to say something. To me that is a huge first step.