Here are all the highlights from the 2018 MTV Movie & TV Awards.

The 2018 MTV Movie and Television Awards went down last night in Santa Monica, California, and it was a standout show for a couple of reasons.

The first being that it was hosted by none other than Tiffany Haddish, who also took home Best Comedic Performance for her unforgettable role in Girls Trip. She became the first black woman ever to host the show.

Another major highlight was watching the Black Panther cast and crew come through and sweep the show.

Haddish got some of her Girls Trip costars Queen Latifah and Jada Pinkett Smith together for a hilarious parody of Black Panther's ritual battle scene. Check it out below.

The culture-shifting superhero movie took home Best Movie, while leading man Chadwick Boseman earned Best Performance in a Movie as well as Best Superhero, he graciously gave his award to James Shaw Jr., the man who stopped a mass shooter with his bare hands at a Tennessee Waffle House.

Michael B. Jordan took home the award for Best Villan for his portrayal of Erik Killmonger, and gave a memorable acceptance speech in which he called out the disreputable Rosanne Barr, and spoke on his co-star's behalf by telling folks to stop saying "Wakanda forever" when they see Chadwick Boseman on the street. "Y'all taking the Wakanda thing a little too seriously" he joked.

Watch his speech below.

The Black Panther stars also did their thing on the read carpet, with Winston Duke (M'Baku) rocking the popular Nigerian World Cup kit.

See more pictures from last night's award show below, and see the full list of winners underneath.

When 30 percent of Colombia's Black citizens disappeared from the data overnight, a group of Afro-Colombian activists demanded an explanation.

It was the end of 2019 when various Black organizations protested in front of the census bureau—The National Institute of Statistics and Informatics (DANE)—in Bogotá, Colombia to show their dissatisfaction about what they called a "statistical genocide" of the black population. The census data, published that year, showed 2.9 million people, only 6 percent of the total population of the country, was counted as "Afro-Colombian," "Raizal," and "Palenquero"—the various terms identifying black Colombians.

Why did the population of Afro-Colombians drop so drastically? 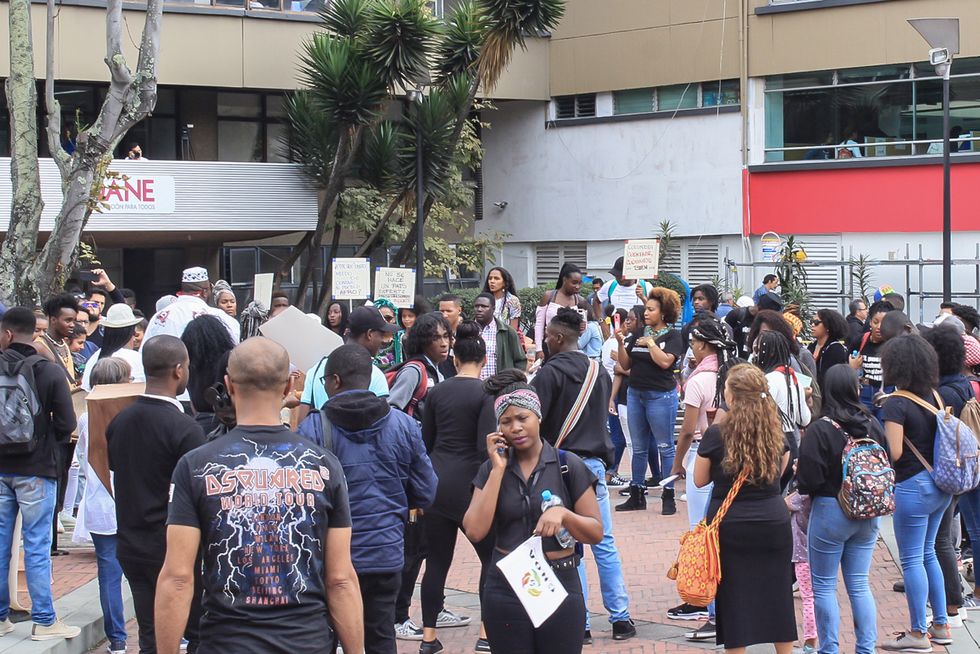 Last year, a crowd of activists gathered in Bogota to protest what they saw as erasure of Black communities in the Colombian census.

In the latest national census report from 2018/2019, there appeared to be a 30.8 percent reduction of the overall group of people that identified as Black, Afro-Colombian, Raizal, and Palenquero, as compared to the 2005. After this controversial report, an Afro-Colombian civil rights organization known as the National Conference of Afro Colombian Organizations (CNOA), officially urged DANE to explain the big undercounting of the black population.

This wasn't a small fight. Representatives who hold the special seats of Afro-Colombians in Colombia's congress asked the census bureau to attend a political control debate at the House of Representatives in November 2019 to deliver an accountability report. "The main goal of doing a political debate was to demand DANE to give us a strong reason about the mistaken data in the last census in regard to the Afro population," said Ariel Palacios, an activist and a member of CNOA.

At the debate, the state released an updated census data report saying that, almost 10 percent of the Colombian population—4.6 million people out of 50.3 million—considers themselves Afro-Colombians or other ethnicities (like Raizal, and Palenquero). But despite DANE trying to confirm the accuracy and reliability on the latest census report it was clear that, for a variety of reasons, Black people were missed by the census. The state argued that their main obstacles with data collection were related to the difficulties of the self-recognition question, as well as security reasons that didn't allow them to access certain regions. They also admitted to a lack of training, logistics and an overall lack of success in the way the data collectors conducted the census.

How could they have counted Black populations better? 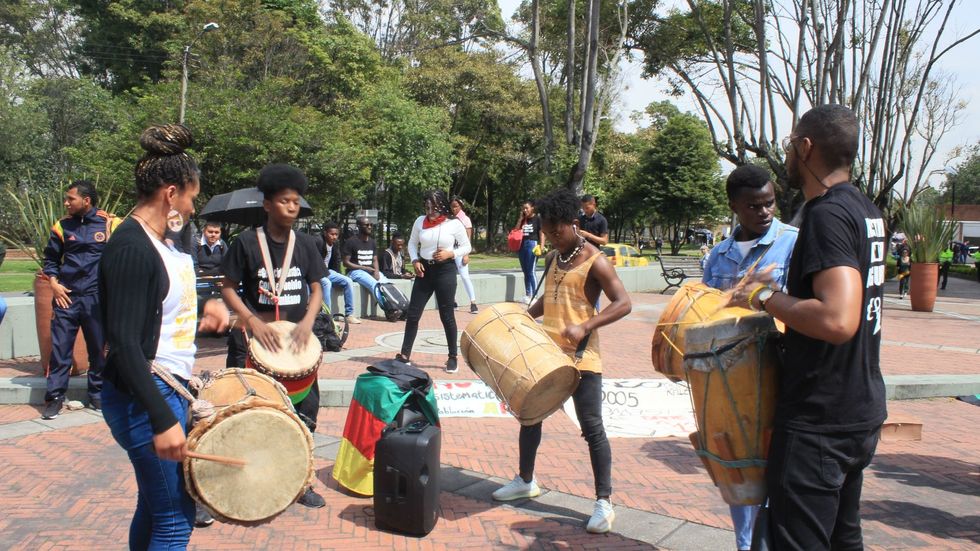 Drummers performing during a protest against the Colombian census bureau's erasure of Afro-Colombians from the 2018 census.

These arguments were not reasonable for the civil rights activists, partially because the state failed to properly partner with Afro-organizations like CNOA to conduct or facilitate extensive informational campaigns about the self-identification questions.

"CNOA has worked on self-recognition and visibility campaigns among the Afro community and this census ignored our work," says priest Emigdio Cuesta-Pino, the executive secretary of CNOA. Palacios also thinks that the majority of Afro-Colombians are aware of their identity "we self-identify because we know there is a public political debate and we know that there is a lack of investment on public policies."

That's why it is not enough to leave the statistical data to the official census bureau to ensure that Afro-Colombian communities are fully counted in the country. And the civil rights activists knows that. They made a big splash in the national media and achieved visibility in the international community.

Thanks to The Washington Office on Latin America (WOLA), a human rights organization, Palacios traveled to D.C to meet with Race and Equality institution and a Democratic Congressman. "We called for a meeting with representative Hank Johnson to talk about the implementation of Colombia's peace accords from an Afro-Colombian perspective but also to address the gross undercounts of its black population," says Palacios.

For the activists at CNOA, the statistical visibility of the Black population is one of their battles. They have fought for Afro population recognition for almost two decades. "Since the very beginning CNOA has worked on the census issue as one of our main commitments within the statistical visibility of the Afro-Colombian people," says priest Cuesta-Pina. Behind this civil organization are 270 local associations, who work for their rights and collective interests.

The activists want to raise awareness on identity. Because according to Palacios, "In Colombia, there is missing an identity debate—we don't know what we are. They [the census bureau] ask if we are black, or if we are Afro-Colombians. But what are the others being asked? If they are white, mestizo or indigenous?" Palacios believes that for "CNOA this debate is pending, and also it is relevant to know which is the character of this nation."

Afro-Colombian Populations and the Coronavirus 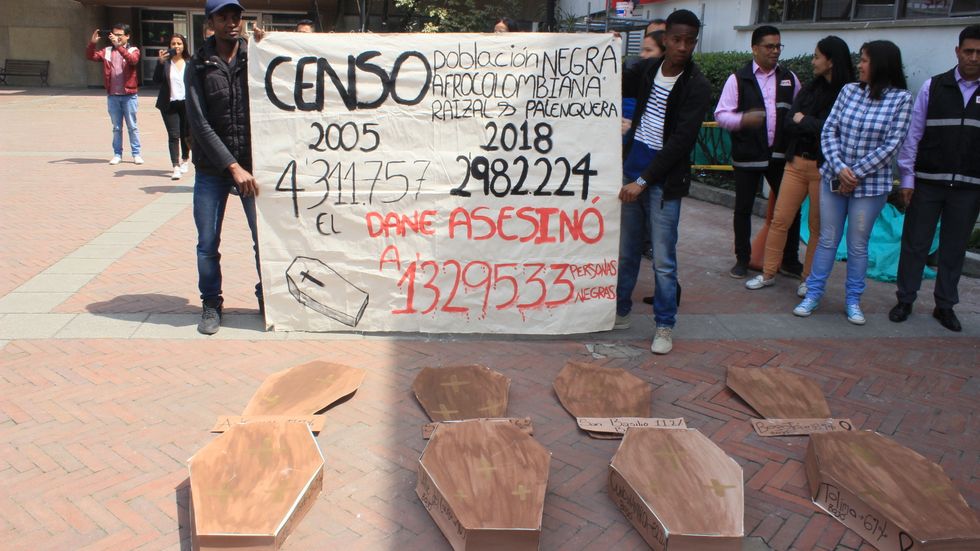 Colombian civil-rights activist insist that undercounting Afro-descendants can have a real impact on the health of Afro-Colombian communities, especially during the COVID-19 coronavirus crisis.

Even though the state recently "agreed with to give us a detailed census report" and make a different projection with the micro data, says Palacios, now with the Covid-19 emergency, CNOA and the government has suspended all meetings with them, including cancelling a second congressional debate and the expert round table meeting to analyze the data.

Unfortunately, it is exactly in situations like the Covid-19 emergency where data analysis and an accurate census report would have been useful. According to the professor and PhD in Sociology Edgar Benítez from Center for Afro Diasporic Studies—CEAF, "Now it is required to provide a reliable and timely information on how the contagion pattern will spread in those predominantly Afro regions in the country and what is the institutional capacity in those places to face it," says Benítez.

He adds that this information is "critical at the moment because the institutional capacity is not up to provide it at the current situation". That's why the Center for Afro Diasporic Studies plans to work with DANE information from the last census. According to Benítez, "We are thinking of making comparisons at the municipal level with the information reported in the 2018 Quality of Life Survey, in order to have a robust and extensive database as possible on the demographic, economic and social conditions of the black, afro, Raizal and Palenquera population in Colombia."

The Nigerian star was arraigned on Wednesday for attending a party at the home of Nollywood actress Funke Akindele.

Naira Marley has been pardoned by Lagos authorities, after being arraigned in Lagos for attending a party at the home of Nollywood actress Funke Akindele last weekend, which violated the city-wide lockdown.

According to a report from Pulse Nigeria, the "Soapy" singer and two other defendants—politician Babatunde Gbadamosi and his wife—were ordered to write formal apologies to the Government of Lagos, give written assurance that he will follow the ordinance going forward, and go into self-isolation for 14 days.

The U.S.-based Cameroonian artist speaks to us about her upcoming EP, Broken English, and how she's navigating the world of music amid the coronavirus outbreak.

The South African musician is raising funds in an effort to donate a million rands to organizations fighting the COVID-19 outbreak.