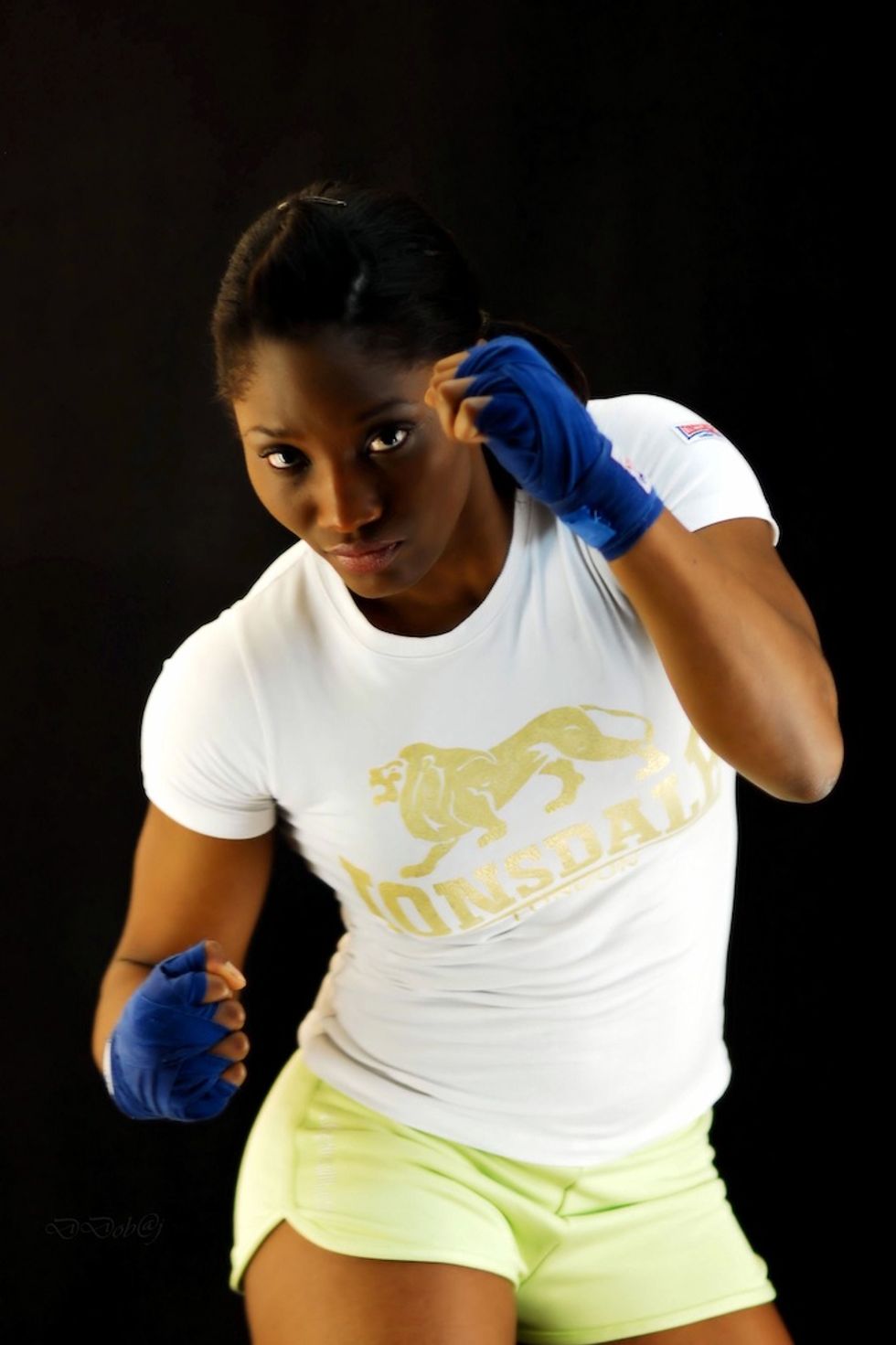 Recently a press release about up-and-coming female boxer Bintou Yawa Schmill has been circulating the African and African diaspora blogosphere (read it in full below). While the release seemingly aims to showcase the fighting prowess of a new talent on the German boxing scene, it problematically describes Bintou as a 'lion queen' and a "totally black African breed". The words bring to mind the exoticising and dehumanising language of slave auctions and recalls the way that slavery as an institution associated black people with bestial behaviour and animalistic actions. Despite being terribly written, it seems like a genuine attempt to incite interest (especially financial interest) in Bintou's career. As such, the release ends up speaking volumes about the relationship of race and gender to the perception and portrayal of African women in sport.

At first glance, the release revels in a fierce portrayal of femininity, female athleticism, and power in the male-dominated genre of boxing, and sport writ large. However, the masculinising language immediately groups the boxer within the broad but fixed category of "African ladies," implying that she somehow transcends it to become a success story for the continent. This perpetuates a double bind of femininity and athleticism which women in sports often experience (see Castor Semenya's makeover following gender controversy and Nigeria's female polo player). A double bind here refers to the two ideals one must strive for, even though succeeding at one one leads directly to failing to meet the other. From the outset, Schmill's talents in the ring have been linked to a rigid gender binary:  her recent successes are to her credit only insofar as she was able to "bend the gender rule".

Mainstream Western media is still largely hostile to women in sport who are not marketed in terms of both their sex appeal and almost incidental athletic abilities. In contrast, the press release on Schmill abandons femininity altogether in favour of aggressive animalistic analogies which cordon off her sex appeal but also reduce her to an object, an exceptional "case study". The question remains, to what extent can this Germany-based Togolese boxer be viewed as an independent force to be reckoned with considering the discourses of containment that aim to reduce her threat to the West - and, let’s not forget, to the masculinity of her potential donors - because of some  longstanding cultural myths about boxing as a male domain and Africans as animals?

Like most normative presentations of women in sport, the focus of this story showcasing one woman’s boxing is about the male struggle to protect a collective sense of patriotism, under a familiar pan-African philosophy of Ubuntu, with a female boxer as a vessel who has to relinquish her femininity for that same sense of patriotism, and whose success is depicted as dependent on the support of her homeland.

We couldn't find any inkling that this press release was credibly linked to Bintou or her managing team, but as it stands, someone needs to get Bintou a new (legit) publicist.

The press release in full:

Ms. Bintou Yawa Schmill is a 28 years old woman and a totally black African breed, 1.71m from Togo but based in Germany. She started her boxing career at a very tender age and now something she did as an amateur has become a success story. She has wickedly and mercilessly punched competitors winning 24 fights and drawing two in the 64Kg welterweight category.

Her history shows that since 2007 as professional boxer she has an unbeatable record of 4 fights and 4 wins including 3 KO.

Her case study is exceptional, she has not only broken the gender rule but she is representing the African continent in a Boxing ring, punching evil out the brains of her competitors. Bintou is the Lioness that roars and the Lions make a way. Now she´s back on stage, live and ready for a face2face catch, one on one.

Any brave hearted out there to sponsor and make a name with Bintou? Bintou needs you to make it happen… a man is a man because of another man –UBUNTU