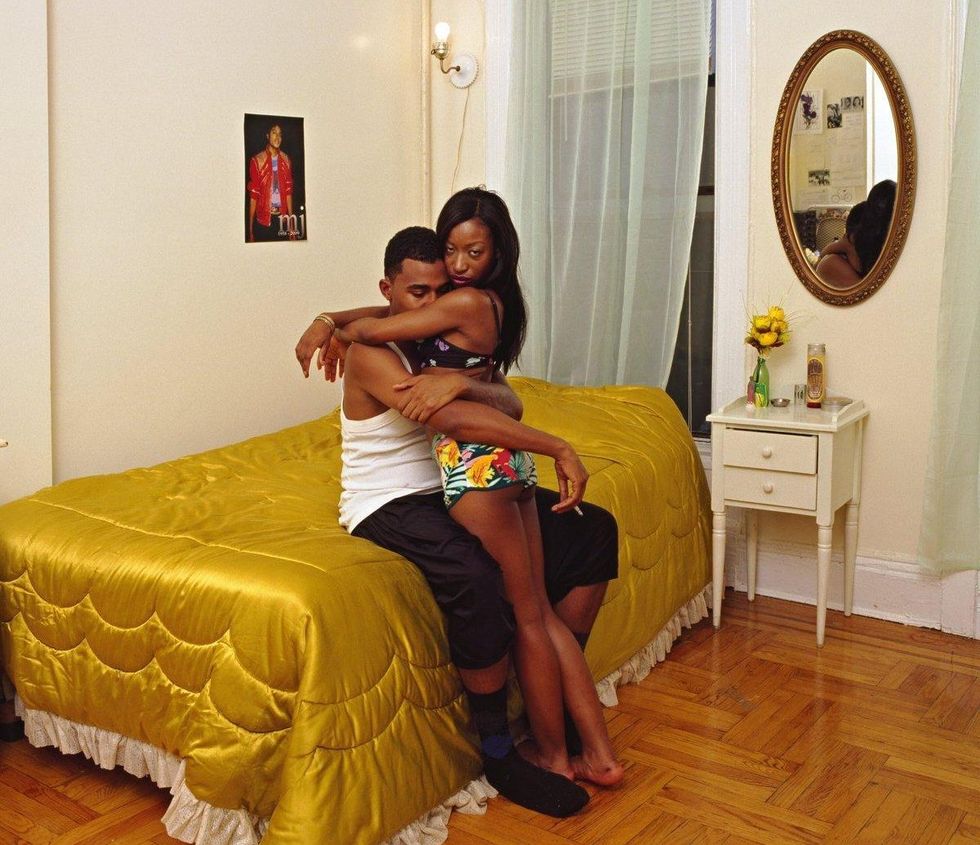 Dev Hynes tells us about the Sierra Leonean and West African influences on his new Blood Orange album 'Freetown Sound.'

Dev Hynes is sitting on a bench on the north end of Manhattan’s Washington Square Park, just to the side of the square’s famous arch.

The singer and composer has asked me to meet him to talk about his forthcoming album Freetown Sound, his third under the alias of Blood Orange, and one that, like his previous release Cupid Deluxe, has been described largely as a work about New York City.

While much has been said about Hynes’ increasingly sparse pop songwriting—aside from his own output, he’s also known for writing hits for Solange, Carly Jae Repsen, Sky Ferreira, FKA Twigs and others—not much has been revealed about the larger Sierra Leonean inspiration behind his work.

Hynes’ father hails from Sierra Leone and his new record is named after the West African nation’s capital city of Freetown.

As its title implies, Freetown Sound—which was surprise released today—is a way for Hynes to come to terms with the influence Sierra Leone has had on his music. You can spot Hynes dancing in front of a painted Sierra Leonean flag in the new video for album single “Augustine,” (below) in between shots of New York City rooftops.

But the album is also a way for Hynes to make sense of the ruptured pieces of his own identity, as he explores his mother’s Guyanese heritage, themes of sexuality, race politics, religion, and the city soundscapes of London and NYC.

True to to the multifaceted make-up of Hynes' adopted home of New York, its Sierra Leonean and West African influence is only found in fragments, corners, and samples sprinkled throughout the album's songs.

Below, Dev Hynes tells us about the West African influences on Freetown Sound, from the '70s Nigerian band The Funkees to a photograph taken in Sierra Leone by Flurina Rothenberger.

Can you tell us about your own background?

Growing up, [their background] wasn’t discussed that much. I think it's the case of people of my parents' generation who moved to places like America or London, there was never really a thought about the idea of sharing that background and how important it is to the kids. On the other side, kids like myself didn't necessarily think of the importance of hearing about it from the parents.

I makes me think about that Master of None episode about the parents, and it's so true. I had such a similar experience a year or two ago, where I realized I just didn't know much or think about my background. As I get older, I want to know more than just, "born: London 1985."

How has that personal search influenced the new album?

The album is kind of like multiple lenses. It's me being born in London and moving to America the same age that my parents moved from where they were born. From there, looking at my parents—it's through those eyes.

It's also trying to imagine the eyes of my parents, of what they've seen and what they've gone through. For example, my mother, the last time she went to Guyana was the year before I was born. It's not really on her mind to ever go back. It's not on my dad's mind to go back to Sierra Leone.

Have you ever been to Sierra Leone?

I haven't been yet, no. That was the thing, I wanted to make this music before going.

I thought about going, I thought it would be really cool to go and work on music there, but I really like the idea of making an album that was almost like looking at it through a haze, which was kind of like what my last album [Cupid Deluxe] was like. I lived in New York for five years, but I was looking at New York through a lens. I wanted to do that with Sierra Leone.

If Cupid Deluxe is your New York City album, could Freetown Sound be considered your Sierra Leonean album?

Kind of. It's weird. Honestly, it's like putting another layer on top of Cupid Deluxe. It's still in some aspects very New York, almost more New York. It's always more unique in terms of the multicultural aspect of it. Which is, to me, quintessentially New York.

I've been talking a lot to my parents about the music that reached them [in Sierra Leone and Guyana]. It’s almost like a TV show where, later on, they do a flashback and you're like, "That's why!" My dad would play a lot of classical music growing up, which then made then made me start playing piano and cello. I'm hearing classical music and jazz in the house, as well as UK soul and R&B stuff. My brothers really liked hip-hop and my sisters were listening to Nirvana and Blow and things like that.

The jazz references I try to throw into the record were solely relating to the music that would reach Sierra Leone, and reach Guyana. The hip-hop references are a lot more weird, it's more like music that trickled down.

I was trying to interject those moments in the record, so it had a real feel of radio and different things poking through. Different styles coming out, and just these little trails. Again, trying to bring it back to New York, with the street sounds. It's a similar thing but in a very different way. In New York, it’s almost like an overbearing sense of sound.

Are there any specific West African bands or genres that directly influenced the album?

Yeah, there are actually. I've got a bunch of vinyl from West African rock bands. I've always loved that and I tried to use it more [in the album].

There's this guy who was a guitarist in this Nigerian band The Funkees. There's a song called "But You" on my record in which I was trying to do his style. It's like pop, but rhythmic. Then in “Juicy,” I was really trying to do that.

There's different moments that are musically indebted to the rhythms of West Africa, and lyrically as well. In the end of the song “Augustine,” I sing in Creole, you can hear it slightly at the very end.

Is that the voice of a Sierra Leonean woman throughout “Love Ya”?

There’s a story behind that one. Last year there was a book by photographer Flurina Rothenberger called I love to dress like I am coming from somewhere and I have a place to go that I was in love with. The best thing about the book is that it's from her 15 years of going to West Africa and back. You feel the heart in it. So I found her contact online, because I wanted to know more.

There's this photo of the back of this guy looking over a city, holding a flower. It's a crazy picture, you can create stories from that picture. When I spoke to [Rothenberger] about it she said, "Oh yeah, he's looking over Freetown in Sierra Leone." I was like, that's insane, because I'm making this album and the photo reminded me of my dad. It's a beautiful photo.

Flurina actually told me about this thing where these people go to Sierra Leone and give people flip cameras to make videos. In this one video I'd seen the day I made "Love Ya," this woman is talking about how the rebels are coming to Freetown and destroyed her house, terrorized everyone, killed people.

It's really horrible, then at the end she starts saying how much she believes in God, and how God has helped her. I can't remember her exact words, but it's like she has this hope at the end of it—which is essentially what I talk a lot about on the album, to love people. Religion is this huge beacon of hope. It can be such a beautiful thing. At the same time it can be such a complete tragedy and a huge destructive force. Also on top of that, the reality is that it was brought to a lot of these places with evil intentions, as a type of controlling mechanism.

It's such a complicated and mixed subject that has so many pros and cons, I don't have answers, I'm literally just asking questions, and just thinking out loud through the music.

“Love Ya” was a way of uniting my parents on a track, because the main melodies are from Eddy Grant, who grew up in the same place in Georgetown, Guyana that my mom did.

Right, following on your Guyanese background, you’re at this intersection of identities, with also growing up in London then moving to NYC. Is Freetown Sound an album for displaced identities?

I’m at a very different point in my life. I turned 30 in December. I'm just thinking about different shit, and very much into the idea of understanding family and my life, and roots and heritage, and where I'm at now. It's definitely music for displaced people that are questioning things.

The album also deals with racism in modern America, particularly the many shootings of the past years.

Yeah. It's just on my mind. I go to all those marches and I record all the audio. [The song] “Hands Up,” that's a sample from my cassette at the end that I made out of  the “Hands Up, Don't Shoot” chant. I took that and I kept the beat under it.

It's definitely so heavy on my mind, and “Hands Up” definitely addresses it more. That's probably the song that addresses that kind of police brutality and that kind of racism the most. Race politics are discussed at different points on the album in varying ways. Some more literal than others.

A lot of them are just questions, I'm just thinking out loud.

'Freetown Sound' is available now on your preferred music platform.