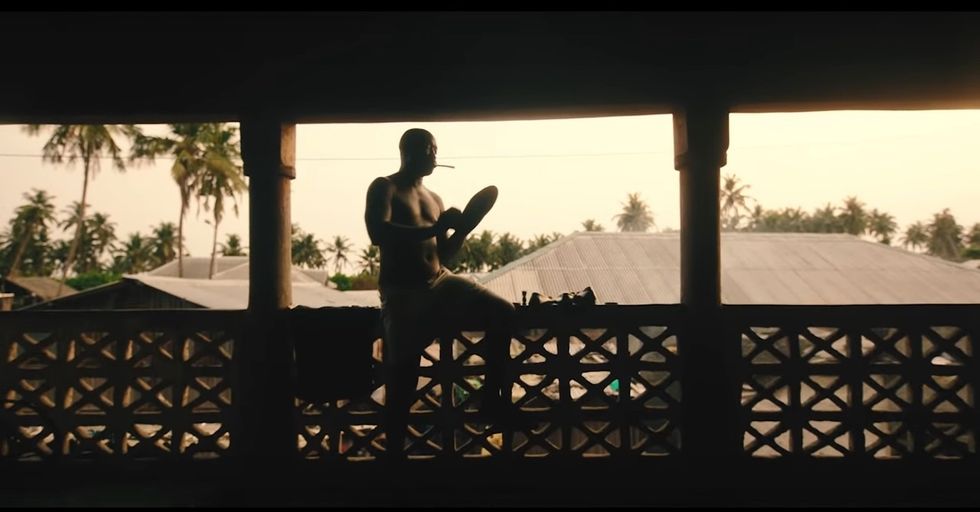 Dangote the man isn't a true hero of the masses, but "Dangote," the song, serves to show them that they can surmount poverty using his wealth as a guiding light.

In Nigerian superstar Burna Boy's new video for his song "Dangote," the desperation of the poor and their oppression is laid out in a winding narrative. There's an unlicensed pharmacist hawking drugs in a public vehicle, a preacher trying to win some souls and pass a plate for donations. There are two car crashes, a case of sexual harassment, a pickpocket scoring a phone, and a young hustler who is crippled by ailing transportation. He continues his journey on foot, finding solace in the music, which leads him to Fela Kuti's symbolic home, the New Afrika Shrine, where Burna Boy awaits at the end of the arc. Once again Afrobeat is used as a peg to symbolise music's close affiliation to the people.

Burna Boy, is Nigeria's most on-form musician, and the release of his new single last weekend named after Africa's richest man, Aliko Dangote, is an angry indictment of poverty in Nigeria. The video, shot by the renowned Clarence Peters, has received rave reviews, with some Twitter users excitedly crowning it "video of the year."

Burna Boy (real name Damini Ogulu) has gained wide praise as an afro-fusion artist in tune with the suffering of Nigeria's poor. This is considered rare in a country where pop stars are often insulated from the plight of the masses by their wealth. In that context, Burna Boy often tries to embody the rebel spirit of Fela, a conscious music legend, with whom he has close family ties. Kuti, the pioneer of the Afrobeat genre, was famous for his political activism during the country's era of military dictatorships. Burna's mother and manager, Bose Ogulu, once danced in his band. His grandfather, Benson Idonije, managed Fela at some point in the legend's career.

Burna's art has always drawn elements from Fela. The Afrobeat sound and aesthetic repeatedly shows up in his art, refined, fused with modern sound patterns, and updated for the times. From earlier hit singles such as "Run My Race," down to his recent meteoric run in 2018, led by "Ye" and "Gbona," there's always an allusion to Fela's art. "Dangote" is no different.

Here is where Dangote sticks out: where Fela expressly embraces the poor and takes aim at the elite, Burna boy opts for a different approach, "Dangote still dey find money o…," he sings, elevating the world's 64th richest man, Aliko Dangote as a shining example of pure hustle. He does this with good intent. Dangote who recently became the 64th richest man in the world, with a reported net worth of $16.6 billion, represents the complete aspirational picture of the Nigerian dream. People see his wealth and they want that for themselves.

But this Dangote isn't exactly a true champion of the people. According to reports, Dangote is a huge financier of the political class. Opening his coffers to fund elections of the country's past presidents. As a reward, he influences economic policies to increase his worth, regardless of what happens to the masses. He owns a monopoly on the cement industry and continues to grow richer in a country where 6 people fall into poverty every minute. According to the World Poverty Clock, 82 million of the 180 million population (42.4 percent), live in extreme poverty. But these people don't care about Dangote's business. He has money. However he got it is inconsequential. They simply want some of it.

With the help of actors, stuntmen and extras, the video walks us through poverty as a state of disadvantage, and idlemen breeding desperation, which becomes a slippery slope. Desperate people lose their humanity, when that happens, they are open to doing anything for survival. Anything, including internet fraud, locally known as 'Yahoo Yahoo' or 'G' in Nigeria. Problem is, it is illegal, and when the law strikes, it never ends well for the poor person, who is now a poor criminal.

There's also an element of praise-singing, which is a core element of traditional Yoruba music genres. Right from the 1980s, apart from the business class, the political class, through patronage and support, played a major role in the success of any artist. Legendary Fuji and Apala luminaries such as King Wasiu Ayinde Marshall aka KWAM1, Ayinde Barrister, the late Haruna Ishola, entrenched praise-singing as an important part of their creative process. There are countless records made in honour of Nigeria's business and political elite. This is still a very common practice in today's traditional music circles. Contemporary pop artists who grew up assimilating that culture picked it up, choosing to glorify the 'heroes' of their time through a more subtle form, which shows up in music as name-dropping.

Burna Boy's 'Dangote' elevates the businessman and props him up as the aspirational model for everyone else. Never mind that he is in bed with the oppressive government—he deserves praise for being an aspirational figure, inspiring millions of the country's youth. He is the true Nigerian model of success. He is a worthy recipient of high praise.

Burna Boy's biggest credit here has to be the galvanization of Nigeria's poor. While Fela Kuti's conscious template is largely made up of speaking hard truths to power and inspiring the people with his boldness, Burna speaks hard truth to the people, pushing for them to take control of their lives, and rise up, regardless of the system. The Nigerian spirit is defined by endless hustle. It's a message that touches at the core of the Nigerian spirit, and is to be the catalyst to giving him another hit. Dangote the man isn't a true hero of the masses, but "Dangote," the song, serves to show them that they can surmount poverty using his wealth as a guiding light.