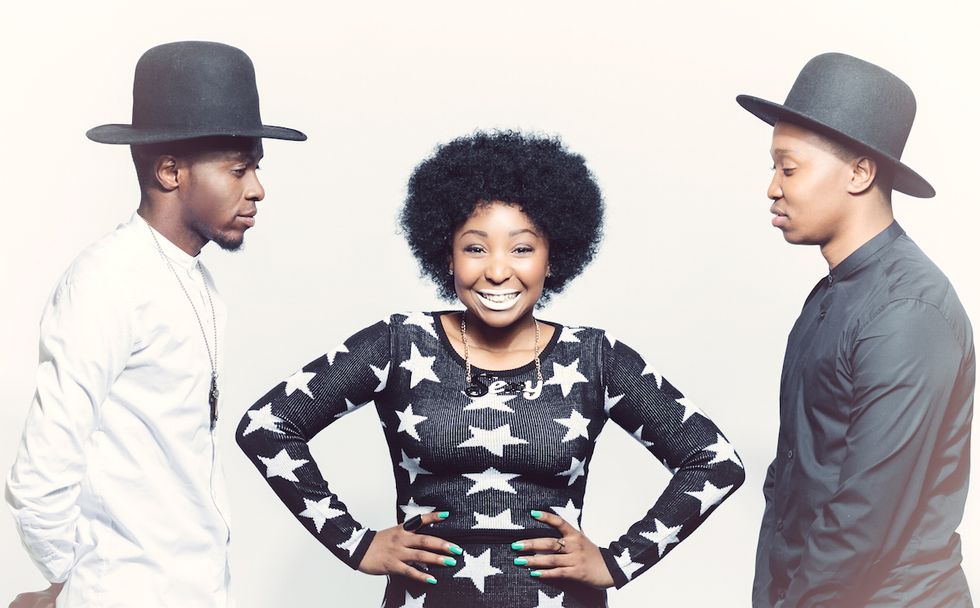 For 17 years, the Cape Town International Jazz Festival has been a premier spot to experience world-class musicians. This year’s festival is no exception. Big international acts like Cassandra Wilson, Amadou & Mariam, Mick Jenkins, BADBADNOTGOOD and Angie Stone are all set to take the stage this weekend alongside South African favorites like Tribute ‘Birdie’ Mboweni, Mafikizolo and Christian Tiger School.

“It’s a lifestyle festival,” CTIJF Director, Billy Domingo, once said about the annual event’s extensive program. Over the years, the festival has grown to encompass more than just live music. A fashion show, a photo exhibition, a workshop on journalism and art writing are just a few of the events taking place in conjunction with the festival this week.

Below, we pick out five things you need to see at the 2016 Cape Town International Jazz Festival.

It’s been ten years since Eastern Cape-born photographer Cindy Waxa started taking photos at the Cape Town Jazz Fest. At the time, she had just completed her degree at Peninsula Technikon (now known as Cape Peninsula University of Technology), and landed a job as a staff photographer at Independent Newspapers in Cape Town.

“I’ve photographed Hugh Masekela, Pu2ma, Deedee Bridgewater and The Manhattans last year,” Waxa says about the long list of acts that she’s photographed, which extends to Erykah Badu, Zonke and Jonathan Butler. This week, 11 years worth of Waxa’s jazz festival photos are on display at the annual CTIJF Duotone exhibition, where they’re being shown alongside work by Gregory Franz and Johan Samuels.

Taking news photographs is spontaneous, Waxa tells us. “With jazz, it’s the same—singers or instrumentalists might move here and there during a performance. The only difference is the lighting; it changes from red to green, so it’s really about technicality,” she says.

“It’s always different,” drummer Tumi Mogorosi says about playing his 2014 debut album. “On each occasion that we perform, we are rearticulating Project Elo,” Mogorosi tells Okayafrica. “There are so many reinterpretations of the music, and this all stems from the oral nature we come from.”

“Apart from playing music off the album, we’ll also use the CTIJF platform to let the festival organisers know that we’ve recorded a new record,” Mogorosi says. He hopes to release the album, titled Sanctum Sanctorum, in May.

Made up of members such as vocalist Gabisile Motuba, trombonist Malcolm Jiyane and others, Mogorosi refers to Project Elo as a collective trying to “challenge the idea of leaders and sidemen in jazz, which is very Eurocentric.” He says it’s not just himself and the band. “It’s a grouping of musicians, an ideology.”

For award-winning pianist Thandi Ntuli, it’s a welcomed coincidence that she was billed on the Moses Molelekwa stage during the anniversary month of the late pianist’s birth.

“When the festival organisers booked me, I was crossing fingers that they would choose that stage for me to play on, I'm a huge fan of his,” Ntuli tells Okayafrica. Born on 17 April 1973, the late Moses Taiwa Molelekwa composed and played bold music that celebrated South African sounds while at the same time defying traditional harmonies. In honor of Molelekwa’s rich musical legacy, the stage has exhibited a powerful lineup of youthful musicians in recent years who—similarly to Molelekwa—disregard genre archetypes to create a blend of their own sonic landscapes.

This weekend, Soshanguve-born Ntuli will take to the stage to play songs off her debut album, The Offering, which in 2015 received a Metro FM South African Music Award nomination and earned her the Mbokodo prize for 'Women in Jazz.’

Even though Ntuli has performed at the CTIJF before, it’s her first time performing with her band, which includes a list of esteemed jazz cats like Sisonke Xonti, Marcus Wyatt and Benjamin jephta.

One of the last acts slated to hit the stage this weekend, MuzArt epitomises the blend of traditional and experimental sounds that have come to define today’s jazz festivals. “Call the genre of our music what you want but we call it ‘nu-soul groove’. There’s elements of jazz, R&B and dance. We once were part of Soul Kandi records hence the house sound,” says vocalist and keyboardist Tshegofatso ‘Tazzy’ Lehutso, one third of the Johannesburg-based band.

Nominated in the “Best Newcomer” category at the South African Music Awards and Metro FM Awards in 2014, MuzArt is comprised of Lehutso, fellow keyboardist and backing vocalist Victory “Vic” Chauke and lead vocalist Rorisang Thandekiso, whose singing adds a youthful and commanding soul element to the outfit. “This is our first time performing and attending the jazz festival, so we will be focussing on playing our first album because we believe it’s such a large body of work,” Lehutso says.

MuzArt will be joined on stage by a full band, including a drummer, bassist, guitarist and Motswako rap star Khuli Chana.

A Public Debate In Remembrance Of The Late Great Jazz Player, Bheki Mseleku

“I wish I could play those big sounds,” the late piano player Bheki Mseleku once said, rather enviously, of musicians like Thelonious Monk, Abdullah Ibrahim and McCoy Turner. Unlike Mseleku, these musicians had lengthy fingers that stretched widely over their keys. And though he downplayed his musical abilities at the time, Mseleku, who passed away in 2008, is widely regarded as one of the most internationally revered musicians in jazz history. He downright moved on the keys and other instruments, creating music that continues to influence musicians decades after his untimely death at the age of 53.

In remembrance of the musician, who was born in KwaZulu-Natal and moved to London in the height of apartheid in the late 1970s, the jazz festival is holding a free discussion that will spotlight the glorious and tragic life and legacy of the composer and multi-instrumentalist. According to the CTIJF, “The debate will consider Mseleku’s music, his role in South African jazz history, and the questions surrounding his lack of success in South Africa, with the aim of promoting greater respect and better treatment for our musical greats while they still live, rather than lavish eulogies after their passing.”

As part of the annual Arts Journalism workshop at the CTIJF, the public debate will include South African music writer Percy Mabandu and flautist and composer Eddie Parker from the UK, who played with Mseleku and featured on his 1991 album, Celebration.