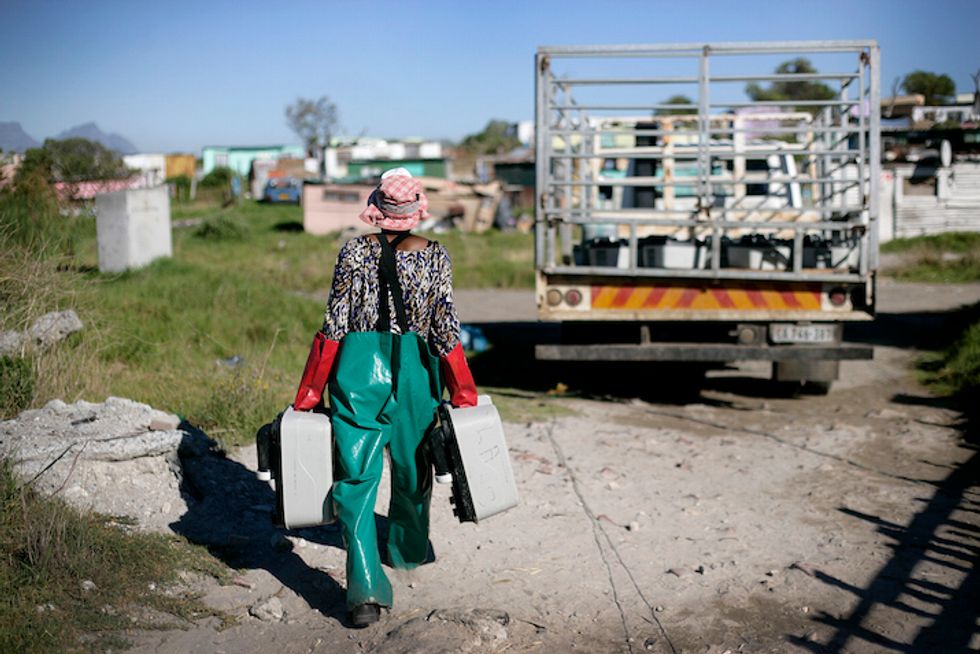 Cape Town-based photographer Masixole Feni is the latest recipient of the Ernest Cole Photographic Award for his project A Drain On Our Dignity – a series of images documenting the lack of proper sanitation facilities in Cape Town townships. The award, which is endorsed by the University of Cape Town, comes with a R150, 000 prize which funds photographers to complete an existing project, curate an exhibition and publish a book on their winning project.

On how the name of his project came about, Feni tells us, “When I submitted the project, I just had a simple name for it, Portar Potti – The Portable Toilet, but they called me and said ‘we are choosing you as a winner but we need a more meaningful name.’ Feni’s colleagues at GroundUp, where he is currently the staff photographer, suggested names. But it was former Cape Times editor, Alide Dasnois, who came up with the name A Drain On Our Dignity. Feni felt that was the name that described his photographs perfectly.

Completing the project, the photographer will be travelling to other provinces to document the sanitation issue. “Even though I started the project in Cape Town, it’s not just a Cape Town issue,” he says. “I will go to Limpopo where a school boy drowned in a pit toilet. I’ll also go to the Eastern Cape where service delivery is dead.”

Feni grew up in Mfuleni township, where, just like in all other black townships in Cape Town, lack of service delivery is rife. Sanitation has been one of the biggest challenges township residents face. For instance, in 2013, residents of Khayelitsha township dumped bags of human waste at the doorsteps of Parliament, still demanding better sanitation facilities than the portable toilets provided by the government. Feni started documenting the sanitation predicament circa 2002 while he was a stand-in photographer at Independent Newspapers. “Everytime I went out on a job, I had it at the back of my mind and looked out for any picture related to the sanitation issue,” he says. “It’s right in my face. I’ve always seen people from outside – outside journalists and foreigners, reporting on our issues. But it’s not always told in the right way.”

A Drain On Our Dignity explores the lack of proper sanitation in Cape Town’s townships from an insider’s perspective, from the lens of a man who has had to use a portable toilet himself. The series of photographs explores all the facets of the portable toilets, from the people who have to empty them to protests about service delivery.

Masixole grew up in an orphanage called Sakhumzi in Mfuleni. He was around 13-years-old when a group of photographers from the Icon Images School of Photography, led by award-winning photographer Garth Stead (who passed away in 2009), offered to give photography lessons to the residents of Sakhumzi. After about a year, the project came to a halt because, Feni says, the lady who ran the orphanage didn’t get along with Stead. A year after the project had stopped, Feni was expelled from the orphanage for being involved in a fight. He gave Stead a call and asked him to carry on teaching him photography- he agreed. Every weekend, around 2002, one of the photographers would take Feni and some of his friends along to any project or assignment. But that didn’t last very long. “It came to a point where they couldn’t facilitate the project anymore – when, say, they had to do projects in Jo’burg or even abroad for like three months. They then introduced us to their friends Iliso Labantu Photographic Collective – an NGO that facilitates township photographers.” From there, while still in high school, Feni worked as a stand-in photographer and freelancer for a few newspapers. He has since freelanced for the Cape Times, Cape Argus, The Big Issue and more. “I worked as a stand-in at Independent for a long time, and that’s how I got to take photography seriously,” he says. Before working as staff photographer for GroundUp, Feni contributed to Live Magazine SA, where he says he learned how to research and pitch his own stories.

The photographer is currently in the planning stages of the completion of his project with the aid of some of his colleagues and mentors.