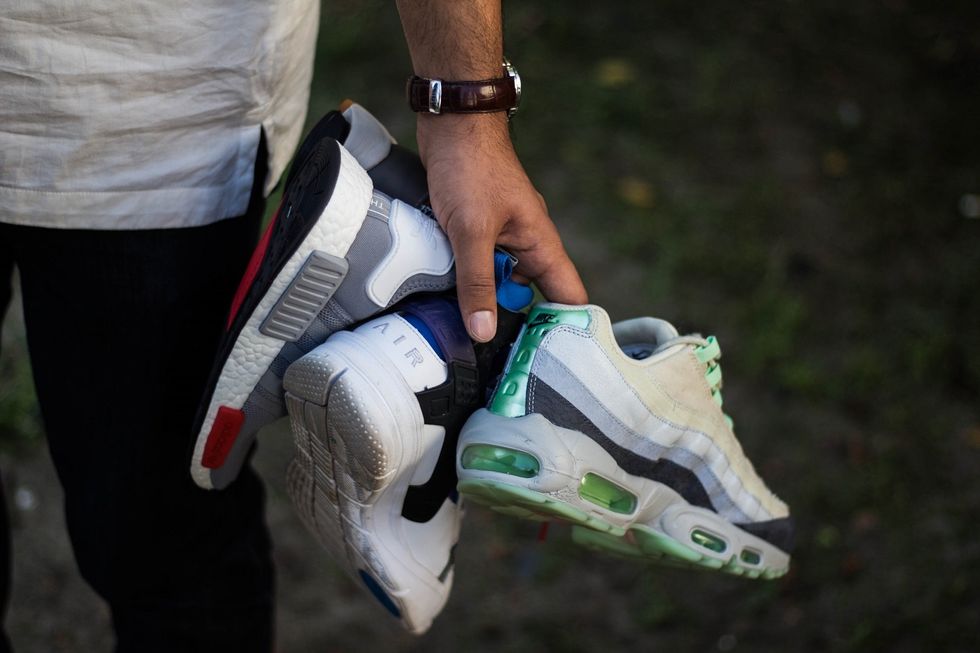 The film from Imraan Christian takes a hard look at Cape Town youth's obsession with "bubbles."

On the day a highly anticipated new release finally hits the shelf, a queue of sneakerheads snakes outside Shelflife in the Cape Town CBD. Shelflife is but one of many sneaker shops—Lost Property, Jack Lemkus etc.—in the city that service a large community of sneaker lovers, most of them from the city's coloured neighbourhoods.

To an outsider, sneakerheads are just vanity slaves and victims of consumerism. That's the immediate impression to their insatiable appetite for sneakers. A new documentary by renowned Cape Town filmmaker and photographer Imraan Christian reveals the politics behind Cape Town sneakerheads' love for sneakers. The documentary, which is titled Just Dala:Meet The Bubbleheads of Cape Town, is released by Highsnobiety.

"Like, you would say in Cape Town, in the Cape Coloured communities, people don't earn much. They live off the minimum," says Yaya Jeff, a member of the online sneaker store Unwanted Kicks, as he gets interviewed in Just Dala. "But when it comes to street swag and clothing lines, especially footwear, they would [rather] have less to eat and be wearing the most expensive kicks (sneakers). They put their all into it,"

According to Rolo Rozay, one of the country's well-known sneaker connoisseurs and co-founder of Sneaker Cartel, a popular sneaker shop on Long Street, bubbles (as sneakers with air bubble soles are known) are part of Cape Coloured culture.

"People say we're uncultured," says Rozay. "I'm like, 'Don't talk kak.' We got car culture, taxis, [and] we got fashion sense… I think bubble culture is big in the south: Wynberg, Grassy Park, but the bubbles just had that thing in Cape Town."

Some of the Cape Town sneaker scene's most notable names get interviewed and share their relationship with bubbles and what they mean for young Coloured people. Stashes of Nike boxes act as the backdrops for some of the subjects as they get interviewed in the documentary.

If you've been to Cape Town and challenged yourself to observe beyond Table Mountain and the city's tourist attractions, you might have noticed that, alongside Jordans, bubbles are a big thing to Coloured youth in the city—they are worn by anyone from gaartjies (taxi conductors) to school children and high profile personalities.

"Everyone needs to have a bubble. Newborn, old granny, grandpa," says Saeed "King Aitjie," founder of Unwanted Kicks, in response to Bliqees, "The Queen of Kicks," who states that her father used to get her pairs of bubbles.

She takes out a toddler-size bubble and says, "Kids are starting to camp out, waiting for toddler releases. One person sees you do it, and then the next person wanna do it, and it grows like that."

Popular Cape Town rapper YoungstaCPT's appearance in the documentary was a given. The artist has one of the most impressive sneaker collections in South Africa's hip-hop scene, specializing in classics—from retro Nike Air Jordans to staples like the Nike Air Max and the Nike Air Force One—as opposed to trending silhouettes like the ubiquitous dad sneakers.

In his music, YoungstaCPT has made enough references to sneakers to give you a clear picture of his taste even if you've never observed his kick game. Circa 2011, he released a song titled "Fresh Prince in Nike Airs." The song, which sampled the line, "Nikes on my feet keep my cypher complete," by Nas, details YoungstaCPT's love and obsession for sneakers. He raps about the different sneakers he has owned, from rare and exclusive gems to street standards:

"My sneakers, I can give you a full report/ I had to order these, you don't get them in usual stores/ Cortez was my first pair of Nike kicks/ I had the plain black suede with the white tick/ And after that, I got the white leather navy blue/ You can bet those there was my favorite shoe/ Now, I'm not saying that I only wear Nikes/ I like the Timberlands and my Jordan Air Flights/ But I couldn't buy those, I had to buy smarter."

His 2016 single, "Takkies," however dug deeper into the subject. In the song, the rapper uses sneakers as an entry point to issues faced by Cape Coloured people in the post-apartheid South Africa.

"When I was eight, I tried my first pair of Jordans on/ Asked my mom, 'Can we buy these? She said, 'Sorry son, I just can't afford'/ So I hustled the money 'cause I really wanted to own it/ The boys in the hood, they saw me with it, so they broke into my house and stole it."

He later adds in the song that after his sneakers got stolen, the police couldn't help him, highlighting the high crime rate in Coloured neighborhoods, specifically theft and murder, and police incompetence in the areas that need them most.

Another layer revealed in the song is the importance of looking great when you are poor. He raps, "Live in the hood with low finances/ All that matters is the clothing matches."

During his interview in the Just Dala documentary, YoungstaCPT echoes that very same sentiment.

He begins his response by emphasizing on the importance of one's physical appearance, adding that it tells one's story. "So when you do that, you automatically want to come out in the most flamboyant or the most extravagant or… you know, the best of the best," he says. "And most of the time, it was a Nike. That was the most expensive shoes that were in a store. All these traps that have been set up for us. Whether it's from the education department, whether it's from the housing department, or whatever the case may be, all those things have been set up in order for us to fail. And yet, we emerge from these places, dressed to the fucking T like the elite, and that's why I say it's a miracle."

Half of life, after all, is showing up. Why not show up looking like money, in a world where we are getting more comfortable with embracing our vanity? The rapper says that bubbles are worn with the knowledge "it would elevate us to a temporary status of that privileged success."

Sneaker heads can be found all over South Africa, but just like with many elements of street culture, for Capetonians, it's observed with far more vigor. One of the most successful recurring event series in South Africa is Sneaker Exchange, which was founded by Capetonian sneakerhead Zaid Osman. Sneaker Exchange is a sneaker convention where sneakerheads trade sneakers and discuss the goings on of the culture alongside performances from the country's top hip-hop artists—Shane Eagle, Reason, Riky Rick and YoungstaCPT have all been on the event's lineup.

Osman says during the documentary that the series of events manages to bring people from different walks of life under one roof to speak the same language—music, art and sneaker culture.

Fashion has proven to hold a deeper meaning for disenfranchised youth. For instance, the subculture of Johannesburg's izikhothane sees young people from the ghettos of Soweto take pride in their exorbitant clothes, shoes and accessories. They compete about whose outfit collectively costs the most in the ritual known as ukukhotha.

While the bubbleheads of Cape Town aren't as extremely competitive, the link is that young people who typically don't have thousands of rands at their disposal, still manage to wear clothes and shoes that break the bank. At least if you aren't feeling good about being poverty-stricken and can't afford land, the least you can do is wear something that makes you feel like you're on top of the world.

Watch Just Dala:Meet The Bubbleheads of Cape Town below:

Cape Town's Sneaker Culture is Unlike Anywhere Else in the Worldwww.youtube.com