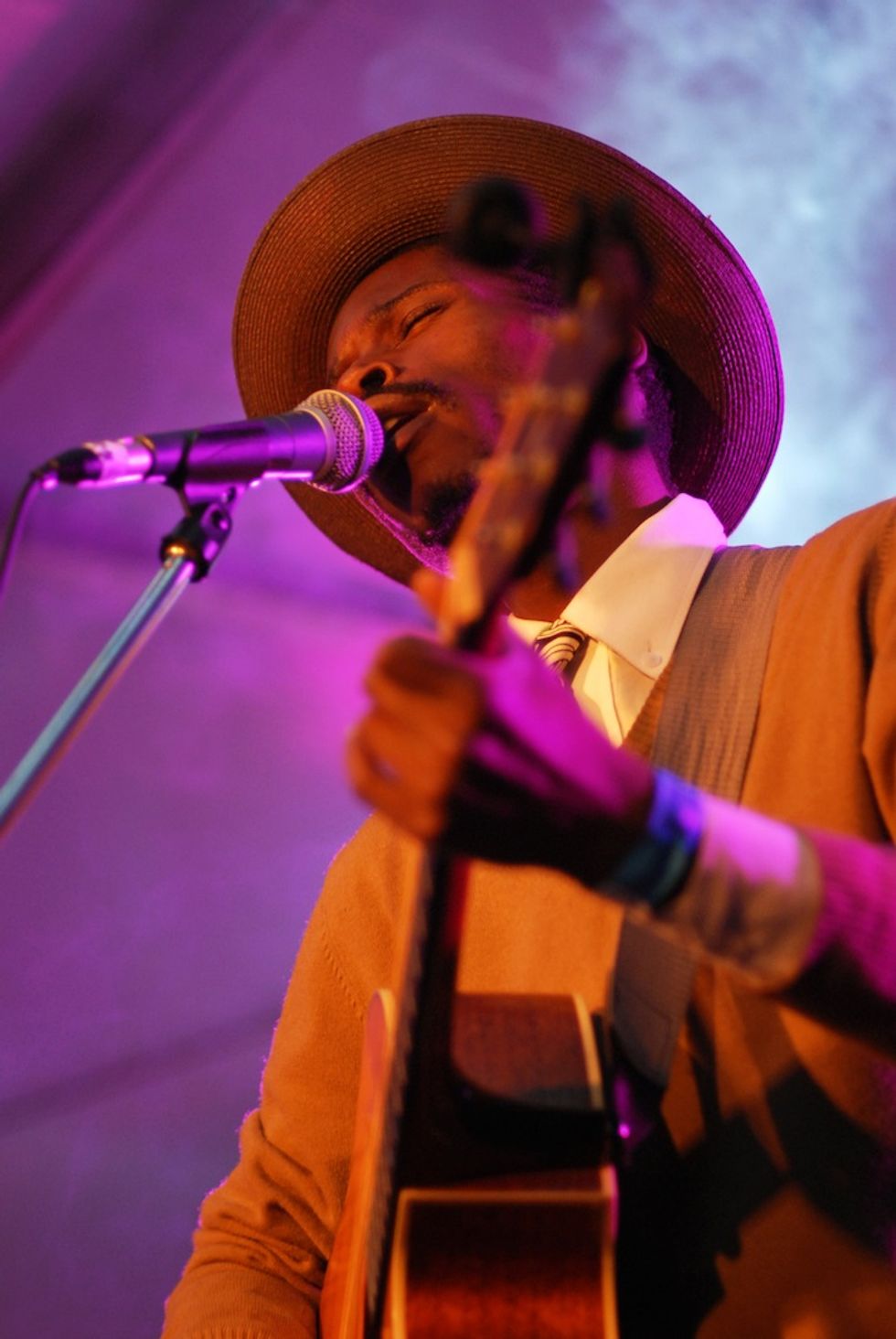 All photos by Kent Lingeveldt

Last week Okayafrica had a quick Q&A with South Africa's Thandiswa Mazwai and Mali's Vieux Farka Touré in the lead up to their performances for the second edition of the Cape Town World Music Festival. On one of the most maudlin-weathered weekends Cape Town has seen this season, expectations were far surpassed. Festival organisers Alain Ferrier and Maor Harris, along with Black Major’sItamar Weiss, set the bar even higher for Cape Town’s events scene. With the continent’s largest number of female performers on one roster, and a massively impressive setup, CTWMF was solidly curated with a minimal budget. The list of highlights is long, including Bongeziwe Mabandla and Vieux Farka Touré taking the stage and wowing the audience in tandem; Matthew Field of Beatenberg and his incredible falsetto; Madala Kunene's spellbinding set that left the audience dumbstruck; Cape Town’s own Pied Piper DJ Mighty and the unforgettable The Brother Moves On, who featured Zuko Collective lead vocalist and composer Nozuko “Zu Mapoma” -- someone Cape Town is still talking about as their prime feature. To end it all with a flourish, Thandiswa Mazwai and her female-laden stage dominated as the final act, with a cover of Skunk Anansie’s “Yes It’s Fucking Political.” Don’t take our word for it though; we’ve chatted to a handful of Cape Town’s creatives who were in attendance and asked them what they thought. Read on below and take a look at an exclusive photo set from Cape Town-based photographer Kent Lingeveldt in the gallery above.

“Well I am feeling very good, mostly because it's nice to feel that intention can become reality. I know we have a fortune of growth still to come, but we all feel like (considering the shoe string budget) we made it work. People were really kind to us, motivating and encouraging and that's all you could ever want -- a diverse audience who want to learn something new, and who dance their asses off in the process!”

“Aside from the acts I really enjoyed the "vibe", it was easy to get around from one stage to the other (the space was used impressively well from the food court to the bar and the seated stage on the roof top). It was awesome seeing Vieux live for the first time, I missed his gig in JHB  last year. That voice! Those fingers! Some nice surprises there. I was surprised to see Thandiswa playing with some members of her "all girl band," it was my first time seeing the ladies and I think it was a 1st for Cape Town too. I want to see more of them, they're “bad!” I actually think i strained a muscle during that performance or was it the night before during The Brother Moves On's act? That was also something else, they brought a female voice… this girl was something between Busi Mhlongo and Nosisi -- ex-lead vocalist of Kwani Experience. The funniest surprise was when they took off the suits they wore to reveal their trade mark leggings while playing. That was wild! The fest was awesome, from Madala Kunene to Carlo to Miss H. I really  got the sense that everyone was there purely for the music.”

“The Cape Town World Music Festival was an unusual experience of sounds from different places. What impressed me most was the rich variety and incredibly unparalleled local talent! The regal Thandiswa Mazwai, the legendary Madala Kunene, the electric Beatenberg & Dj Clockcombo, the kings & (queen) of thought-provocation from The Brother Moves On and Bongeziwe Mabandla's smooth ability to illicit an emotive reaction… It highlighted the immense talent available here on our own home-ground. It was an aural feast of note! I also really appreciated the diversity of age... I spoke and danced with people with different shades of grey atop their heads! The City Hall is my favourite venue in the city (I want to live in it), it was wonderful to see that building being used in such a dynamic way! Long way to go in terms of including different income groups but for a 2 year old festival I am well-impressed!”

“Thandsiwa Mazwai's performance was amazing. Her bassist was impressive too and I liked how they interacted with the crowd. I enjoyed her version of Skunk Anansie's song. I loved the acoustics in the venue and rate the performance as highly as I did when I witnessed her with Hugh Masekela at the Jazz Fest. Overall, I enjoyed the organization of the festival, for the price of both days I feel it was a bargain to get such quality acts in the same lineup. The turn-out was great and the energy was palpable in the crowds’ responses to Beatenberg’s rendition of Frank Ocean’s “Thinkin Bout You” and other dope songs like Thandiswa’s “Ngoma.”

"What a privilege to meet Madala Kunene… on Saturday night. He had good advice for the young ones. He said: 'Boy, take two hours with the guitar every day... keep in touch with it. And stay away from effects. Effects is the robber -- play straight.' The performances were astounding, each and every one."