Watch their debut music video for "Selula" about saving someone from cellphone addiction by reprogramming their mind.

In just a few short months, with just a prayer in their pockets, Darkie Fiction was born out of vocalist Yoza Mnyanda and rapper Katt Daddy's move to Johannesburg from Cape Town in search of an opportunity that would change their lives.

The two sat with producer Jakinda (one half of Qho-storyteller duo Stiff Pap) who managed to create a stimulating sound in "Selula," their first ever creation together.

It was indeed the start of something special. That day, the two decided that they needed enticing visuals to represent them, so former classmates and friends Laura Ritchie and Giorgi Young came to their aid. Spending literally their last R150, the duo set the scene for what was to be their debut.

Filling themselves with joy (and a bit of dry production design chicken) for supper that night, the two made the decision to come back to Cape Town to shoot their first music video with Spilt Juice—the only company kind enough to bless them with a gratis production. Spending that night on a mattress on the floor, the two hustlers reached out to us with their shoestring video in tow, and the story of Darkie Fiction continues with their latest accomplishment below.

We sat down with Yoza and Katt Daddy to find out what lies ahead for these ambitious alchemists.

Every story has to have a beginning, a middle and an end. Let's start with your beginning. How did Darkie Fiction come to be?

We both had solo careers when we met in 2016. The formation of Darkie Fiction kind of started as a "what if?" In mid 2017 we decided that we should try to do a song together as a duo and see if it worked out. It worked out.

Why the name? Are we wrong to assume you're alluding to telling stories through an African lens?

The name happened by chance, then we grew into it. Jakinda, the producer of Selula, said "doccie fiction" as in "documentary fiction." We took Darkie Fiction from that, liked the sound of it and what it had the potential to represent. A few weeks later, when we were looking for a name for the duo, Darkie Fiction came back to us. We realised that it was perfect for us and that it spoke to our frustrations with the music industry and what we wanted to bring to it. So the answer is yes, it is alluding to telling stories through a (South) African lens.

Tell us a bit more about the characters you portray and the people you are in daily life… Why have you cast these characters, and what do your IRL selves teach and learn through them, considering said frustrations with the industry?

Much like the name, the characters came through making the music. It's who we find ourselves being when we make music together. We both believe in and grew up on the same things. Kwaito, afro-funk, hip-hop, house and jazz were the soundtracks to our lives as children. We miss those sounds in contemporary South Africa. We're tired of listening to the same song by different artists. Popular South African music just sounds like American music and our frustration with that is what has become the characters you see in Darkie Fiction. They're not too removed from who we really are, unlike us though, they're just not afraid to say what they really think through music.

What stories did you tell yourselves about this journey before you began and was the run of events anything close to what you imagined?

It's actually crazy! Everything we said we would do is exactly what we have done up until this point: Get some cool pictures taken, release a single, shoot a music video and work on an EP. We are very proud of ourselves. The journey has almost felt like a daze, everything is just falling into place. We're learning that if you put your all into something and keep the promises you make to yourself about it, it will work out. It's not always easy though... Sometimes you face challenges and you're like "let's just stop, it's still early" but manifestation, prayer and speaking things into being really works out. The reception from people of the music and what we are trying to do has exceeded our expectations. The opportunities that have come to us just because we are expressing ourselves are amazing. 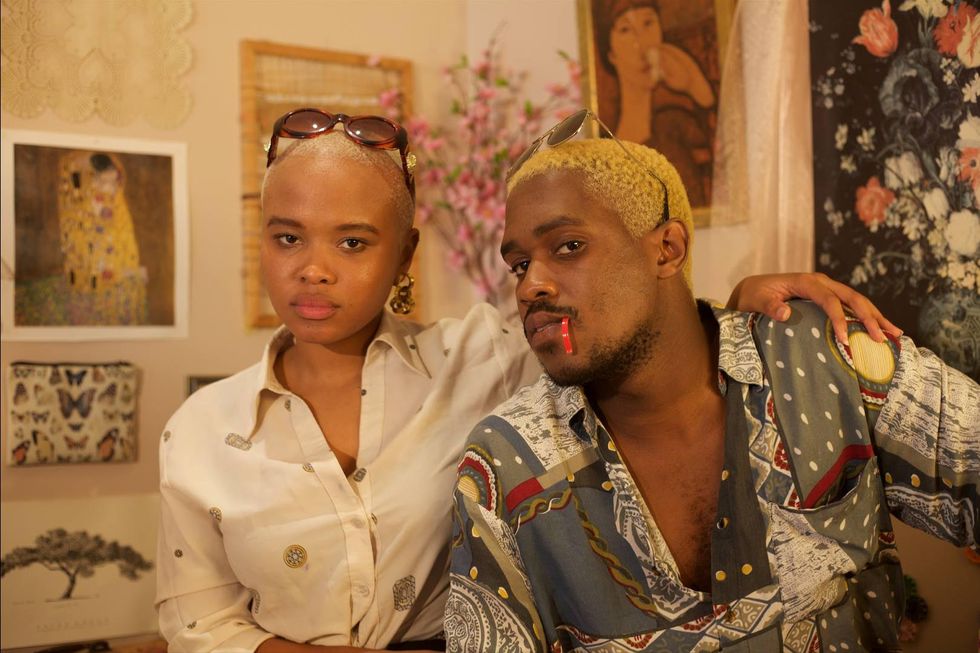 How did the "Selula" music video come about?

We had been thinking about it since we made the song but then we moved to Johannesburg and things had to go on hold. We then decided that we should go to Cape Town for a week and contact some of our friends that we knew would help us out. Our old room was still open, so we had a place to stay for free and we knew that we could count on some friends for some favours.

When we got to Cape Town, still without a clue of what the music video was about or how it would be done, we went to visit our friends from Spilt Juice (production company in Cape Town) and they agreed to help us out with the video. After a few days of conceptualising, R2000 and very helpful friends, we made a music video.

What we've learned from all this is that there is no excuse. If you want anything badly enough, you can make it happen. We also learned that being good to people and helping them out when they're in need means that they'll be good to you and help you out when you're in need too.

What was the idea behind the visuals?

The concept behind the video came about on the airplane en route to Cape Town. The video features two lovers walking in a park who come across a man consumed by his cellphone. They decide to go save him from his cellphone addiction and end up following him back home. They break into his house and reprogram his mind. In the video an ice cream lolly was used in place of a cell phone. The ice-cream lolly is a symbol of fun times, laughter, enjoying the moment, togetherness and being present, which excessive cellphone use takes away from people in today's modern world.

Considering this video, do you feel as if you are a part of a system that reprograms people's minds via the music you create?

100%. We're just trying to help (South) Africans, including ourselves, to realise that there's no need to gimmick the West. There is so much deep culture, art and music to draw inspiration from right here at home.

How would you like the Darkie Fiction story to end? What else can we expect from your upcoming releases?

Darkie Fiction should never end. We want to leave behind more than just music. We want to inspire a lot more Africans to make music and tell stories for and about Africa... art that authentically represents us and says we alone are good enough. We hope that people become more interested in the (South) African way and if we can contribute to that consciousness in even the smallest way then that's what we are going to do.

In terms of future plans, we are currently working on an EP, we have some really cool producers working with us and we are still looking for more. We have another single coming up that we are very excited about and we hope that people stay tuned and support us on our journey. We also hope to release some Darkie Fiction merchandise after the release of our EP and are currently working on more concepts for photo shoots… and hopefully one day when we are big, we will own and open up "Fiction Sound Studios" where African children can make African music.

When futuristic Namibian rap trio Black Vulcanite burst onto the southern African hip-hop scene in 2013, they brought with them an air of consciousness that had been missing for some time. Ever since Tumi's Once Upon a Time in Africa and Zubz's Get Out, SA hip-hop had been missing the unspoken truths we were all witnessing but could do little about. Black Vulcanite's Remember the Future, however, foreshadowed a rise in black consciousness throughout southern Africa. They've been relatively quiet since then, but with the rise of #FeesMustFall in South Africa, #ThisFlag in Zimbabwe and various other protest movements throughout the region, there’s perhaps no better time than now for the group’s return.

In the Lab with Cape Town's Beat Sampras

Nigerian-Australian rapper Remi tackles racism in Australia with his new music video for "Ode To Ignorance," off 'Raw X Infinity.'

Return of the King: Tumi Molekane Reflects On 10 Years In Hip-Hop

In the lead-up to his third studio album, 'Return of the King,' Tumi Molekane reflects on 10 years in hip-hop.