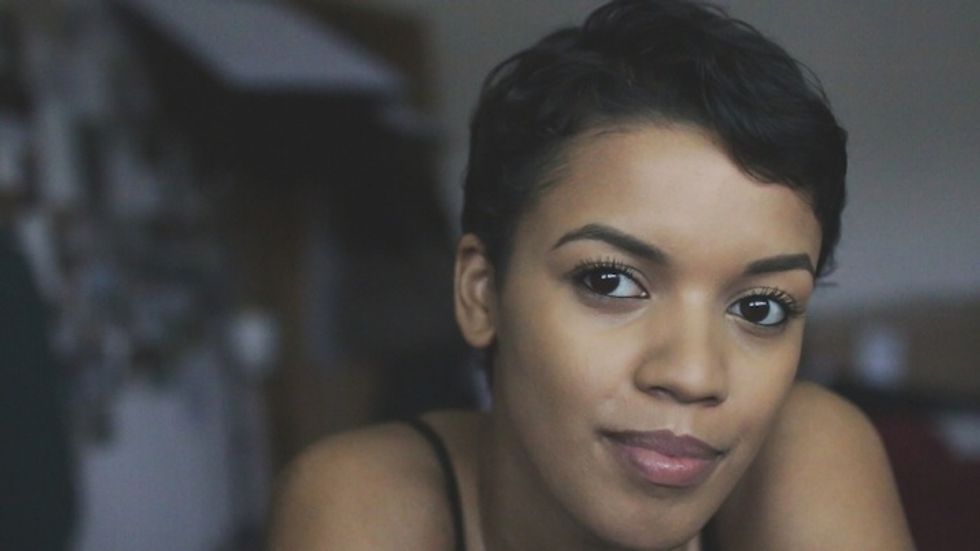 Cecile Emeke is a UK-based filmmaker, poet and multimedia artist whose video series Strolling and Ackee and Saltfish speak to experiences and concerns of British black youth. Emeke is especially interested in the stories of young women of the African diaspora, whose experiences rarely receive recognition in mainstream media and art. I first came across Emeke’s videos on Tumblr before I knew who she was, but being a woman, feminist and Black Canadian of Ghanaian descent, I felt an immediate sense of recognition in the experiences shared by her interviewees. Emeke’s work is nuanced and precise, and oftentimes explores themes of Black identity and representation that is strongly influenced by Black feminist thought. Needless to say, I was curious to find out more about the person behind the camera...

Adwoa Affu for Okayafrica: How would you describe yourself and what you do? How did you get started?

Cecile Emeke: I would describe myself as an artist. Right now I am primarily working with film. I've always been very creative but I got started with film earlier this year when I wanted to release a poem as a film, as opposed to just audio on soundcloud or text on tumblr, for example. I got a taste for film and I've never stopped.

OKA: Authenticity is a theme that runs through much of your work, and your poems like "Origin" and "Carefully Coiffed," for instance, suggest that that concept can be a loaded notion and one fraught with tension for Black Britons and people across the diaspora.

Emeke: I try to be honest in my work and I think honesty is what allows nuances of humanity to shine through. I stay true to myself and my truth, bringing another story and voice to the table, and therefore helping to break single story dogma, as opposed to trying to mold myself to what I think people want to see or hear.

OKA: Much of your work deals with feeling invisible or being erased, especially in places like Europe that ignore the history of Blacks within their borders. But do you think there may be some political value or potential in creating a politics rooted in being invisible or stateless?

Emeke: I don't believe in binaries or restrictive categories for being. Binaries of race, sexuality, class and so on and so forth are all human constructions. I do not think any human construction is able to fully encompass natural variation. So I think a stateless politics in that there are no restrictive labels and binaries, and that all human variation can exist freely is extremely beneficial in the long term or in a utopia.

However, I think in our current society, to advocate "stateless" politics is to advocate a set of beliefs that are inevitably in favour of CIS heteronotmativity, ableism, whiteness, patriarchy, capitalism, imperialism and all of the other systems that our society are governed by invisibly. When we ask people who are oppressed by these systems to advocate "stateless" politics, we inevitably ask them to "speak all things to all people and speak everyone else's position but our [their] own", as Audre Lorde said. To create space that combats erasure is a reaction to the deliberate act of erasure. I think we should focus our energy on critiquing and dismantling systems that are acting out the abuse, not on those who are reacting to it.

OKA: You have mentioned in other interviews that you feel that the talents of Black creatives in Britain are not being recognized in all their fullness, and you argue that that is because Black artists are not allowed the space to fully realize their talents in the UK. As a young creative, what do you think would need to be done in order to create those spaces, and how can that come about without putting that burden largely on the backs of Black artists?

Emeke: I think the fact you have to ask me this question is extremely telling. You are having to act the victim of a problem what the solution is, because we all know those responsible for making things the way the are, are not held accountable for their actions. We know "they" won't do anything so we are left to ask each other "what shall we do?" That says it all for me. I think the lack of space and support for black artists in the UK is just one symptom of a much bigger and gigantic problem. There is a systemic and institutional problem at the foundation of British society and until there is a huge upheaval and change at the very core of society then we are left trying to dismantle the masters house with the masters tools. And we already know that doesn't bring a lasting or adequate change.

OKA: You have said that it is important to you to help fight the myth that today’s Black youth are disinterested in politics. How do you see participating or creating web series like Strolling as innovating on more traditional forms of political engagement?

Emeke: I'm not particularly concerned with encouraging young people to participate in traditional forms of political engagement which ultimately is comprised of several repackaged versions of the same elitist, unrepresentative groups. I'm more concerned with encouraging people to think critically about everything, including the current political system and whether or not it is serving its purpose, and alternatives systems. The advantage of addressing issues through voices of ordinary people is that it is actually relevant. I think it is odd to blindly listen to and trust those with money, resources and power that we can't imagine to act in our interest, when the oppression of us all is exactly what sustains their position. Strolling takes control back of our narrative and has our best interest at heart.

OKA: I love that both “Strolling” and “Ackee and Salt Fish,” are focused on creating creative platforms in which black women can talk honestly about their experiences and concerns. Despite decades of Black women and feminists advocating for the same for decades, in 2014 the voices of Black women in the media or other creative realms are still hard to come by. Why do you think that still is?

Emeke: Again I think this is a symptom of a much bigger problem; one both imposed on society and one that has also been internalized by many of us for survival.

OKA: You have said that you do not intentionally frame your work around “blackness and womanhood” per se, but that you are merely responding to them. Would you mind explaining what you mean by that?

Emeke: So I was part of a panel at a talk recently, comprised of all black women, and we were all asked if we identify as black feminists. To my surprise I was the only one who did, though everyone seemed to identify with black feminist/womanist thought but they wanted to distance themselves from that term specifically for various reasons. Despite many of them having various valid reasons, it seemed to come across to onlookers as not wanting to call it what it is and shying away from the very directness of the term "Black Feminism," even though that probably isn't why they said what they said. In hindsight I can see why maybe my above remark may possibly be interpreted as a similar "cop-out" or "petty" distinction. But it's the opposite. I am very intentional in everything I do. So I would probably rephrase my answer if I were asked that again.

The question I was asked was "do you intentionally center your work on blackness and womanhood" and of course as a black woman my answer is "well I'm a black woman, so of course I'm going to talk about people like me in my work, how can I not?". And that was kind of what I was saying. But in the context of the anti-black, patriarchal society we live in where we are constantly asked to center people other than ourselves, the question was really asking "in a world where whiteness and masculinity are default, and all creatives are pressured to make creative work that has this white, patriarchal gaze in mind, do you intentionally center your work on blackness and womanhood or did you not get the memo?" And to say no to that latter question is to almost shy away from wanting to be direct about what I'm doing which is not me at all. I'm very direct. So I would change my answer to that question I was asked in a previous interview and say that yes, I'm just merely responding to my reality, but I am 100% intentional in that decision to center my reality, and reject the notion that I should speak all things for all people other than myself, and so yes I am intentionally focusing on blackness and womanhood in my work.

OKA: You have talked about how Angela Davis and Audre Lorde are two of your biggest influences, even dedicating your poem “Eaten Alive” to Lorde. But you also have discussed how important it is for you to help create a platform to young Black Briton’s to express themselves without having to latch on to an American or Caribbean of African identity, and Lorde and Davis works are based on their experiences of being Black women in the United States. How do you create work that speaks to the unique experience of being a Black European or British woman while at the same time underlining some of the commonalities of those experiences between Blacks across the Diaspora?

Emeke: I think people of the African diaspora of course have similarities in their experiences because of the global systems governing our reality, but of course there are also differences. I think its great to learn what others before you in similar situations have done, even if they weren't in the exact circumstances. I think people like Audre Lorde or Angela Davis have stayed true to their truth in their work, and much of it happens to resonate with me. Similarly I think if I continue to create work true to me, perhaps it will resonate with others.

OKA: You have talked about how when you were younger, that you thought it was your responsibility to change yourself in order to make others feel more comfortable with who you are. Your poems, like “Origin” and your films, for me, because of their bluntness and honesty achieve the opposite effect. Was that effect something you sought to do?

Emeke: I just aim for honesty in my work, perhaps that makes people uncomfortable. Perhaps that is politically useful for people to self-reflect on why honesty makes them uncomfortable and why our society encourages pretence.

OKA: Many of your poems, especially your recorded pieces, like “Legato,” “Real Recognise,” and “Casually Coiffed,” are set to beats and produced like pieces of music. How important or influential is music when coming up with a spoken word piece?

Emeke: Music is something I love and it really influences me. I think music can move and influence people in unspeakable ways that defies our own understanding.

OKA: In a recent post for Afropunk, you spoke candidly about how part of your goal for “Strolling” is to show that you do not need a degree in cultural studies to have nuanced and politically charged opinions about what’s happening on societal level and how that relates to individual experiences. How do the arts help fill in the gaps or outdo academia in this regard?

Adwoa Afful is a Ghanaian-Canadian fashion and culture blogger based in Toronto, who writes about fashion from a feminist perspective. You can follow her at her blog The Style Idle.