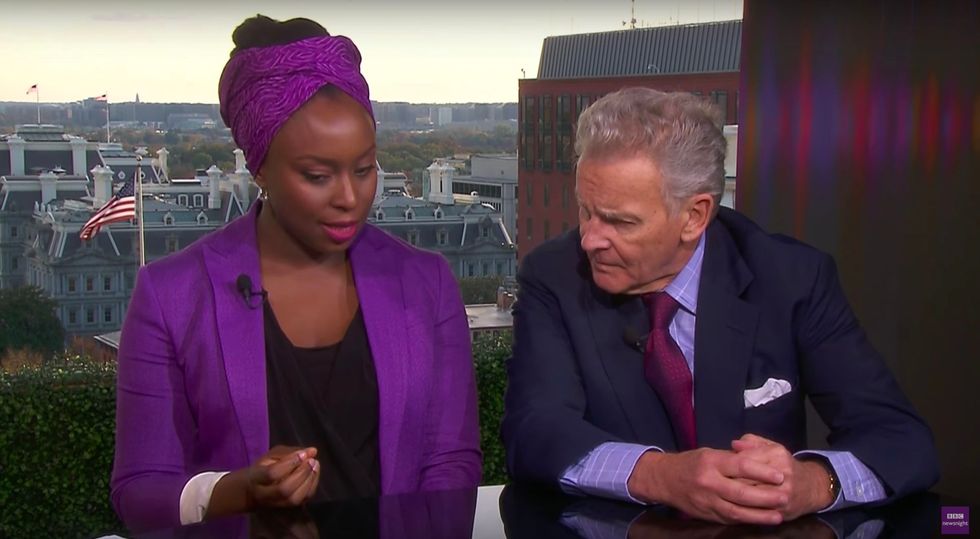 Prolific Nigerian novelist and renowned feminist Chimamanda Ngozi Adichie appeared on BBC Newsnight alongside noted conservative asshole R. Emmett Tyrrell (who we'll refer to as "Bob") shortly after the election of you know.

BBC commentator Emily Maitlis began by noting the first-ever black President will be followed by someone who’s been endorsed by the KKK (which is a fact), to which Bob laughed, and to which Adichie could only look on in horror (at Bob, for his assholeness).

Bob elaborated that the KKK doesn’t mean anything. “I can’t imagine anybody more marginal to American elections than the KKK…”

But we’ll let Adichie take it from here.

“The point is, the KKK exists. The KKK endorsed Donald Trump. The KKK stands for white supremacy. And that has to be acknowledged. That has to be pushed back on,” a stunned Adichie responded.

Maitlis pointed out that if a fifth of Latino and Hispanic voters went with Trump, maybe race wasn’t an issue after all. Adichie, thank goodness, took issue with that line of thought. “I find that argument to be very troubling—the idea somehow that if Hispanic or even any people of color work for someone who’s racist it means he’s not racist. Every system of oppression has people who are in the group of the oppressed who somehow contribute to that oppression,” she said.

“I think what we should do is look at Trump for who Trump has told us and shown us that he is. So let’s look at what he has said on the campaign trail. The only way we can judge the kind of president he will be is based on the campaign that he ran.”

But what if Trump didn’t believe anything he said, Maitlis wondered. That’s exactly the problem, Adichie said. “On the one hand we’re told that Trump’s appeal is that he says what he thinks and he says it like it is, and then on the other hand we’re told that he doesn’t really mean it. So which is it? There’s something very troubling about that.”

The discussion then turned to whether or not Trump has been racist in his language (he has). Bob, of course, flat-out denied Trump's racism. Adichie was all smiles in her response. “If you’re a white man, you don’t get to define what racism is. You don’t get to sit there and say that he hasn’t been racist, when objectively he has. And it’s not about your opinion. There are objective things, racism is an objective reality, and Donald Trump has inhabited that reality.”

Bob called false consciousness on Adichie. “I can’t even open my mouth because I’m a white male…”

Adichie shouldn’t have had to respond to Bob. But she did. “I’m just saying to you that Donald Trump has shown us and has said things that are objectively racist… If he says to us, for example, that a United States judge is unable to judge him fairly because he’s Mexican, that is racist. Objectively racist.”

As for final thoughts: will Trump govern in the same way that he campaigned? Bob said no, that he showed people how he’ll govern starting the other night when he was “dignified, charming and very focused.”

“I think it’s very sad that the standards have been so lowered for Donald Trump that because he manages not to behave like a spoiled child, he needs to be praised," commented Adichie. "To say to us that we have to disregard everything that Donald Trump said and did during his long campaign and judge him just on the one day after he had won the election doesn’t make sense.”

Chimamanda Adichie's patience here is amazing and the eye roll at 0:29 is lethal https://t.co/jYWqdwQPYo

Chimamanda Ngozi Adichie was NOT having it with YT today! She's always speaking straight truth ???? pic.twitter.com/qkH2WaxIew

Chimamanda Ngozi Adichie shading this white dude who's claiming Trump's not racist is all of us right now. pic.twitter.com/eFvFIMk8XL