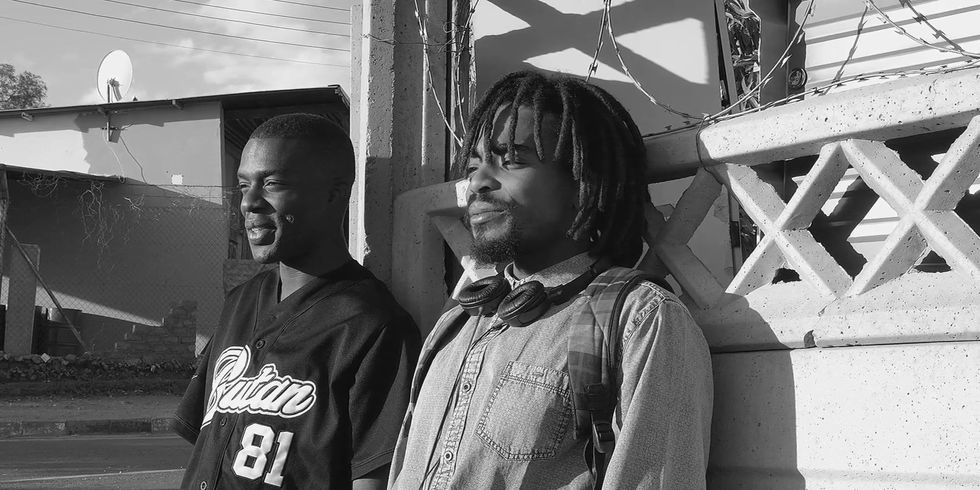 Perivi Katjavivi’s feature film debut is a collection of philosophical musings on what it means to be alive in post-colonial Namibia.

In the tenth instalment of Cinema Africa, Alyssa Klein sits down with Namibian filmmaker Perivi Katjavivi following the South Africa debut of his feature debut, The Unseen, at the 37th Durban International Film Festival.

Perivi Katjavivi’s deeply poetic feature film debut is a collection of philosophical musings on what it means to be alive in post-colonial Namibia. Shot in stark black and white and weaving stylistically between fiction and documentary, The Unseen tells the parallel stories of three lost souls in Windhoek––a Namibian rapper (Matthew Ishitile), an African-American actor (Antonio David Lyons) and a young depressed woman (Senga Brockerhoff) who has recently returned home from a life overseas. The characters never actually cross paths. Rather, they’re tied together thematically by a sense of isolation from the rest of Namibian society.

The Unseen had its world premiere in February at the Pan African Film Festival in Los Angeles. Last month, the film made its South Africa debut in competition at the 37th Durban International Film Festival. I caught up with Katjavivi in Joburg shortly after DIFF.

Alyssa Klein for Okayafrica: Tell us about The Unseen...

Perivi Katjavivi: It’s a film that unfolds more like an essay than a straight narrative. It’s a film that looks at issues of identity and place in contemporary Namibia and follows three stories that are all interconnected thematically. That of a young depressed woman who’s traveled and seen the world and is returned home and deeply unfulfilled, deeply unsatisfied with life and her place in it. There’s an African-American actor who travels to Namibia to play the role of Mandume Ya Ndemufayo, a famous historical leader in a Namibian film. He then deals with issues of place and identity. He's certainly someone who’s searching for something greater and something more meaningful as he starts this journey to hopefully make this film. And a struggling rapper who finds himself caught in between cultures and influences, and is trying to navigate the influences of his community versus the influence of western culture and hip-hop. He’s trying to find his own unique voice.

I’m more interested in linking them thematically, as opposed to having people pop in and out of each other’s stories a la Crash, or those sorts of multi-narrative films. They’re linked by the fact that they’re all doing something that I get the impression we’re doing more of in southern Africa––we’re asking questions about what it means to be African in contemporary Africa. And these are three people that are certainly wrestling with those questions, of which we have yet to find answers. There are no answers yet as far as we’re concerned.

What are some major themes throughout the film?

We’re exploring postcolonial identity, culture, music, language. Language becomes a big thing for me in a portion of the film. Can you think in your own language? Do you think in your own language? Do you think in English? How does that affect you? Why would you communicate in this language? Why would you make music in this specific language? These are things that we take for granted. One of the biggest mistakes we make as Africans is that when you want to have this conversation, a lot of people are dismissive. They say, “well, I don’t have to be African. I don’t have to have that conversation. I’m just doing what I want to do.” But to do what you want to do, you’re picking a side, you’re making a choice in that already. In the sense that the culture we have is not an African culture, it’s a generic culture, it’s a Eurocentric culture that we have the world over. So to not engage in the conversation, or to say, “I’m just doing whatever, I don’t need to consciously be African, or consciously address these things,” you are actually making a decision by doing that. That was something that came across very strongly in the movie.

And just feeling this notion of in-betweenness. The movie is called The Unseen for different reasons, and I hate to over-explain things, but there’s certainly unseen spaces. There are people who lack visibility in the world. And [the three main characters] are an example of three people that are invisible, and existing in this unseen space that you can’t define. It’s not colonial or decolonial. It’s not African or Western. It’s not black or white. It’s something else. And I think more and more of us can relate to that sense of displacement and in-betweenness.

Can you speak at all on having an American as one of your main characters?

Following an American actor in Namibia [gave us] a specific vantage point. It takes foreigners sometimes to come to our communities to show us how crazy we are. There are many things that we tolerate every day in Namibia. Namibia is an incredibly racist place. It has an incredible amount of income inequality. But for most people those things are normal. People do not address those things. Somebody else comes in and goes, “you know, this is kind of crazy. You guys live like this?” That has value.

Could you tell us a little more about yourself and how your own background might have shaped the film?

I’m a Namibian, a Namibian filmmaker. I’ve lived there almost my whole life. My father’s from there. My mother’s from England. I was born in England so I do have that dual heritage. And that in itself, that’s a way I relate to this more fluid exploration of identity and place. I can also look at myself and think, well, “Is he African enough? Is he European enough?” I’m very comfortable in my skin, I’m very comfortable as a Namibian. But I’m very clear that I don’t fit the main narrative. I don’t fit the easy kind of well, that’s “what an African looks like.” Or that’s “what a Namibian looks like,” or “how they should behave.” I’m very open to self-examination and being part of this conversation about who we are, where we’re from, where we’re going to.

And your filmmaking background?

I wanted to make films, probably, since I was eight years old. I went to a small film school in Los Angeles called Columbia College. I did my masters at UCT more recently. I’ve been running a company called Old Location Films in Namibia. Historically, Old Location was kind of like how Sophiatown was to Joburg or the Harlem Renaissance in the States. Old Location was a neighbourhood in Windhoek in the 50s where you had all these different cultures and influences from around the country. This was not before apartheid, but before some of the forced removals. Then in the 50s people were forcefully removed, massacred. The intention in naming my company is to recall that spirit. We intended on making films for Africans, and the world. People keep saying, “well, we make content for the global market,” or “we make African content for the world.” What does that mean? It’s already problematic because you’re not interested in your local audience. So I’m interested in making films about issues of identity and some of the things we’ve touched on. For us, by us, and for everybody else too.

What can you tell us about the film scene in Namibia?

Namibia is very small. Namibia has two million people. So we’re not in a position to work towards building a film industry. There have been a number of filmmakers that have been making really exciting stuff since the 90s. Some of that gets seen beyond the border, some of it doesn’t. I think it’s an interesting time now. Because it’s much easier to make a film. It was very hard to get our film done, but it was a film we did for next to nothing. It’s always a model I encourage. Some of my heroes were people like John Cassavetes––pick up a camera and make a movie. I’m always interested in what is the space that you’re making your film from. How are you seeing the world and working creatively from there? The way filmmaking has been imposed on us in southern Africa, we're copying and pasting another model and putting it on us. That in itself is suffocating the progression of original voices. And I think Namibia is no different in that sense. Education, our education systems are incredibly poor in Namibia and South Africa as well. It’s not just about film education, it’s about life education. If those things aren’t there, you’re not going to change things fundamentally because you’re not addressing the larger holistic education needs. That’s my biggest issue. And it’s one of the reasons I’m getting more involved in academia.

We have a film commission, which for a tiny country of two million people to have a film commission is pretty dope. They started off doing amazing things, but we have two individuals that basically hijacked the good efforts of the commission and have just been using it as their cash cow. And unfortunately nobody does anything. That’s also part of another culture of entitlement and corruption that we also have here in South Africa. So again, you can fix the film commission, but if you don’t fix the country, it doesn’t really help. Not to be deeply pessimistic. But there are amazing filmmakers. There are people like Joel Haikali, Richard Pakleppa, Tim Huebschle, Pedro Mendoza. There are many people I can name who have been doing interesting work that I hope gets acknowledged more and more.

What’s your take on youth culture in Windhoek?

We have crazy rates of alcohol consumption. It’s a serious problem. I think in a city like Windhoek there really is nothing to do for a lot of young people. There really isn’t shit going on. And crazy unemployment rates as well. You take those factors, coupled with not enough going on for kids, and you just have a very unhealthy situation. But it’s important to note that people are still doing really cool shit. People are still creating great music. People are making films more and more in Namibia. There’s very popular monthly poetry sessions. I think you’d find youth culture is very similar in southern Africa, but you’d not surprisingly find more stuff going on in the centres.

The Unseen will have its next public screening in Windhoek on the 24th of August. The event is being organised by AfricAvenir as part of their on going African Perspective series. The event looks to challenge old colonial narratives as it is scheduled to take place at the Alte Feste, an old German fort that looks out at the surrounding Namibian capital.