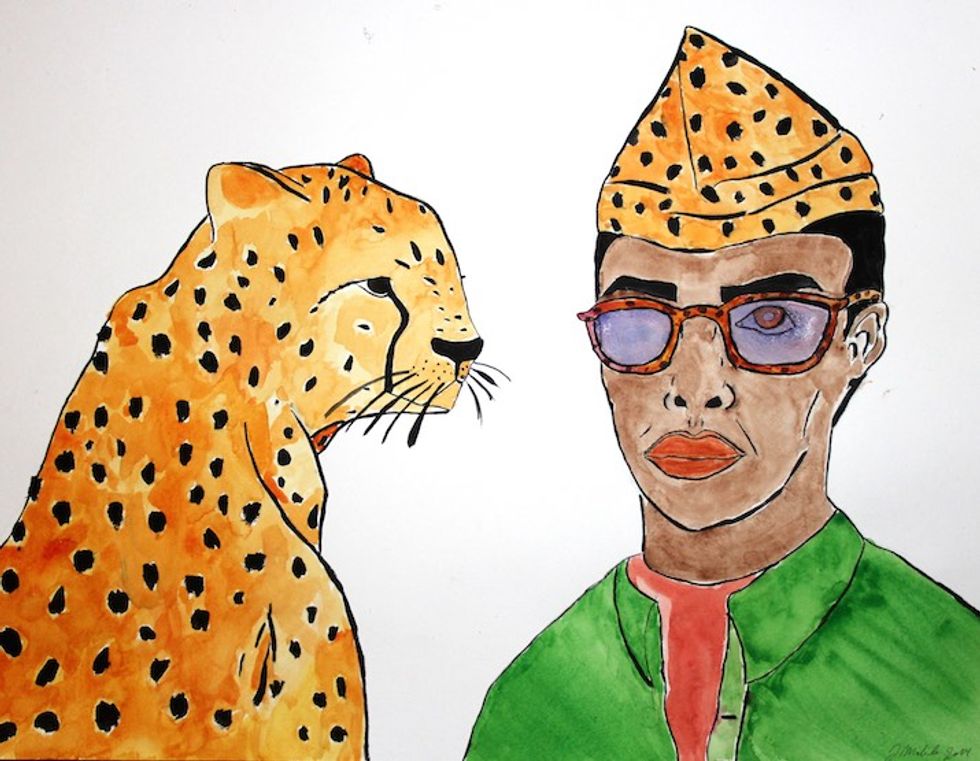 Jonathan Mwe di Malila is a twenty-one-year-old oil and acrylic painter who says his latest work serves to uplift his heritage and bring Congolese culture to the mainstream. The Kinshasa-born artist moved to Cologne, Germany, at a young age. Faced with the unfamiliarity of his new surroundings, he turned to art as a means of connecting with those around him. "I remembered very well that communication was really difficult to me because I couldn't speak a single word in German," he told us over e-mail. "So to let people know what I wanted to communicate I started drawing little pictures and paintings. By the time I learned German, my passion for art hadn't slackened for a single moment."

Malila's vibrant paintings take elements of Pop Art's vivid collaging and Fauvism's bold brushstrokes and color palettes to create a technicolor mixed-media style he's dubbed CONGO POP. "Congo Pop is the lovechild between Pop-Art and Fauvism," he explained. "In my paintings I depict everyday Congolese culture in a colorful and expressive tone and I use my African background, combined with everyday objects, subjects and situations to bring funny content and culture to people. Sometimes, some of my work appears to be naive. These works partially depict childish and elementary visions and act as spontaneous expressions of myself."

It is this uninhibited freedom of expression that inspired Malila to focus his recent series Les Gens de coleur de Kinsasha on the dapper Gentlemen of Bacongo, a fraternity of well-dressed men whose self-determining ideology manifests itself through their expertly tailored outfits and air of genteel individuality. Les Sapeurs, as they are called in Congo, use their impeccable fashion sense and elegant affectations to transform themselves into walking works of art. Despite their often humble beginnings, Sapeurs adopt lavish personas in order to resist being confined to their socioeconomic standing, and their outward appearance tells the world that they too can possess the swagger and status of well-heeled members of the upper class. "The urge for freedom and the desire for individuality are the subjects of these paintings," he told us of the series. "In particular, the self-presentation [of Sapeurs] considering the external circumstances impressed me."

Another new series focuses solely on female figures, and features oil portraits of four different women. Malila shared that he started working on this collection, titled Black Beauty, to show the beauty of the African woman. In both Black Beauty and Les Gens de coleur de Kinshasa, Malila uses a solid color palette made up of bright and flashy hues, with simplified forms that integrate patterned African fabrics.

Click through the gallery above for more of Jonathan Mwe di Malila's CONGO POP, and keep up with him on Facebook and Tumblr.