Cuba And Ebola: Cubans Have Always Been Willing To Lay Down Their Lives For Africa (When Asked) –By Prexy Nesbitt 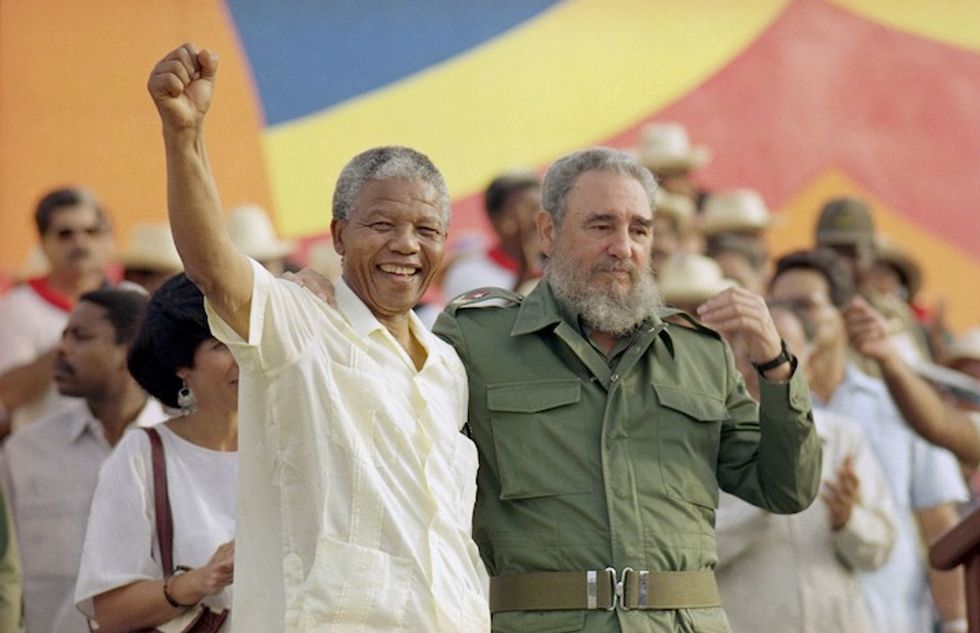 Cuba And Ebola: Cubans Have Always Been Willing To Lay Down Their Lives For Africa (When Asked) –By Prexy Nesbitt

In 1975 I was part of a delegation that went to Cuba to meet with members of both the Cuban government and representatives of the Popular Movement for the Liberation of Angola (MPLA). The purpose of our trip was to learn about the assistance that the Cuban government was affording Angola, helping them militarily defend the newly established Angolan Republic from South African apartheid forces along with their allied entities like the U.S., Morocco, Mobutu’s Congo, and various Angolan opposition candidates financed by the CIA. For the remainder of 1975 into 1976, we protested the U.S. role in Angola; in late 1976 the U.S. Congress banned further U.S. covert activities in Angola via the Tunney and Clark Amendments.

During the 1975 trip we visited various parts of Cuba. While playing basketball with some local young people in a housing cooperative outside Havana, I made friends with an eight-year-old blond, blue-eyed Cuban girl with a great hook shot. She had on a t-shirt that referred to Angola and the struggle there. I asked where she had obtained it. She responded that her brother was in the army in Angola. I asked if she missed him, given how far away Angola is from Cuba. She said to me something I have never forgotten: “We are in Angola because we are an African people.”

An October 19, 2014 opinion piece written by the New York Times Editorial Board said that the hundreds of Cuban volunteers deployed to West Africa to fight the Ebola threat were being sent "at least, in part, to bolster its [Cuba’s] beleaguered international standing."

While members of the mainstream U.S. press are finally giving some positive coverage to Cuba, we should not fail to appreciate the notable ignorance that most U.S. press stories still promote regarding Cuba’s historic engagement with Africa.

Today, more than 50,000 Cuban doctors are working in 66 countries worldwide, mostly in Africa. Nearly the same number of Africans have graduated from universities and training programs in Cuba, often financed by the Cuban government.

Overall, as Cuban scholar David Gonzalez Lopez has repeatedly noted, "almost half a million Cubans have lived in Africa for extended periods, in civilian or military missions of cooperation, over the past five decades."

Cuba sent health experts and then teachers to work in the Republic of Guinea as early as 1960. The first brigades of Cuban volunteers from various fields were dispatched from Havana to various African countries ranging from Mali and Algeria to Congo (Brazzaville) and Tanzania in the mid-sixties. In 1965, I recall going to a seminar at the Patrice Lumumba Adult Education Institute in Dar Es Salaam to hear Che Guevara speak on Congo’s post-independence struggle. (He had been invited to speak there by my professor of political science at the University College of Dar Es Salaam, Irene Brown. Knowing my enthusiasm for liberation movements, Irene extended me a special invitation as well.)

Che Guevera in disguise as he entered the Congo. Screenshot from "Cuba: An African Odyssey"

Cuba’s response to requests from African nations and movements for aid was not limited to social service, medical, and humanitarian assistance. Cuba helped African countries militarily with their struggles just like Egypt and Zambia helped the ANC of South Africa; Tanzania helped Mozambique, and Mozambique helped the Zimbabwean liberation movements; Angola aided Namibia, just as today Algeria aids the Polisario in the former Spanish Sahara.

As no less a figure than Nelson Mandela has pointed out, Cuba’s armed assistance to the struggles in Southern Africa, specifically its 1975-1990 intervention assisting the MPLA-led Angolan government defend itself against the apartheid regime of South Africa, was decisive in determining the ultimate dismantlement of the apartheid government. (Mandela could just as easily have noted that Cuban training and aid was instrumental in helping the liberation movement in Guinea-Bissau in 1973.)

This identification with Africa and collaboration with African efforts was not commandeered by Moscow, as often erroneously propagated in U.S. press accounts. The Cubans did not force themselves unto the governments or liberation organizations so as to go and die on distant African shores. Cuban military assistance was extended as a response to a request by an officially acknowledged African government or movement. As even Henry Kissinger has conceded, the Cubans take very seriously their values and commitments; one of their most sacred values is their willingness to lay down their lives in the service of other peoples and their struggles, when asked to do so.

This last point is a very important one. It is not surprising to me that today Cuba is leading the way in the battle against Ebola. More than 5,000 Cuban men and women paid the highest price that international solidarity work can exact—they lost their lives fighting alongside their Angolan, Namibian and South African colleagues in the wars against colonial and apartheid forces during the thirty-odd years until the United Nations Accord granting Namibian independence was signed in 1990.

Those Cuban men and women who died volunteered to help defend the peoples of Southern Africa. They were not paid, they were not ordered by Fidel. They volunteered in the same way that others in another historical theatre in the 1930s volunteered to defend Madrid and the progressive values of Republican Spain.

Today, most of the world knows about and respects tiny Cuba with its 11 million people and their huge global footprint. It is the United States with its history of bullying, interventionism and its unilateral boycott against Cuba that is beleaguered and isolated.