The Curious But Violent Case of the Coconut 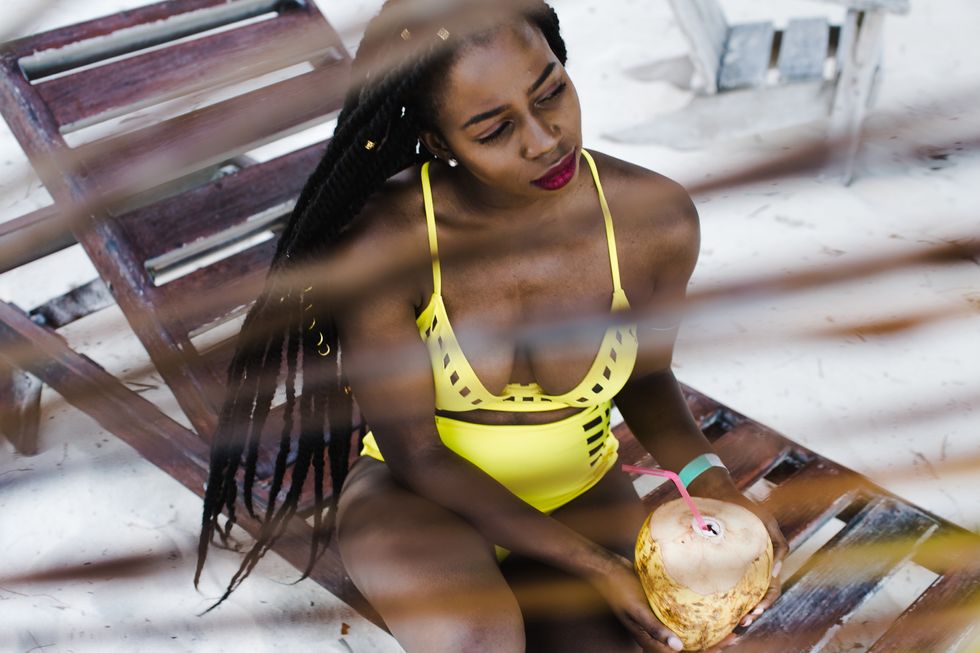 Dear, fellow Africans, please remove the word "coconut" from your vocabulary, unless you're referring to the actual nut.

Having to take a minibus taxi in Johannesburg is always a daunting task. In a country where there are eleven official languages, Zulu taxi drivers in Jo'burg seem to expect everyone to speak Zulu. This, to them, is a mark of being true black South Africans. Now imagine me, rocking one of my many funky hairstyles, glasses and quirky sense of style, asking one of the drivers where a particular taxi is going. I have had them look at me from head-to-toe with disdain, click their tongues in disgust and some ignore me altogether. I kid you not. And what I have come to know is that to many people, I am read as trying to look and sound like something I am not—a white person. Worse still, many have told me mockingly that I consider myself better than them; this private school, English-speaking, strangely-dressed coconut. For the longest time, it's stung.

Growing up, I was the black kid that that was always ostracized because I was markedly different. I listened to Coldplay, Imagine Dragons and classical opera (I was doing the most I know) and spoke with English with an accent. I ate pap with a fork instead of using my hands and always had my nose in a book instead of playing outside with the other kids in my neighborhood. Because of this, I was (and still am) called a "coconut" which feels like a deliberate stripping away of my blackness.

A coconut is a black person who is said to be black on the outside but white on the inside. In essence, while one may look like a black person on the outside, one is inherently a white person. And because blackness is seen to be equivalent to "Africaness," without the one, you cannot be the other. Unlike biracial kids whose blackness is constantly questioned because of their mixed heritage, the blackness of South African black kids is challenged on the basis of their personalities, behaviours, interests and quirks.

There are so many aspects of blackness that resonate with black people across the board. This is a great thing, and biased as I am, I believe that this is the reason black people are the most connected people on this planet. However, the flip-side to this is that many have begun to see blackness as a one-size-fits-all. This has created a dichotomy wherein certain black people are seen as being legitimately black while others are not black enough.

African families especially are guilty of perpetuating the notion of coconuts. From a young age, they chastise the black child who is reserved and prefers to read a book in a quiet corner because they are not as extroverted as the other cousins or siblings. I remember the countless times I was ordered to go play nodo outside with the others when I much rather preferred to read another of Enid Blyton's fairy tales. The prevailing sentiment is that 'typical blackness' is true blackness and that any person deviating from that particular representation of blackness should be immediately categorized as white. Blackness is treated as an either-or state of being, static and unbending in its definition with none of the grey areas that ought to exist by the virtue of the fact that it concerns human beings who in and of themselves are not strictly black and white.

A year ago I was diagnosed with severe clinical depression and anxiety as well as a social phobia and this is news that I will never voluntary share with my extended family. They will not accept my diagnosis as being legitimate. And while mental illness across race, culture and belief system is still associated with tremendous stigma, when it comes to black people in particular, there is the strong belief that we not only don't suffer from depression but that we can't. I mean, we are strong—we survived slavery, colonialism, apartheid and here we are still standing. And so instead of seeking professional help for ourselves or our loved ones, we feel that there only two remedies: seeing a n'anga because we have been bewitched or having the demons cast from us at church - both of which can feel vilifying.

As African people we need to realize that we need to stop the practice of referring to a black person as a coconut. We need to stop making blackness exclusionary. We need to stop stifling our children and their ability to enjoy life or survive it because they are not exhibiting characteristics we feel are representative of blackness. Blackness and 'Africaness' is so much more than that. Let's do better.