Death To Fascism, Then and Now: How Ethiopia Fought Back Against Mussolini 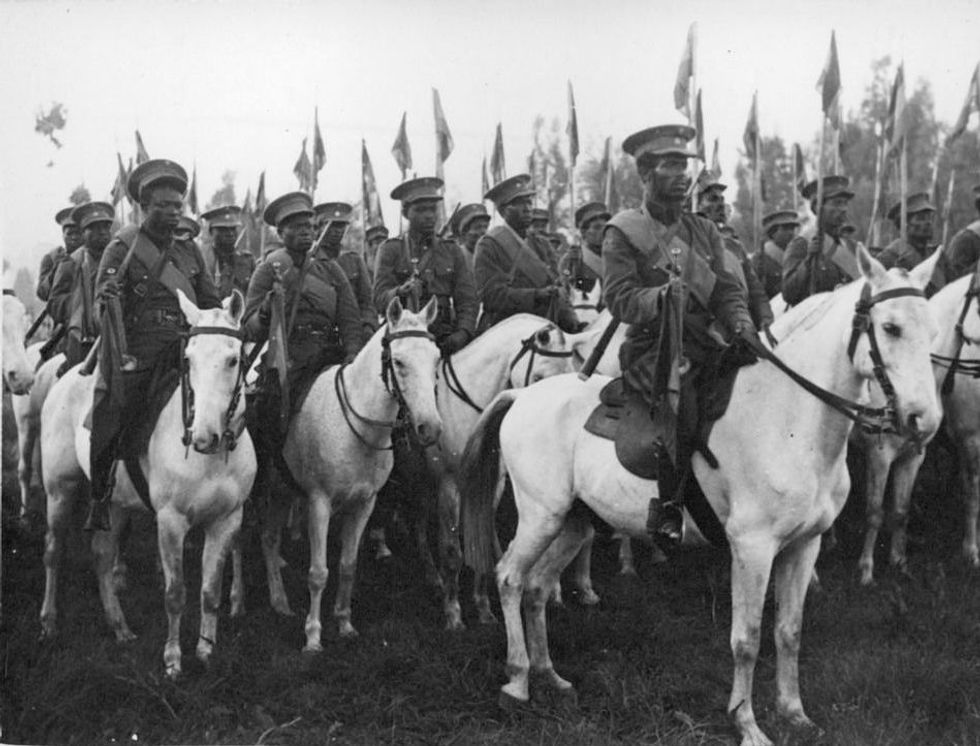 Ethiopians were the first to fight fascism. With right wing nationalism on the rise again we can take a page from their book.

Weeks back, shortly after the horrific display of white supremacist violence that took place in Charlottesville, I had a conversation.

I yelled and ranted to a poor non-drunk soul about how fascists should be treated harshly and with no sympathy. I might have said something about utilizing methods they historically used to deal with those they said were inferior.

The conversation around the rise of white supremacist fascists, as exacerbated by the Trump regime, has taken a clever rhetorical turn where, instead of us speaking about the brutality and injustice and evil that these people clamor for, we out here talking about “free speech."

Free speech is cute and good and necessary, but when that speech advocates for the genocide of a group of people, when it turns into saying they should be subject to cruelty and oppression because of this faux-biological reason and that faux-biological reason, when that talk turns physical, fuck that, because we should not allow it to turn physical, we should be shutting that shit all the way the fuck down with whatever tools are at our disposal. We can't be out here allowing fascists to grow, giving them platforms to spread their dangerous yacubian ideologies. Because, when we do, really, really bad things happen to people.

Haile Selassie, Emperor of Ethiopia, in his study at the palace via Wikimedia

In 1936 the King of Ethiopia was in Geneva waiting to speak in front of the League of Nations, an international organization that was the precursor to the United Nations. Standing somewhere between 5'2 and 5'4 and sporting a short afro, the King of the then feudal empire of Ethiopia made his way to the podium. He readied himself to make a solemnly impassioned plea to the gathered body to aid his country against an invasion from Mussolini's fascist Italy.

A group of fascist Italian journalists waited for the Emperor to touch the stage.

During the onslaught of European colonialism known as the Scramble for Africa, Italy, failed to colonize Ethiopia, eventually being beaten back by Emperor Menelik II's forces at the decisive Battle of Adwa in 1896.

With the help of the fellow Orthodox Christian nation of Russia, who sent advisers and weapons, and diplomatic support from France and Great Britain, Ethiopia retained its independence, making it the only country in Africa to do so.

Defeated and demoralized, a stain on their twisted imperialistic European hubris, Italy would try again to take and rule Ethiopia in the twentieth century under the leadership of Benito Mussolini and his newly established and armed ideology of fascism.

In 1930, in violation of the Italo-Ethiopian Treaty of 1928, Italy constructed a fort in Ethiopian territory, near the Italian Somaliland border. Ethiopia protested the incursion. Tensions grew and a fight between the two sides erupted, taking the lives of around 110 Ethiopians and 30-50 Italians and Somalis. The League of Nations took a stance of neutrality, a neutrality that benefited Italy, deciding that neither side was at fault. Hoping to keep alive the possibility of Italy as an ally against the growing threat of Germany, France and the U.K. did not condemn the Italians.

A string of developments in the region, particularly Hitler's militaristic intentions, allowed Italy to operate freely in East Africa, their colonial ambitions unimpeded, they began to prepare for their jingoistic pursuits.

It was a green light for the fascists to begin a massive military buildup on the borders of Ethiopia, to finally, after the embarrassment of defeat in the 19th century, take what they believed to be rightfully theirs: Ethiopia.

With an Italian invasion imminent, Selassie readied the Army of the Ethiopian Empire, a force of around 500,000 poorly armed soldiers, many carrying just swords and spears. Understanding his country's stark disadvantage, Selassie issued a Mobilization Order that read, “Women with babies, the blind, and those too aged and infirm to carry a spear are excused." Everyone else was to head to Addis Ababa to defend the country.

“Anyone found at home after receiving this order will be hanged."

Though he could speak French, the official language of the League of Nations, the Emperor symbolically choose to address the body in his native Amharic. The Fascist Italian journalists in attendance broke out with loud jeers as the exiled Ethiopian leader began to speak. Pandemonium ensued.

The fascist were eventually removed by police, order restored. The Emperor then began again:

“I, Haile Selassie I, Emperor of Ethiopia, am here today to claim that justice which is due to my people, and the assistance promised to it eight months ago, when fifty nations asserted that aggression had been committed in violation of international treaties."

With no official declaration of war, Italian General Emilio De Bono crossed the Mareb River into Ethiopia from Eritrea in the early morning hours of October 3, 1935. A few months later, the Ethiopians would win a victory in what became known as the Christmas Offensive, beating back the Italian forces. The defeat brought about the introduction of chemical warfare into the conflict. The Ethiopian offensive was eventually halted and rain of poisonous gas devastated Ethiopia and its population.

The emperor continued, “The very refinement of barbarism consisted in carrying ravage and terror into the most densely populated parts of the territory, the points farthest removed from the scene of hostilities. The object was to scatter fear and death over a great part of the Ethiopian territory. These fearful tactics succeeded. Men and animals succumbed. The deadly rain that fell from the aircraft made all those whom it touched fly shrieking with pain. All those who drank the poisoned water or ate the infected food also succumbed in dreadful suffering. In tens of thousands, the victims of the Italian mustard gas fell. It is in order to denounce to the civilized world the tortures inflicted upon the Ethiopian people that I resolved to come to Geneva."

Haile Selassie in Jerusalem via Wikimedia

The much larger country of Italy would be successful in their conquest, occupying Ethiopia from the end of the colonial war in May 5, 1936 until their defeat in WW2 during the East African Campaign in 1941. A diverse range of Allied forces from the British Empire, in addition to Ethiopian irregulars, the Free French and others participated in the campaign against the Axis power. At the war's end hundreds of thousands of civilians and combatants were killed or wounded.

Spain, who in 1936 erupted into a civil war after a group of conservatives known as the Nationalist orchestrated a coup against the democratically elected left leaning government, along with Ethiopia, became the first arenas of large scale war against the authoritarian ideology of fascism. With the large western powers that would come to form the Allied forces refusing to take decisive and concrete action to help the socialist, communist, and anarchist units that made up the Spanish Republicans or the Black African Ethiopians, the European fascist movement grew emboldened and stronger, expanding their fascists atrocities from Ethiopia and Spain further into Europe and the world, a conflict that would develop into the catastrophic loss of life that was WW2.

As he wound down the speech, Selassie asked the assembly, “what measures do you intend to take?"

As he walked away from the stage, he has been reported to have said “It is us today. It will be you tomorrow."