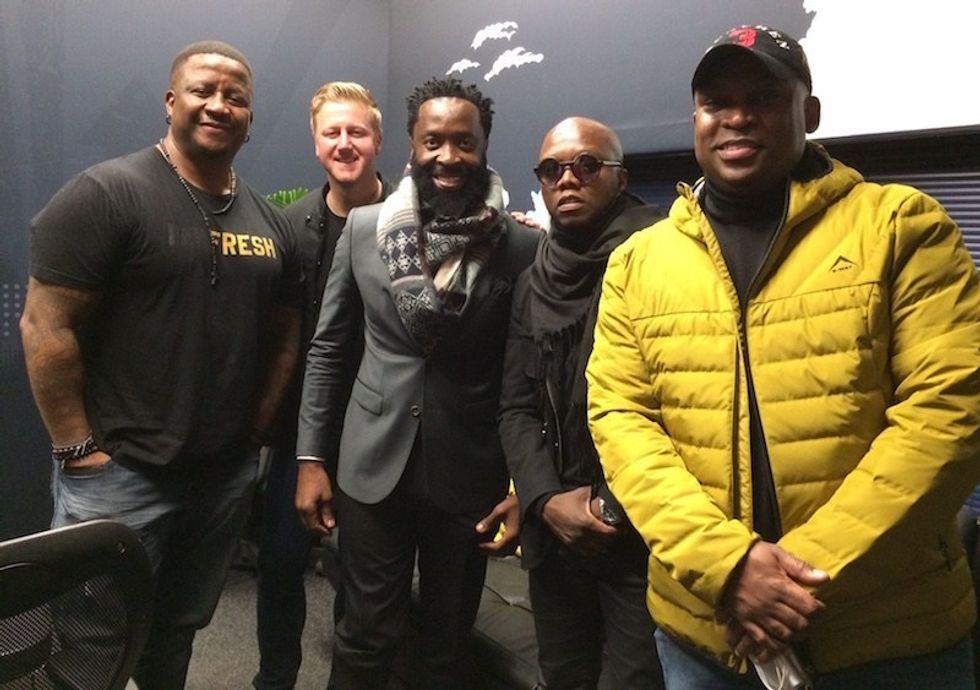 South African radio royalty discusses the pains and pleasures of the industry.

DJ Fresh, DJ Sbu, Tbo Touch, Gareth Cliff and Robert Marawa are all accomplished radio and TV personalities in South Africa. Recently, they treated radio fans to a conversation among the five of them. The discussion spanned more than an hour and a half, and it focused on the pains and pleasures of working on radio in the country. The legends each gave their takes on various issues such as reshuffling, changing lives with their work, adapting to new trends, radio in the Internet era, and the complicated politics at play.

All five of them have had their fair share of drama and controversy. DJ Fresh was fired by Metro FM for using profanity on air, and recently signed a contract with 947. Phat Joe was pulled off air "until further notice" for homophobic comments he made on his Radio 2000 show last month. TV and radio presenter Robert Marawa, who was let go by Supersport in May, according to him, via SMS, still has a show on Metro FM.

Touch resigned from Metro FM in 2016, and went on to start his own online radio station, Touch Central. DJ Sbu was let go by the SABC in 2015, and went on to start the online station Massiv Metro with Massiv Media. Gareth Cliff currently owns Cliff Central, the online station in which the conversation was being held on the Pure Conversations show. Cliff left 5FM in 2014 to start Cliff Central.

Which is why a conversation among the five personalities was always bound to be a must-listen. They speak about the hard work the goes on behind the scenes, and how those who want to follow in their footsteps should put in the hours just like they did.

The conversation was inspired by a now-viral tweet from comedian Trevor Gumbi, who encouraged the big guns to join forces and start their own radio station. He introduces the episode with his curt sense of humor, poking fun at his counterparts and himself.

Listen to the whole conversation below: