The Doctor is In: Kelechi Anyikude on What Ails Nigeria's Super Eagles 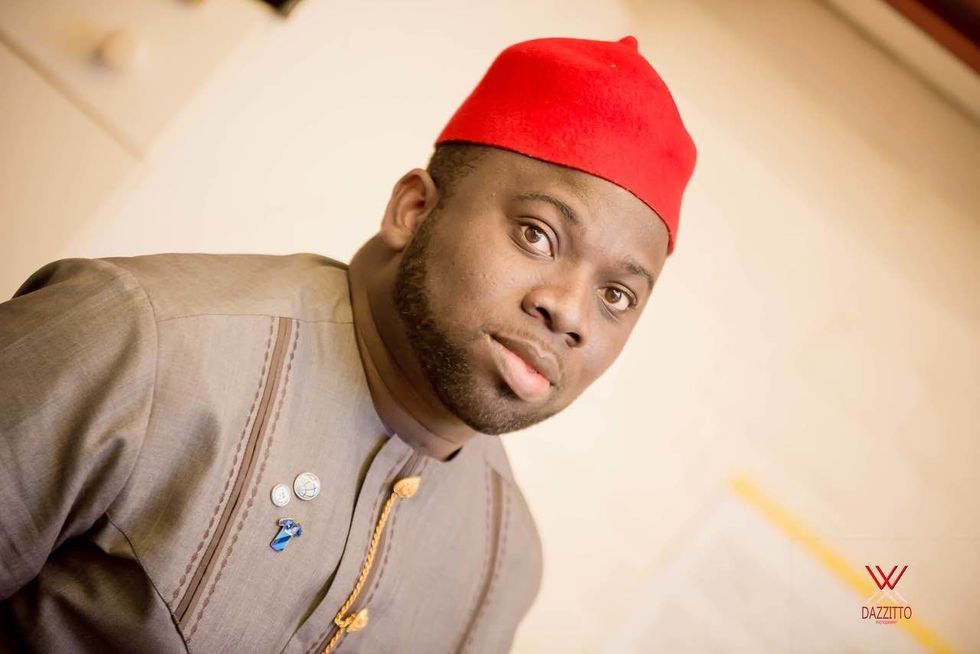 We profile the man who has become an unofficial ambassador for Arsenal football and Nigeria through his passionate take on the beautiful game.

To football fans, Kelechi Anyikude is something of a cult figure. He's often seen at Arsenal games in outfits of different Nigerian ethnic groups and a talking drum which he beats to cheer his team on. His rich bass and full stature adds a physicality to his growing reputation as a football superfan.

If he looks like a joker, his doctorate in energy and environmental engineering acts as a hefty counterweight. In a true spirit of fandom, he wore an Arsenal jersey while graduating with a PhD from Leeds University. Dr. Anyikude’s enthusiasm for football is infectious. Speaking over coffee in central London, his chatter brings back warm memories of growing up in Nigeria as a young football fan.

To Anyikude, credit goes to Nigeria’s national team, the Super Eagles, for instilling a “federal character” in Nigerians. “Federal character” implies an allegiance to country as opposed to tribal or religious differences. In Nigeria, the divide between tribe and country runs deep both in public and in private life.

Emmanuel Amunike and Daniel Amokachi are two of Anyikude’s favourite Super Eagle midfielders of all time, with Amunike edging out Amokachi only because he comes from Anyikude’s hometown in Owerri. I ask him if this is the “federal character” he likes in players and he laughs hard. Tribalism is a minefield in conversations about Nigeria.

Of the defenders, Taribo West and Ikechukwu Uche come tops but it is his choice of a favourite goalkeeper—Vincent Enyeama—that surprises. Enyeama is Nigeria’s most capped player and ex-captain currently playing for Lille. I'd expected Dr Anyikude to say Peter Rufai from the U.S.A. 94 team, but neither nostalgia nor past glories have a complete hold on him.

Clement Westerhof is the most successful Super Eagles coach, having won more Africa Cup of Nations than his former team captain and then predecessor, the late Stephen Keshi. But out of respect for the dead, Keshi comes first. I listen to the doctor reel off these names and events as though they were commentary on the running images in my head. These victories by the national teams were rare moments of cohesion among Nigerians.

I was 12 in 1996 when the country won gold in football at the Atlanta Olympics. The semi-final against Brazil—a team that included Bebeto, Rivaldo and Ronaldo—had some of the most thrilling football many had ever seen. Late goals from Ikpeba and Kanu overturned a 3-1 deficit leading the under 23 team to a 4-3 victory and perhaps the greatest Olympic match ever played.

The finals against Argentina (whose team included Crespo, Simeone and Ortega) could not have been sweeter. Down 2-1 against such a team, even after a win over Brazil, last gasps heroics could only be hoped for. And this came when Amokachi equalised in the 74th minute.

The game was all but headed for extra time with a dreaded penalty shootout looming if no winner emerges. But with one minute left until the final whistle, Dr. Anyikude's beloved Amunike scored and sealed the victory. What followed in my neighbourhood in Kaduna and all through the country and continent was unfettered jubilation. "Federal Character" gave way to "Federal Fever."

Dr. Anyikude’s support of Nigerian footballers is not consigned to public victories. He tells of how he's been to Arsenal ladies games four times so far to see Asisat Oshoala, the Nigerian international, play. He wants her to know how proud he is of her, knowing that such genuine support from a fellow Nigerian will surely boost pride in playing for one’s own country.

Anyikude bristles when he recalls Nigeria’s bronze at the 2016 Rio Olympics. Coached by an ex-Eagle Samson Siasia and captained by Chelsea’s John Mikel Obi, it illustrates the belief people have for the Nigerian team that coming third place seems like the least they could possibly have done.

He is equally excited about the appointment of Gernot Rohr as the technical adviser. Rohr, who has coached the national teams of Burkina Faso, Niger and Gabon, is a German who at club level took Bordeaux to the 1996 UEFA finals but lost against Bayern Munich.

Just recently, Rohr concluded a visit to Emirates Stadium where he had an audience with Arsene Wenger and watched Alex Iwobi and Asisat Oshoala play—part of his tour of foreign-based players. Dr. Anyikude is very approving of the German’s approach so far, but is disparaging of Sunday Oliseh’s troubled and short-lived reign as head coach of the Super Eagles, though he still thinks highly of him as an ex-Eagle.

One surprising fact about Anyikude is that he abhors swearing, especially in the stands during games where gentlemanliness isn't the watchword.

One unsurprising fact about Anyikude is that he loves the attention. He tells of how, after a recent Arsenal game, close to one hundred people asked to take photos with him. A few days after we meet, BBC Sport will come to his house in Leeds to interview him.

Rather than use all of the public and press attention for his own selfish gains, Dr. Anyikude, unpaid and unelected, has become an ambassador for Nigeria, Arsenal and football in general. In this, he's like a mirror that will take in almost as much light as it reflects.