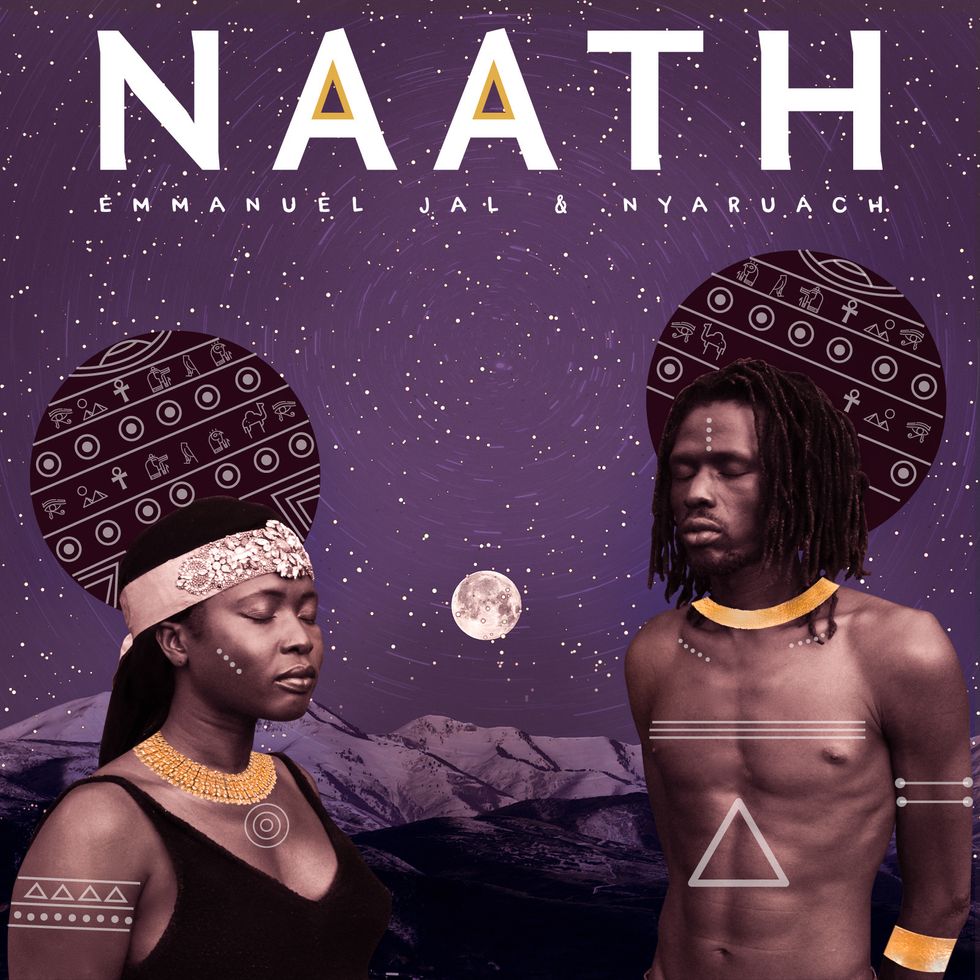 Emmanuel Jal collaborated with his sister Nyaruach, who's currently living in the Kakuma refugee camp, for this new full-length.

There's a lot you can say about Emmanuel Jal, his story is one of almost unparalleled narrative. Jal was a child soldier in South Sudan-turned-refugee, he later became a rapper and has now turned into an internationally-recognized spokesman for human rights. At his core, however, Emmanuel Jal (38) is still just a man making music; a ball of some strange creative energy that has to find release.

His latest album, Naath, released back in June 20 to coincide with World Refugee Day, is something slightly outside the box for him. This is a family affair, made with contributions for his sister Nyaruach, who currently resides in the Kakuma refugee camp in Turkana county, Kenya. OkayAfrica caught up with both Emmanuel Jal and his sister Nyaruach to talk about the Naath album, their first collaborative full-length record, the core of music and why creativity is vital to everyone.

What does Naath mean and why did you choose that name?

Emmanuel Jal: It means humans, it means beings, like the highest name you could ever give human beings. So the Nuer people—where I come from I'm a mixture of Nuer and Dinka—all of us use to call us each other Naath. It's a name from way back, going back into Egypt, it's even Arabic-borrowed. So it's way back before Egyptian time. It's not a tribal name, it's a name that includes everybody.

So, as long you believe that you are a human being, you will obey the laws of the land, respect other persons, take care of the culture and walk in your purpose, then you are a Naath. It helps destroy tribalism because, if they embrace that name Naath, then they are reminded of who they are. Names bring a frequency which allows you to cooperate in a certain way.

This album was made as a way to have fun in music and be positive, to keep the culture alive, to bring our culture into the modern situation and mix it with afrobeat.

Nyaruach: This album means a lot of different things, it means to share what's inside our heart and to change our nation and the rest of the world. Music means happiness.

Emmanuel, hearing your recent track "Be The Love," it seems like you're going for a more reggae style, is the new album in the same vein?

Emmanuel Jal: That songs actually a different campaign, a single to mobilize and to keep people alive. The Naath album is just an upbeat album, if you play it at a party you'll be cracking it. Its afrobeat mixed with South Sudanese [music], its one to just get you moving. My sister sings, some South Sudanese chanting style, it comes in nice with the Afro Beat. You know how Africans are, everyone just want to have fun. This album is really just fun. We're there, my sister's just cracking it, her voice will make a unique stand in the universe right now. Because the style that she has brought in is totally different.

Tell us about the album single "Ti Chuoung"?

Your sister is in Kakuma, can you tell me a bit about her situation presently?

Emmanuel Jal: Well you know that Kakuma refugee camp is hell, if you're in a refugee camp you're in a prison. A lot of things happen there and nobody talks about them. It's a prison with no proper protection, but you have no option. When you become a refugee in European countries you have rights! If the police beat you up, you can sue somebody, but there (Kakuma) you have no rights.

Is the new music a reflection of that situation, and is this album partly about life in Kakuma?

Emmanuel Jal: The idea here is to think positively despite your challenges. To paint that picture, that beautiful place you see and dream about.

Nyaruach: I'll be able to perform one day with my brother when he comes back to Nairobi; now I'm still a refugee, but I have hope to see him again.

Is this album trying to turn the spotlight onto the refugee situation in Kenya?

Emmanuel Jal: Well what we're doing here is to show the artistic level of refugees. I'm a refugee and now I'm a global citizen, for example. So, it's just communicating our sounds and also putting a spotlight on refugee statuses, showing the fact that refugees have talent. 'Refugee' is just a name put onto us. We have dreams, we have talents, we have visions, we have purpose and we want to contribute. We want to contribute to human kind.

Nyaruach: I describe my experience as reporting or singing to spread my message through the music. I hope the album brings attention to that. Music is great in the world, music makes a difference. Music means a lot to people.

Right now, there's a lot of happening globally in terms of African artists. Where do you see the progression of South Sudanese music going?

Emmanuel Jal: It's actually opened a door for our sound to be there. I've been in the industry for a long time; it's hard to find a refugee or an ex-child soldier from Africa staying in the industry, especially from Kenya. For me I've been around since I got a hit in 2005. You need successful stories to show that music can actually sustain artists. Take my country (South Sudan), we've been at war, where will we find music in the marketplace? It's a good thing, you know, you don't have to sing to your tribesmen or women only. Music is love, man, if you wanna know what love is, it's just music, everything moves with it.

Emmanuel, after six albums, dozens of songs, movies, tours, and TED talks, does your messaging of peace have an undertone of frustration?

Emmanuel Jal: We live in a world where success is measured by value, by the money you have in a bank account. But I think the biggest success is a person being able to find heaven within themselves. For me I found heaven inside and, for me, that's what I'm trying to bring out. There always needs to be patience and the understanding that human beings have limitations. I also look at myself: I am a human being, I can make mistakes. But, for me, walking in my purpose is my painkiller. Its like my song "Be The Love," I want those words to be my life, it's a mantra, I want it to be a solution.

There's nothing man has made that's visible and we can touch, that didn't exist in some one's mind beforehand. As long as we can feel it in our minds, we can channel it in our bodies.