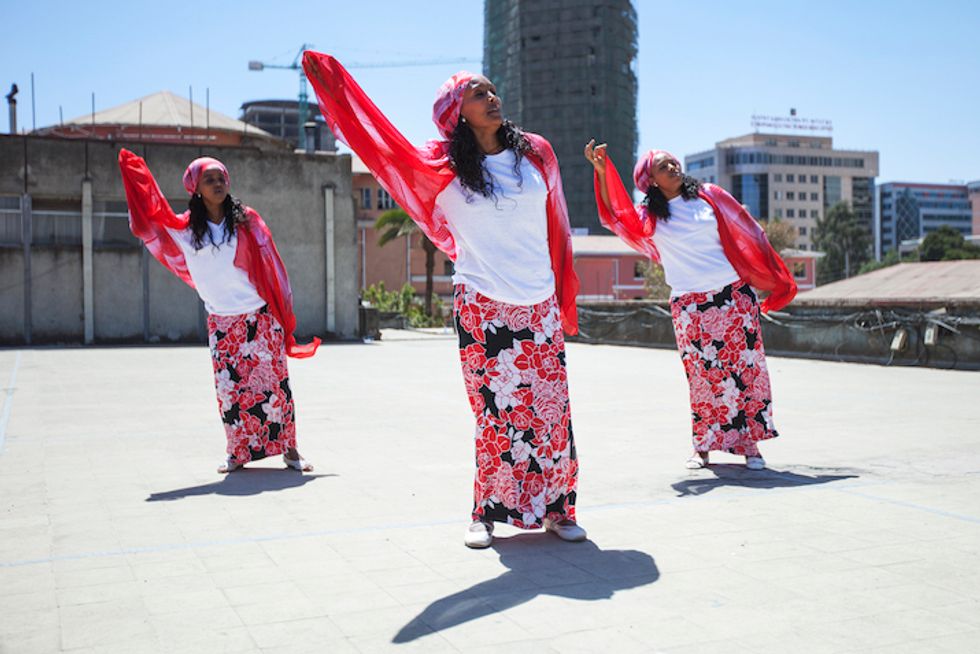 All images courtesy of Stocktown Films

Ethiocolor is an all acoustic group, known both for their performances on the road and as the house band for one of Addis Ababa's most important cultural hubs, Fendika. With musicians playing together that span three generations, Ethiocolor exemplifies what it is to honor traditions while remaining innovative, and carrying a culture into the future. The closest you can get to the electric energy of spending an evening at Fendika is spending an hour with Ethiocolor's beautiful self-titled debut LP, released on Selam Sounds.

I met Teddy Goitom of Stocktown Films at The New School's Afrofuturism Conference in New York City last month. We were talking about Ethiopian music and he casually mentions that he recently worked on a music video for the Ethiocolor. I exclaim, "That's one of my favorite groups!" and he passes me his phone as the video starts playing. I watch for a few seconds and he says "Now, move the phone." I do, and the image moves, as if I was personally standing on this rooftop in Addis holding a camera phone in the center of all these musicians. Before Teddy knew it I had passed his phone around to all my friends at the conference, and I didn't know it, but I was viewing the video through a beta version of Ethiocolor's app, being launched today on Google Play alongside their 360° video for the song "Mali Malonayie."

I had a chance to interview one of Teddy's creative partners, Senay Berhe of Stocktown Films, for the launch. We spoke about the video, Afripedia, and how what very well may be Africa's first 360° music video was filmed with just one camera.

Download the Ethiocolor 360° app for Android via Google Play. An iPhone version of the app is coming soon.

Gabriel Teodros for Okayafrica: Tell us a bit about the process. Where and how was the video filmed? How important was it for you to work with Ethiocolor on this project?

Senay Berhe for Stocktown Films: The Ethiocolor 360°music video was shot during a half day in January 2015. We filmed it on the roof of the national theatre in Addis Ababa with a GoPro camera. We had seen Ethiocolor perform live earlier both in Stockholm and Addis Ababa at Selam's annual music festival. We were struck by their performance on stage and approached them during our visit in Addis and presented the 360° idea. Ethiocolor and their record label Selam Sounds loved the idea and we decided to shoot it in just a couple of days. The 360° technology makes it possible to experience Ethiocolor and their performance in a new way. The viewer comes closer, almost as they were there in Addis to experience Ethiocolor's great live act.

Okayafrica: Were there any challenges in the process, and how did you get through them?

Berhe: One of the challenges during the shoot was that we only had one GoPro camera. It made the shoot a little more difficult and time consuming. We had to mark out positions for all the band members and keep track of all the positions to be able to stitch the seven different takes together for the final composition. Although, the biggest challenge has been how to present the video in the best possibly way. We wanted to make it as an experience for your phone, something that you can watch and share with your friends, but also as an online experience. The lack of budget meant it took some time to find the right partners. Eventually we hooked up with Earth People, a bunch of talented developers that helped us out with the Ethiocolor 360° app. Luckily for us YouTube released their 360° player on Chrome earlier this year where we could release the online experience.

Okayafrica: Both with Afripedia and this latest video for Ethiocolor, your approach to filmmaking seems very innovative, combining new technology and interactive ways of storytelling with music from all around the continent. How and why did you start bringing these pieces together?

Berhe: With Stocktown Films, we want to tell stories about passionate people who love to do what they do and our focus especially with the Afripedia documentary series is to highlight African creatives that usually doesn't get the attention we feel they deserve. New technology makes it possible for us to share the stories in new ways, make it more accessible and reach out to a wider audience.

Okayafrica: It feels like the concept of a 360° video is just one baby step away from virtual reality. Do you feel like your film work will continue to move in that direction?

Berhe: Finding new stories and storytelling will always be our primary focus. In which format it will be presented will always come secondary. But it's always challenging and fun to try new tools. It creates new possibilities. That is something we are open for and have had in the back of our heads since we started.

Okayafrica: Let us know if there's any projects you all are working on that we should be looking out for?

Berhe: Stocktown Films wants to create the best online platform to highlight African creatives from all over the world. A place to connect and get inspired. Have a look out for Afripedia.com.