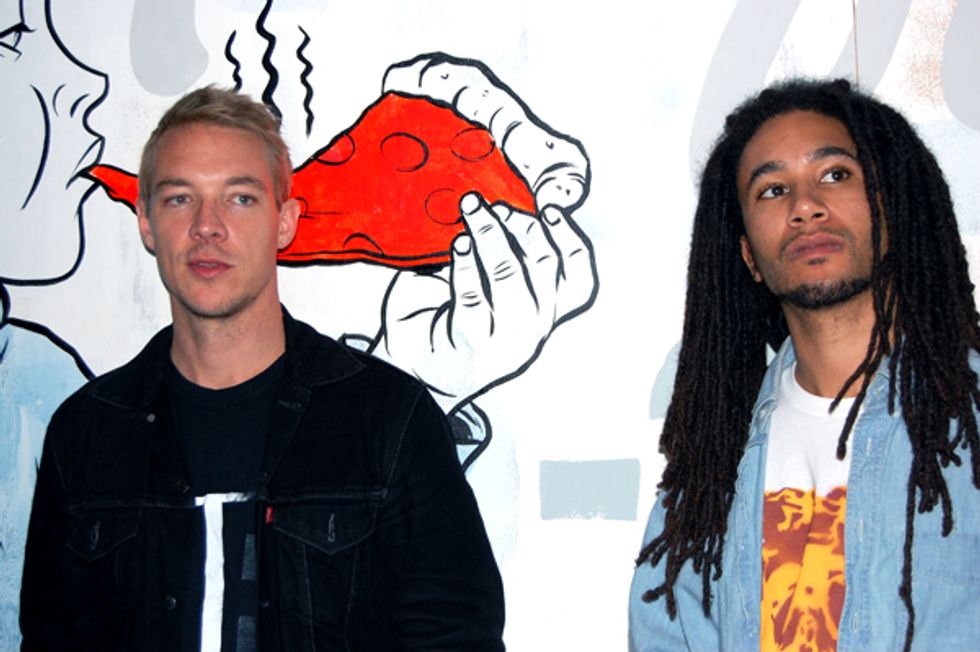 words and interview by Eddie "STATS"

Okayafrica sat down recently with Diplo and Chief Boima – two leading lights of the movement/moment called tropical bass, global bass or global ghettotech (depending who you ask) to chop it up in earnest about the politics of dance music in 2012.  Having pointed followers of @okayafrica to Boima’s essay on “Global Genre Accumulation," we came under some twitter-fire from Diplo ourselves. That minor outbreak of beef (veal, really) created, however, the opportunity for a more, um, fruitful dialogue. We got the two to go deep on the issues at stake in the current globalization of underground music, which parallels economic globalization in ways that are both powerful and sometimes troubling. Read an excerpt from the interview below in which the two touch on kuduro, baile funk and Nigerian pop. Head to Okayplayer for the full article.

STATS: ... Even though there’s all this freedom of exchange, that DJ list still reflects that old world model of some European capital being the center of culture. Take (Lisbon kuduro group) Buraka Som Sistema–they have access that people from Angola don’t. I mean it’s not their fault, they make great music and they try to put a light on Znobia or other Angolan artists…but still it’s recreated, somehow.

Diplo: I mean nobody in Africa reads Mixmag [actually DJ Mag-ed], like maybe a few DJs in Johannesburg. It’s like voting in America, who goes to vote in the polls in November? It’s like old retirees, it’s misrepresented. I’m not even on that list. The people who vote for that are Northern Europeans and Eastern Europeans, like American’s don’t even vote for that list.

Boima: Well, that list is obviously problematic, off top. What I was trying to draw it into, is–like you said, there’s this world with a little more grey area, like, Yo the internet has freed up all this information, you don’t really have to travel to access it. I don’t want you to think that I don’t travel as well, I worked with musicians in Liberia myself. But the point is there’s still a politics involved in our scene.

Diplo: Can we put a name to this scene we’re talking about?

Boima: It’s not a name, it’s a concept, right? It’s not-the-top-100 Ibiza or Pacha, even Johan (of Radioclitand The Very Best) is producing under the name We Don’t Belong in Pacha. There’s this conscious, against the grain of that old school way of thinking. But what I’m saying is that even amongst all of us, even amongst my homies here in New York, there are separations between us that still exist structurally. Yeah we can go around the world and get similar experiences in New York, Dubai wherever. The thing that people don’t really draw attention to is the fact that folks in Cambodia can’t really get visas to come here, and don’t have the same amount of mobility as we do.

I guess I should mention that my background interest is in development. I’m in that kind of field–went to school for it–to figure out as a DJ, what’s really happening in the world. So that whatever my contribution is, I can start to tackle some of these inequalities that exist.

STATS: But even where those disparities exist–don’t you think that what Wes is doing frees it up more? Don’t you think trying to cross those lines, as people hear the music more…does that contribute to the disparity

Boima: I think there’s a role to play in this introduction, normalizing or mainstreaming ideas of foreign-ness. So from the perspective of Africa: in the 80’s Africa was Eddie Murphy in Coming To America. Now we’re in an era where Africans can be more mainstream-accepted, maybe a D’Banj can be looked at as fitting into this American sense of normalcy. But it’s not really challenging the status quo, the US is still a dominant force culturally.

>>>Read the full interview at Okayplayer