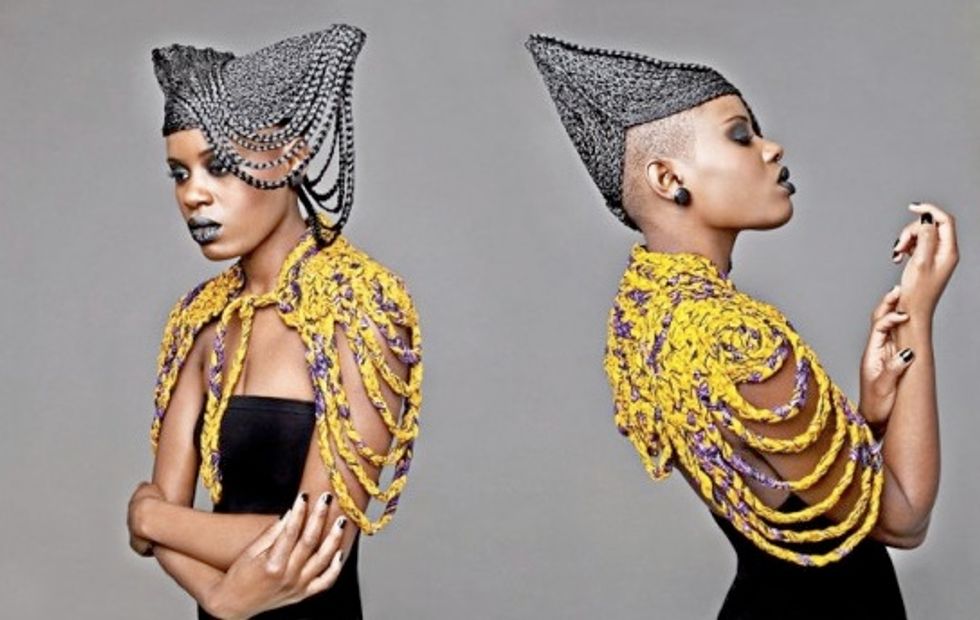 What is your relationship with all the fashion designers presents at this event?

Some of the designers at the event have been part at an early stage when we still worked on promotional activities such as TV-interviews, the editorials with Quality Magazine and Celesque as well as a feature on German-French channel Arte and various other publications on and off-line. The first Africa Fashion Day Berlin production took place in June and since June I build up a great relationship with Romero Bryan, and the PR of Jose Hendo, Melanie Jones.

I've followed and admired the work of some of the designers and in my research discovered so many more designers of the African Diaspora who are innovative, highly skilled in their craftsmanship and resourceful. Many of them are not available here in Germany and Europe or only limited exposure here. I believe it's down to a mix of lack of awareness by buyers, lack of not only opportunity but accessible opportunities for those designers. Those are obviously just some of the reasons. However my aim is to address the gap in the market here. I also don’t think it's a case of labeling them as African designers or designers of African heritage – they happen to come from that culture but they are International designers designing for women and men anywhere in the world and have an amazing alternative aesthetic to offer.

What will be the repercussions for all these designers?

Repercussions? This sounds a bit daunting. I am hoping that through Africa Fashion Day Berlin presents Urban Fashion Night we are offering them a way into the market in Germany as well as elsewhere. Attention from the press, maybe even investors but most importantly buyers. Some of them are new to the industry we also hoping that this can be a useful learning curb and will expand their network and resources overall.

You are clearly bringing something to the fashion landscape by featuring African, African American and Afro-Caribbeans designers in Europe but if you could change one thing about the fashion industry, What would you change?

There are actually two things I would change: firstly diversity – we need more diversity within in all aspects, business, catwalk (models), designers. Secondly accessibility - it is such a competitive industry and very expensive for a designer until he gets a break and even then it takes time before the business becomes profitable.

Tell us something about African fashion most people don't know.

African Fashion is as diverse as the continent itself. Most people do not know that African Fashion can be high end and Made in Africa products also have the same quality like Made in Germany products. The biggest fashion labels in the industry have borrowed from Africa over the years yet the public wants to be in denial over this or simply really doesn’t know.

Today, we are experience a lot of emerging artists who are really creative, do you think that your selection of designers is bringing something new?

Yes, I think they are bringing something new. In the end, the public is the judge and jury.

You're about to be stranded on an island with one person and one Africa Fashion Fay Berlin's designer piece, who would you choose and which piece would you pick?

I couldn’t possibly choose amongst the designers, they are fabulous each in their own way. As for that special person…: that remains private. ;)

Today, we have the emergence of many African fashion week in many countries. This evolution is the proof of the existence of African fashion, should African designers be present in regular fashion weeks?Is there any discrimination?

Yes, of course, they should be in regular fashion weeks and some of them are. There is discrimination based on meeting basic guidelines and requirements that some don’t seem to be familiar with. If the designer doesn’t meet them, they won’t stand a chance. There are also issues around funding and accessibility and lack of knowledge of the industry a designer is trying to break into and that can be purely down to what socio-economic group one is born into. At the same time that shouldn’t define or limit you but it will make things harder.

African fashion and its evolution are exciting to watch! The colours, cuts, the innovations, originality and its diversity displayed are second to none. African Fashion has a love for colours, shapes and the unexpected. I am also seeing more head wraps amongst European women and it is an absolute joy to watch these influences across the world. It is all about embracing, accepting and respecting one another. It is not about exclusion. There is a beautiful saying: Out of many come one.

What are your hopes for the African fashion?

My hope for African Fashion is to be regarded on par on a world stage with the big mainstream fashion houses. I believe the talent is definitely there to do so.

What's next? Do you have any other event planned?

Next is a short recovery phase before we plunge into the next season. I definitely have more plans on the back burner but they are yet to be revealed. Watch this space.