Fela Lives: How Felabration Is a Timeless Moment to Honor What Fela Kuti Stood For 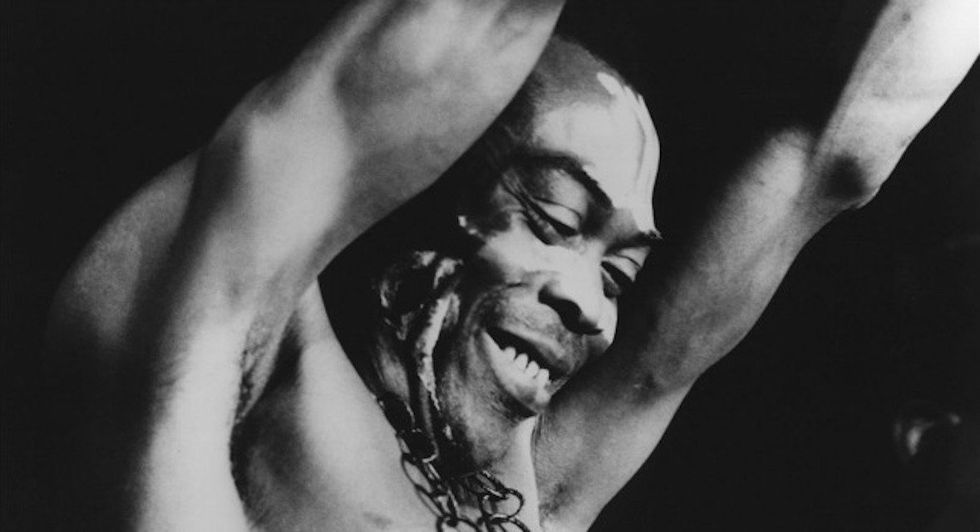 An ode to the Black President as we kick off celebrating his birthday and 20 years since his passing this week.

"There is a higher law than the law of government. That's the law of conscience." —Stokley Carmichael.

Few people in history of Nigeria have had the power to expose the innate, unrelenting and abiding corruption in the marrow of Nigerian leaders as Fela Anikulapo-Kuti. Fela—who needs no introduction, no reference, no subtext—lives on in the psyche of the people, in their fashion, in their musical aspirations, in their poetry, in their anger, in their hope. This week, Felabration begins, marking its 20th year celebrating the life, legacy, and significance of Fela since his death on August 2, 1997.

In 1998, Felabration was conceived by Yeni Anikulapo-Kuti—a radiant figure with a hair full of colored beads and the soul of her father. Her idea was to create a week of festivities in which people would celebrate Fela. It holds once a year in October, during the week of Fela's birthday. Felabration activities are often centered around a theme, and this year's is called, 'The Prophecy: Fela Lives!'

Felabration has shown itself to be more than just a festival of music and art; it has proven to be a powerful voice in uplifting Africa, encouraging black pride and proclaiming that black lives matter. When we look at the essence of Fela—his defiance, his energy, his love for the people, his disdain for corruption and its fatal effects on a nation grappling with post colonial daze—we see how deeply he sensed the desire of few to enrich themselves, the sorrow, tears and blood of the masses.

Celebrating Fela is akin to breathing. It is the hope and significance of truth that is amaranthine, even after the body dies. We were told that Fela's body died on August 2, 1997. But truth does not die. This knowledge is not exclusive to anyone who has ever been privy to truth. However, it takes on a powerful significance for Nigerians, who, for decades, have endured the same issues Fela sang about. It has powerful significance for Nigerians who continue to live with Authority stealing, whose leaders still lose billions of dollars in oil money (this magical oil money that has disappeared consistently over decades of recycled leaders), whose brother was given a necklace of rubber and set ablaze by the misplaced anger of a hungry market square. Corruption is not this abstract thing, this nepotism, this 'na turn by turn' life; one day you sef go hammer. This corruption is the virus that has our youth stark raving mad in the streets because the elders have made off in private jets with their inheritance. It is the 18-year-old girl coerced into sexual relationships with professors too dumb to teach, only brilliant in selling grades for sex and money. It is your 87-year-old grandfather, who worked dutifully as a civil servant for 52 years, who served colonial masters, who loves twilight, who sits on his verandah night after night wondering when his pension will come in. It is your cousin, who has applied for 726 jobs to be precise, who has received 0 calls for interviews, who has no godfather, no connection, no source of livelihood.

Fela was both a prince and a prophet. A timeless voice, often persecuted, never silenced. Fela Lives! You can hear his music everywhere in the world; in Soweto, in Harlem, in Kyoto, in Birmingham, in Brazil, in Korea, in Ikeja, in your heart. He knew that truth was the only thing he had and he yelled it from the rooftops. The rancor of his voice, the gleam in his eyes, the fervor in his music, the unquenchable fire in his essence has ensured he never died. Fela is Nigerian, his tenacity, his resilience. He is an ephemeral being, one we will never fully know; yet he lives in the depths of our psyche, his voice a clarion call. He is a collective metaphor for the average Nigerian—beaten, cheated, betrayed, deceived yet still standing. Always standing.

Felabration has become a premier festival for artists and musicians worldwide who look forward to paying homage as well as carrying on Fela's legacy. If you have never made it to any Felabration, it's imperative you attend any of the events slated for the rest of the week at New Africa Shrine, Freedom Park, Radisson Blue, Kalakuta Museum and several others. A full list of events is available on the official Felabration website.