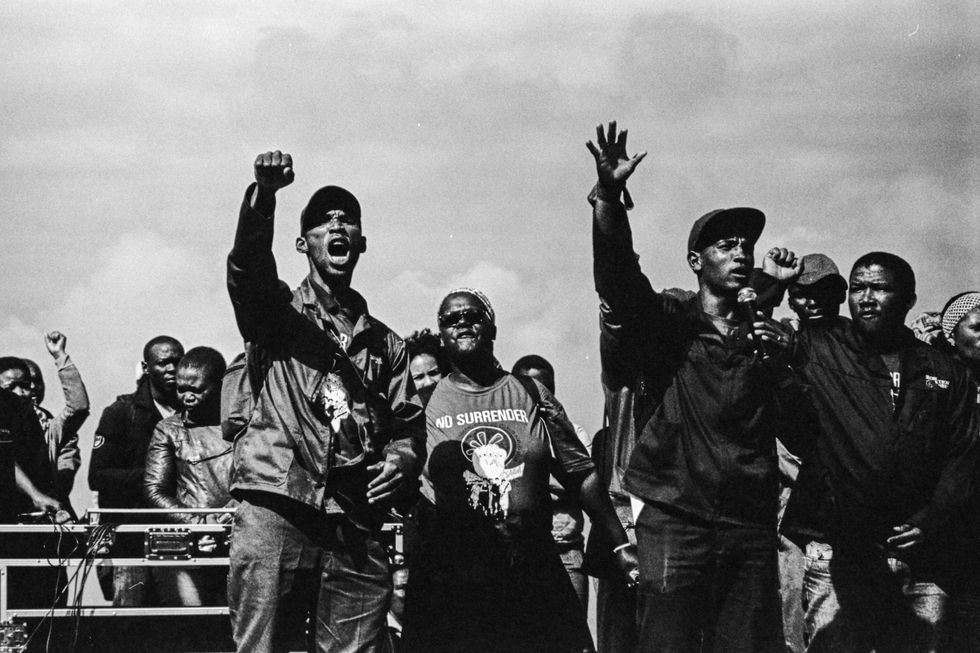 An in-depth look into how Steve Biko and the Black Consciousness Movement lives on through the born-free's fallist movements.

“All three of us grabbed Biko and we took him to one corner of the room and ran with him into the wall...His head hit the wall first."

This was Daantje Siebert's confession before the Truth and Reconciliation Commission in 1997 about activities that lead to the death of Stephen Bantu Biko.

Naked, shackled and unconscious, Biko, the father of the Black Consciousness Movement and hero of South Africa's liberation struggle, died in a prison cell of brain hemorrhage sustained while in police custody on September 12,1977 at the age of 30.

Under the pseudonym Frank Talk, Biko fought for the liberation of South Africans from the chain of servitude in his column 'I Write What I Like.' Due to his political activities, Biko was banned in February 1973. Consequently, he was forbidden to write, speak publicly, talk with media representatives or speak to more than one person at a time among interactions.

Biko remained banned till his death as one of South Africa's greatest sons was arrested under Section 6 of the Terrorism Act on August 17, 1977. He never returned home.

Despite having no memory of the apartheid era, black South African youths do not consider themselves free or believe in the rainbow concept as they continue to face the same inequalities as the Struggle Generation.

"I think one question we can answer with confidence is that very few if any, young black South Africans believe in the rainbow concept as it has been explained by whiteness," Deshnee Subramany, news editor at The Huffington Post South Africa, tells me about the rainbow concept. "That we are all part of a rainbow nation that means we are all equal, is something not many people I know either, elders and young people, believe in."

The World Bank's statistics on inequality in South Africa confirms Subramany's statement on equality; as South Africa has one of the highest inequality rates in the world. With an income Gini ratio that ranges between 0.66 to 0.70, the top decile of the population accounts for 58 percent of the country's income, while the bottom decile accounts for 0.5 percent and the bottom half less than 8 percent.

In similar vein, economist Thomas Piketty, author of Capital in The Twenty-First Century, states that 60 to 65 percent of South Africa's wealth is concentrated in the hands of just 10 percent of the population. He says this group historically has been predominantly white. “So we are still very much with the same structure of racial inequality that we used to have."

Theologian Ndikho Mtshiselwatraces the level of inequality in South Africa to the presence of apartheid colonial social order which the democratic regime unwittingly administers, instead of changing or providing leadership in their destruction.

The inequality in South Africa has led to a system where two decades after the end of apartheid black South African youths face a system of exclusion that hampers their efforts thrive and prosper.

Consequently, South African youths have taken it upon themselves to expose the limitations of transitional arrangements from which the post-apartheid state was constructed. They demand the happy ever after promised to their parents

Finding Biko: The Spirit in the Fallist Movement

On the morning of March 9, 2015, Chumani Maxwele started a poo protest against colonial legacies he and other black students had been forced to live with. Starting with the statue of Cecil Rhodes, the #RhodesMustFall movement condemned the University of Cape Town's celebration of white culture—its eurocentric curriculum, mostly white governing and the institution's weak financial and mental-health support for black students.

Clad in T-shirts bearing the face of Biko, and chanting songs reminiscent of the struggle against apartheid, students across South Africa marched against the announcement of an 8 percent school fee increase in October 2015 under the banner of #FeesMustFall.

Also in the same year, #OpenStellenboschprotested against the use of Afrikaans as the main language at Stellenbosch University. In the documentary Luister, black students testify to their painful experiences of Afrikaans being used on Stellenbosch campus, in residences and in the town to exclude and marginalize them.

Unquestionably, to a keen observer of South Africa's history inherent in the #RhodesMustFall, #FeesMustFall and #OpenStellenbosch fallist movements, this political awakening similar to that found among youths in the Soweto Uprising of June 16, 1976.

This is South Africa's born free generation's way of embracing Biko's philosophy of Black Consciousness which states that "the black man must reject all value systems that seek to make him a foreigner in the country of his birth and reduce his basic human dignity."

“The Black Consciousness philosophy is reappearing in varied and interspersed manifestations," author and critic Perfect Hlongwane tells me. “BC philosophy is seen in the fallist movement traceable to University of Cape Town's #RhodesMustFall struggle by students to remove colonial monuments and edifices Biko often quoted."

He believes the Black Consciousness philosophy was used on campuses across the country to keep main political parties ANC, DA, and the EFF from hijacking the free education project.

“It's about making sure that black people can live freely, with our own love for each other and our differences without whiteness dictating the terms."

Speaking with Dr. Anne Heffernan, a post-doctoral researcher in the History Workshop at the University of Witwatersrand, on the reemergence of Biko's ideology among South African youths, she says:

“Young people today who are disaffected by many of the compromises made by the ANC and its allies, and by the resulting endurance of economic (though not political) racial segregation, are looking to some of the political philosophies that operated in tandem with the ANC's charter during the anti-apartheid struggle for solutions to enduring race-based inequality."

Heffernan further notes that students are reprising and remaking Black Consciousness for their own contexts rather than importing it wholesale from the 1970s and 80s.

“The black consciousness that I have seen articulated on campuses in particular at Wits draws on some of the philosophies that influenced Biko and his contemporaries (Frantz Fanon has been a big intellectual influence), but also on newer theoretical frameworks like Kimberle Crenshaw's concept of intersectionality," Heffernan says.

In addition, the resurgence of student politics has brought with it a renewed political discourse about fashion and culture: “That has some echoes of the 'Black is beautiful' campaign pioneered by Black Conscious activists in the 1970s," she adds.

Biko's spirit continues to empower black South African youths in their struggle against the colonial matrices of power which eluded the making of the post-apartheid state and their quest to restore black pride.

Mandela stated in 2000 that "Freedom alone is still not enough if you lack clean water. Freedom alone is not enough without light to read books at night, without time or access to water to irrigate your farm, without ability to fish to feed your family."

Likewise, Dr. Mamphela Ramphele, re-echoes Mandela's thoughts as she says freedom without dignity, and equality is not enough.

In recognition of the above, black South African youths challenge the unfinished struggles of freedom and decolonization within the university highlighting commodified education and the exploitative labor system brought to the fore by Biko.

As a parting shot, Hlongwane reminds me that all rainbows have no black in it. “So, the youth see the rainbow nation concept as an attempt to relegate the indigenous culture to a rank below that of rampant western/white value systems. And they reject that attempt."

All opinions expressed are of the individual respondents and do not represent the opinion of the institutions they are affiliated with.