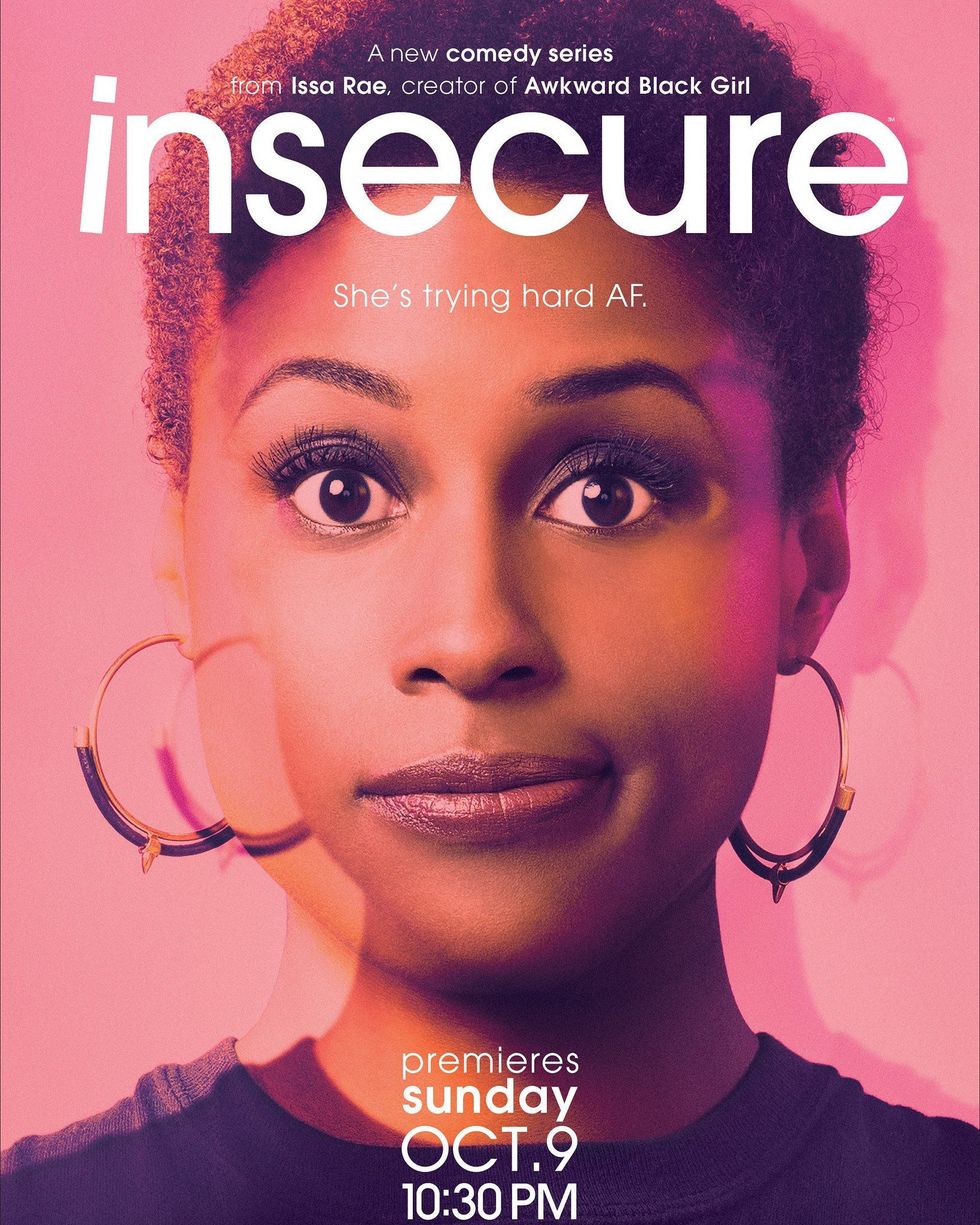 Marking a month almost to the day before Awkward Black Girl creator Issa Rae’s highly anticipated show Insecure is scheduled to air, HBO has unveiled the poster and official trailer.

Thursday, Rae took to Twitter to let her fans know about the drop, sharing what’s behind the name of the show, even getting personal, admitting “sometimes I’m a weak Black woman” (although you wouldn’t know it because she literally glows with confidence).

Why did I call our show #InsecureHBO? Because sometimes I'm a weak black woman. Official trailer drops tomorrow! pic.twitter.com/uas1tnMIMi

What makes the 31-year-old, half-Senegalese creator’s eight-episode series a standout, besides the caption on the movie poster that reads “She’s trying hard AF” is the show’s premise as a “prequel to #BlackGirlMagic.”

As the creator, co-writer and star of the production, Rae recognizes black girls may want to be all the way up, and affirm their black girl magic, but she’s taking a more measured approach, instead focusing on the come up. We’d like to think success or magic is made overnight, but truth is—it all lies in the struggle, those moments when you never thought you would have made it.

A girl is ready AF. #InsecureHBOpic.twitter.com/eBlfgRzyF7

There’s this narrative going around that’s awesome that black women are fierce, they’re strong they’re flawless and I don’t know that life and my friends definitely don’t know that life. So I wanted to center a show around weak black women and the uncertainty that they feel on that journey to get to greatness. It’s like the prequel to BlackGirlMagic.

The trailer offers a glimpse of what’s to come as we follow 29-year-old Issa G (Issa Rae) do some soul searching on whether to continue her relationship with her boyfriend (Jay Ellis of The Game) who is recovering from a professional shortfall. Issa navigates this trial in Los Angeles with the help of her BFF Molly, a corporate attorney looking for love, played by Yvonne Orji, creator of Nigerian-American sitcom pilot First Gen.

And it’s feeling a lot like the ‘90s again with the advent of multidimensional and authentic black stories helmed by black creatives on TV like Donald Glover’s Atlanta on FX and Ava DuVernay’s Queen Sugar on OWN—both premiered this week. Add Insecure to these, and the fall 2016 TV lineup is looking lit AF.

Watch the trailer ahead of the debut of HBO’s Insecure on Oct. 9 at 10:30 p.m. And expect to see more of Rae who recently inked a 2-year production deal with the premium cable network on all its platforms to develop programming, highlighting diverse narratives.