FlexBoogie: "Black Love is Scary Because it Means Black Power" 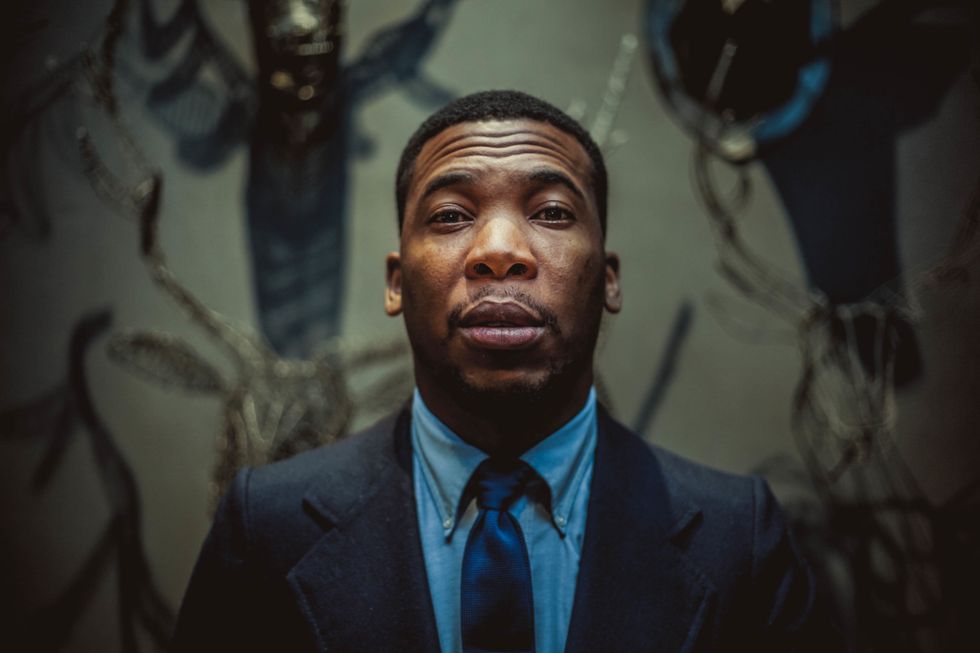 We speak to Hakeem Anderson-Lesolang, aka FlexBoogie, about his book '200 Truths About Love.'

Speaking on his debut book 200 Truths About Love, South African writer, rapper, social activist and entrepreneur, Hakeem Anderson-Lesolang says, "No publishing company took me." He says Pelmo Books put his book out because he had a personal relationship with them, so it was easier for them to understand his vision.

"And now… close to bestseller in five months," he continues. "I pitched it to [every publisher] in the country. But because it wasn't [a book about] black pain, but black love, it's scary. Black love is scary because it means black power. That means people are seeing their self-worth, they are demanding it, they want their time and energy to be compensated properly. And the source of all that is love."

200 Truths About Love, which was years in the making, is a collection of essays and poems by Hakeem with a core focus on black love and self-love. He uses mostly relationships as an entry point.

Before he resorted to his government name, Hakeem Anderson-Lesolang was known, first simply as Hakeem while still part of the Pretoria hip-hop quartet Ba4za. Then, years into his solo career, he became FlexBoogie, when he released his debut solo album Pens and Swords (2008).

About five years ago, he started posting poems and bite size essays on his Facebook profile. Most of these revealed a man who was going through a change of mind state—learning and acknowledging the pain men inflict on women, and understanding that as a black person, there's no need for you to settle for less in any field of your life.

It started with him changing his ways.

He recounts the man he used to be as one who used to—"gaslight the women I was with—breaking hearts basically." "I feel like the way I did it was the worse way. I would start a conversation, knowing it's going to amount to the development of feelings. But as soon as emotion developed, I would ghost the situation."

But being a Muslim man who prays five times a day, he got tired of praying for forgiveness for the same wrongs. "I was just like 'do you like the person you are, and will become? Do you like the story that your name carries?' And I was like 'nah, even if I'm going to hell, I'd rather be known for love—black love. And I didn't want to disappoint my family. So I started to ghost my old self. But I had to deal with everything that I had done. And not just apologizing, but being remedial to it.'

That was a pivotal moment in his life.

He went from being a typical rapper with all the synonymous bravado, and the customary problematic rhymes, to one who carefully considers what he puts down on wax. FlexBoogie's latest EP Pwrs sees him give us his reality—he's a husband and a father trying to be better at both, and stays preaching love in all forms. Sonically, the music is now richer, taking a live approach as opposed to electronically produced beats. He gives props to his band, who have stayed with him even though they went for a very long time without making any money

"Gotta Get Up," his collaborative single with Emtee, his biggest song to date, is a hustler's anthem in which the two artists encourage the spirit of not giving up.

"There are always cringe worthy moments when I listen to where I was at the time­—the things I was proud to say that time," he says of his old music. "Hip-hop is problematic. As a hip-hop artist, you need to be responsible. One day soon, you will have to be accountable for the thoughts you're putting out, the message you're propagating. Very soon a lot of artists are gonna have to account for who they are, the things they have told people­—how they told young men and women to behave.

"So the messages I put out when I was still part of Ba4za and in my collaborations have been problematic, but if you are going to apologize, write a book like 200 Truths and be that message."

This change of mentality has led to the man changing circles.

"All the rap circles that I was in, they fell off," he says. "But I was okay with that, I was like 'God, if this is not good for me, take it away because I don't need things that are harmful to me.' I can point you to, like, only two people from those circles I'm still tight with. Because it's uncomfortable being around a coffee table with Hakeem talking about real shit. Because I'm treating my woman the way I do, you can't talk to me about cheating or partying because I know what we're gonna do when we get there—pick up girls so we can cheat. You can't talk to me about liquor because that slants your mentality and I know what that leads to. So because I'm of this mentality, I will tell you when you are fucked up. And who wants to hear they are fucked up when they are okay with being fucked up?"

But every man who has a Twitter account can talk the talk. Not many walk it, though—we've seen male leaders of movements that are pro-women getting ousted for their trashy behavior offline. We've seen leaders of pro-black movements going against what they theoretically stand for. So how is FlexBoogie different?

Because Black Academies was started in 2013. At first, it was just meant for his own children. "Because I hated what they were being taught in crèche; how they were being taught to hate themselves even," he says. "One day, my daughter came back home with skin and hair issues. And I couldn't justify that, so I started teaching her about beautiful black women, that's when the volume increased in terms of my stance on black consciousness and Because Black being a thing."

At the end of 2013, he bought the crèche he attended as an infant and rebuilt it. Through research, he found institutions that taught Pan African literature and introduced that to Because Black Academies.

"It's a collaborative effort between the teachers and the parents," he says, "so it doesn't stop at crèche. The criterion is parents that are forward thinking."

Knowing that once the kids are done with crèche they will then be part of the toxic education system, through the Because Black Foundation, they are building a primary school, he says.

The man also runs a 200 Truths About Love WhatsApp group where young people, most of who've read his book, share ideas about black love, self-love and just how to be better human beings.

What make him happy is the response for 200 Truths About Love. "I get a lot of calls and inboxes from men who say 'thank you for the book, because it's changed the way I thought about myself, and how I thought about how women should be treated and how I should look at them.'"

He is currently working on an upcoming TV show in which he talks to couples in successful relationships asking them to share how they managed to make it work. He raises the concern of how black love is portrayed as a joke on South African TV, citing shows such as Our Perfect Wedding and Date My Family, which pretty much ridicule black love for ratings.

A new EP is also on the way.