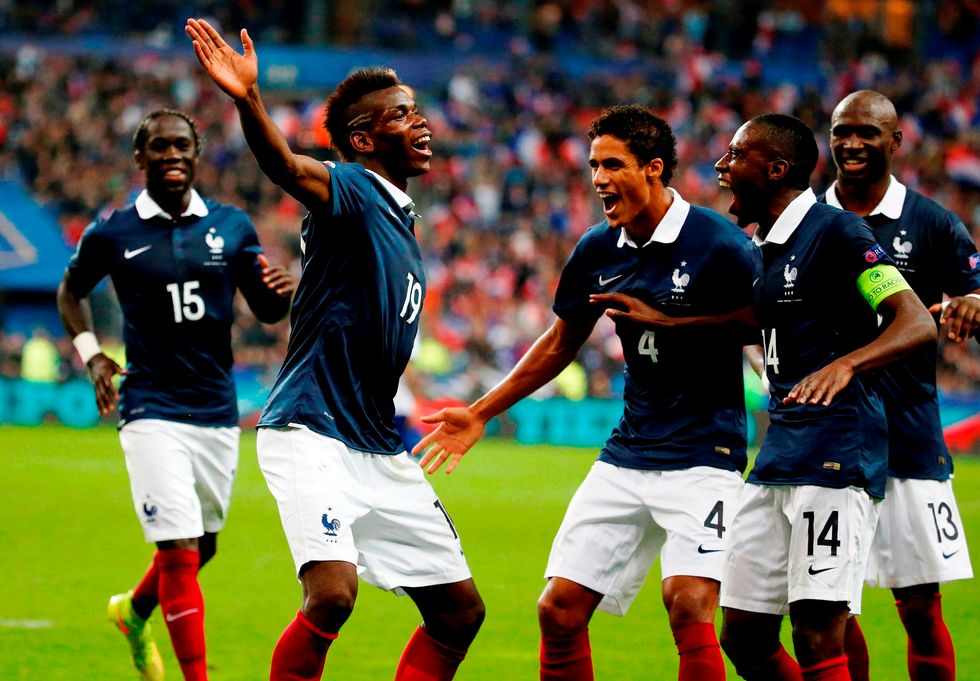 Paul Pogba celebrates after scoring against Portugal during a friendly. Photo: Ajith Kumar (via Flickr/Creative Commons)

The French National Football team has reached its third World Cup final in twenty years. And like when they won it all in 1998, and when they lost in memorable fashion in 2006, their racial makeup seems to be one of the main talking points surrounding them.

In 1998, when France also hosted the tournament, the diverse background of its key players—mainly that of the team's star, Zinedine Zidane, who was born in France to Algerian Berber parents—was used to both celebrate and lament the state of the country as a sort of "melting pot of cultures."

Those who celebrated a team packed with black, Caribbean and Arab players saw its success as proof that France could move forward from its colonial past and into a welcoming, inclusive idea of "Frenchness." Those voices that lamented the same team—mainly heralded by the far-right politician Jean-Marie Le Pen—saw it as a metaphor for fleeting French values, and the disappearance of the "pureness" (or "whiteness") they wanted for France.

In 2006, when France lost the final against Italy in Germany, many narratives focused on Zidane's last act as a professional footballer: A while after scoring a "Panenka" style penalty, he headbutted Italian Marco Materazzi and was sent off from the game. Allegedly, Materazzi had been racially abusing Zidane, and the French captain could not stand it anymore. Although Zidane has never said what did Materazzi say exactly, that final is remembered more for that final act of defiance, than for Italy winning on penalties.

This time around, France has been heralded as one of the most "African" teams in the competition. Many infographics have been circulating on social media pointing out that 15 of the 23 players in the French squad can trace their heritage back to Africa, mainly to former French colonies. This is the case, for example, of World Cup sensation Kylian Mbappé, who was born in Paris to a Cameroonian father and an Algerian mother; and of team center-piece N'Golo Kanté, who was also born in Paris, but to Malian parents.

There is also Samuel Umtiti, the defender who scored the goal that sent France to the final, who was born in Yaoundé, Cameroon. Oftentimes, Raphaël Varane, whose father is from the French Caribbean island of Martinique, is also included on these lists, as further proof of a sort "international blackness" present in the French team.

As French scholar Grégory Pierrot points out, "the black players of France are also black players for the entire black world." And perhaps this focus on France's "Africanness" is a result of all five African teams being eliminated in the group stages, and many fans looking for a new team to support. A way to support one of the most multicultural teams out there.

But of course, this multiculturalism is not the result of mere chance, but rather of France's complicated history. After World War II, France opened its borders to immigrants coming mostly from its former colonial empire as a way to supply the labor shortage and rebuild the nation. These immigrants—who were usually fleeing from local economies destroyed by decades or centuries of colonialism—were reluctantly welcomed in France, often seen as a necessary inconvenience. They had to settle mostly in banlieues, the suburban areas surrounding major cities, that for some in France became synonyms with "dangerous immigrant ghettos."

But for the French Football Federation, these areas became synonymous with untapped football potential. After a series of failures in the 1960 and 1970s, the Federation decided to create a football academy system to develop talent. Many of the academies were located in those same banlieues, where there was enough space and a large talent pool of poor kids trying to get ahead in life. Perhaps the most famous of these academies is Clairefontainte, located in the Paris suburb of the same name.

Both Mbappé and Blaise Matuidi (who was born in Toulouse to Angolan and Congolese parents) trained here and will represent France in the World Cup final this Sunday. But the academy has produced other country's World Cup talents, such as Morocco's Mehdi Benatia and Portugal's Raphaël Guerreiro.

Not only that, France has produced a total 29 players playing for other countries' teams in the tournament. This, coupled with the fact that both the Belgium and England squads—who both reached the semifinals—are also packed with the sons of immigrants, has made this World Cup "a victory for the immigrant dream," as Ishaan Tharoorproclaims in the Washington Post.

But not everyone in France will gladly boast this narrative. Gérard Araud, France's ambassador to the United States, for example, tweeted, in response to claims of France being "the most African team," that "all these players are French born and are as French citizens as I am 2) so what? A problem with the color of their skin? Why do you endorse the narrative of the far-right?"

His fear, echoed through a big part of France, is that the constant signaling of some of the player's "otherness," will reinforce the narrative that they are not completely French. This is not an unfounded fear, as the pushing of that kind of narrative has already happened.

Since at least the 1998 run, the French team has been nicknamed "Black-Blanc-Beur." This is a pun of the bleu-blanc-rouge of the French flag that points out the "Black-White-Arab" composition of the team. But while some saw this as a celebration of the country's diversity, the far-right used it as an insult towards those players who are not considered "French" enough, those whose identities come from somewhere else and might never become fully French.

Le Pen, for example, said in 1998: "I find it's a bit artificial to make these players come from abroad and to baptize them as the French team." He also complained constantly that those players did not sing the national anthem with the gusto seen performed by the players from more homogeneous nation, as proof that they could never be considered French properly.

Still, France, "the most African team," will take the field this Sunday against Croatia to play for their second World Cup title. And despite the animosity towards the black-beure players on the team, they will be, for at least 90 minutes (and very likely 120), what the world thinks of when they think about France.