Gaika's Dark Dancehall Is A Force To Be Reckoned With 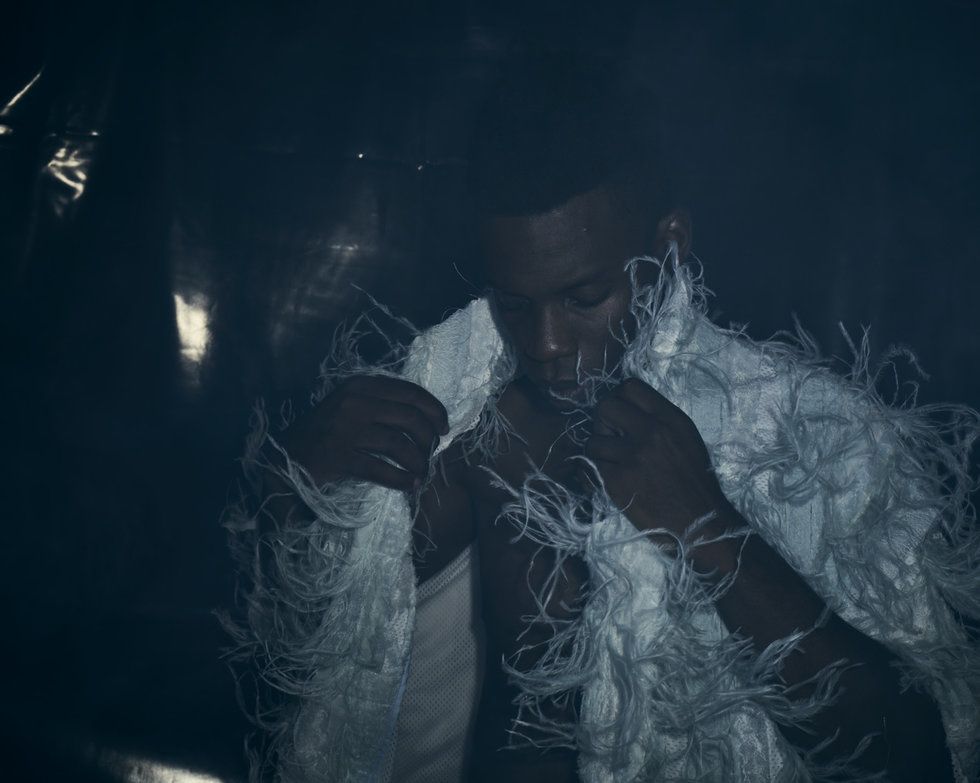 We chat to the buzzing UK-based artist while he's in South Africa.

The last time Gaika was in South Africa, he was a toddler. His father, a political activist and scientist, got a job in the country in 1994. "So I used to visit," says the UK-based artist as he prepares for soundcheck at Kitcheners in Braamfontein, Joburg, for his show happening later on in the night. "I'm looking forward to it," he says of the performance. He's performing in Cape Town the next day, and Lilongwe, Malawi the day after.

Him, a leftfield artist, traveling to South Africa is due to how efficient the internet is for artists. "I travel a lot," he says, "And, almost everywhere I go, there seems to be a small room full of people who want to listen to my music. And I don't entirely know why."

The day before, Gaika was part of a panel alongside South African electronic music duo Kajama. The artists shared the challenges and triumphs of being musicians on the fringes of the mainstream.

During the session, Gaika revealed he was happy with his trajectory. He's okay with not being on the charts alongside Ed Sheeran. He shares with fellow musicians in the audience that searching for a deal is a waste of time. "Most of the time, what you are looking for is within your circle of friends," he says, encouraging the idea that as an up-and-coming artist, get your friends with the skillsets you don't have, to assist you.

Sitting here with me is a regular dude, far from the surreal character draped in paint and oil on the video for his 2015 single "Blasphemer," which was discussed for a few minutes during the session the day before.

"It's funny to me," he says. "When people meet me, they expect me to be this angry, dark person. I just don't think that skull and bones are the most terrifying thing in the world. If you can ask what I would imagine what hell would be like, it's a long room where everything is shiny plastic, and it doesn't end and there's nothing else in it. For me, it's not fire or skeletons, I could go deeper into it."

He tells me a reasonable number of people consider his work dark and political. "It's just what I like," he says. "It's not darkness to me. It's just my aesthetic, it's what I like. I like stuff to be subversive. Stuff that feels gothic or dark to other people just feels normal to me."

"Blasphemer" is the definitive Gaika—subtly political and direct lyrically. But to him, being political and questioning the status quo are second nature. It comes from being raised in a politically-aware family, as much as they're Christian they encouraged open-mindedness.

Which also bleeds into the music he makes. It's difficult to categorize it—it has traces of dancehall, garage, hip-hop and electro. And he produces it himself, of course with the aid of other musicians.

"I'm the old school type," he says of his approach to production. "I believe in putting people who are best for the job on the job. So for instance, drums are not my strength—I'm more on the vocals and overall arrangement and all that topline stuff. I come from a visual background, so when you are directing film I make records the same way. I can kind of hear what I want to do. But more often than not, it's a combination of different things."

His vocals, which are usually drenched in effects, are delivered in a Caribbean accent, which Gaika doesn't speak in, even though he has Caribbean roots. "It's not a conscious thing… I can't explain it," he says of the accent he adopts when singing. "That's just what comes out when I sing."

For his performance, later in the night, he comes out looking like a modern samurai dressed in all black: black jacket, black tee, and black track pants. He finishes his look with a pair of black Nike Air Force 1 HIs.5h33d

The crowd has just been warmed up by an outstanding performance from Kajama. Gaika takes the audience to another high. His beats knock hard and his vocals are as surreal live, enhanced with some reverb on his mic.

He goes through his catalog, performing songs from SECURITY and Spaghetto. And, just like with his music and ideologies, it's all natural.

The artists says he wants to travel to more countries in the continent. "I really wanna go to West Africa—Ghana, Nigeria," he says. "And of course the Ivory Coast, Uganda… there's a lot of music coming out from there. People are starting to be honest about their relationship with dancehall particularly Nigeria. Nigerian musician has been highly influenced by dancehall, but it was pretending it wasn't."

I ask him if he's working on any collaborations while in South Africa. He's not so sure. "I'm going to meet Petite Noir just now," he says. They recently exchanged contacts, and might work on some music.

When it happens, you'll be the first to know.