A Buzzing Trap Scene Has Emerged in Ghana, and This Producer Is at the Forefront 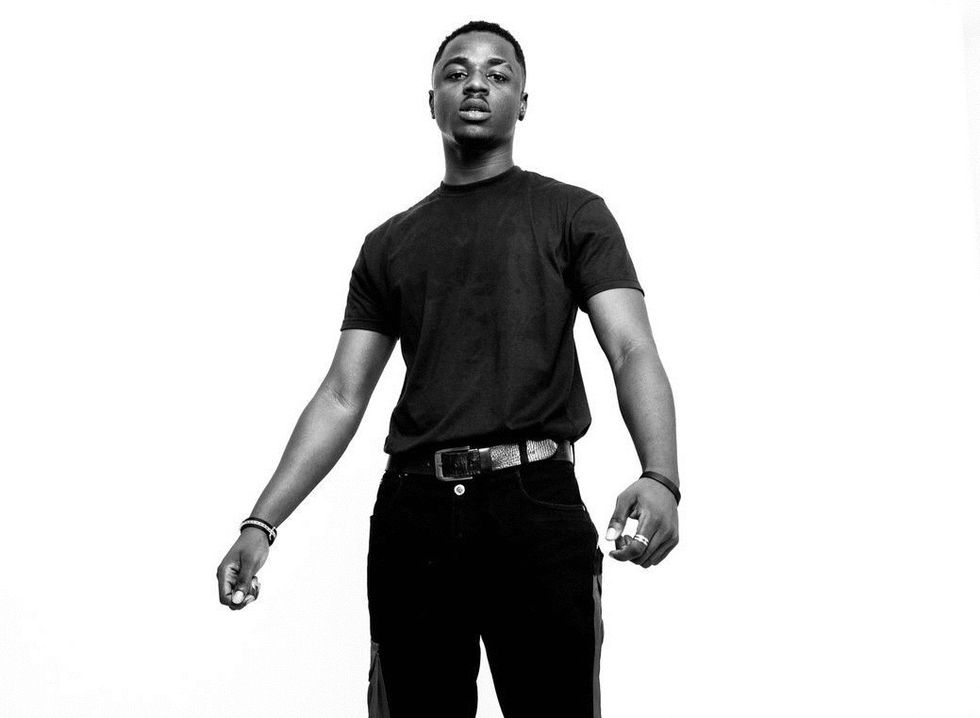 Nxwrth. Photo courtesy of the artist.

We look into the fast rise of trap in Ghana through the eyes of a key player, producer Nxwrth.

Hip-hop isn't new to the West African country of Ghana, as several of its veteran rappers like Obrafour, Reggie Rockstone, Tinny, and Tic Tac have been holding it down from as way back as the early '80s.

Trap, on the other hand, a sub-genre of hip-hop developed in Southern USA in the late 1990s to early 2000s, has been popularized in Ghana by several emerging musicians and their fans, over as recent as the past one to two years. There's a growing trap scene in Ghana, and it has quickly developed a cult following.

If you go to a Ghanaian hip-hop show, you'll witness a number of young music lovers surrounding the stage, eyes all trained in the same direction, reciting lyrics word for word, and jumping up and down in perfect sync with the artists. Whoever is performing is likely to have his peers right there with him, in posse style, doing the same exact thing a few feet above. It's a ritual of sorts, where no one is a spectator and everyone is a participant. The DJ cuts off the music for a few seconds, and you hear the roaring sound of familiar rap lines thundering in the air. It's in moments like these where you realize just how much of an impact this kind of music has had on these individuals, and exactly how far gone they are for it.

That dedicated fandom doesn't just end at concerts. It becomes a part of fans' lifestyle. The fashion of their favorite artists becomes a template for their own, slang and catchphrases used in the music become commonplace in their own vocabulary, and become hashtags put to regular use on their social media posts. The passion of these fans has given rise to a niche industry, where the players are constantly working hard to satisfy in return for an amazing level of loyalty and support.

Several artists in Ghana have succeeded in turning the style of hip-hop into a movement, such as the likes of Akan, Kirani AYAT, Kwesi Arthur, B4Bonah, Ko-Jo Cue & Shaker, Teephlow, BRYAN THE MENSAH, and more particularly members of the popular La Meme Gang music supergroup (artists Darkovibes, $pacely, KwakuBs, Kiddblack, RJZ, and producers Kuvie and Nxwrth), who are fan favorites. They've taken it upon themselves to make trap music that satiates the desire of their fans for something new to vibe with at home and on nights out, and feeds the urge of the creators to express themselves using their favorite adrenaline-pumping art form.

At the forefront of this movement is record producer, DJ, and artist Ahmed Froko, popularly known as Nxwrth (pronounced North). Nxwrth, a key member of the La Meme Gang music supergroup, is one of the Ghana trap scene's foremost producers. He's managed to stand out among the pack, scoring a number of hits with his productions for mainstream rapper Joey B as well as several fan favorite up-and-coming artists. He's proficient in his craft, and his love for the outer space shows in the atmospheric soundscape of his productions. He pushes the envelope with his music each time, with no two songs sounding alike.

We spoke with him about the Ghana trap scene, as well as his own music. Read our conversation below.

As a producer, you could make any kind of music. What made you decide to specialize in trap?

Trap was one of the many genres I was strongly into because of my love for Travis Scott, Wongadurl, and Mike Dean. I wouldn't particularly say I specialize in trap, but I know my 808s are brazy and I have a special ear for kick patterns. It's my stronghold, but I'm evolving.

Who and what else are you influenced by?

I'm a space fanatic, the beauty of space inspires the creativity in my beats. I listen to a whole lot, and I'm influenced by so much, all the way from Beethoven and Mozart down to Murda Beatz right now. My influences cut across from blues to punk. Calvin Harris, Daft Punk, Kanye West, Mike Dean, and 40.

You're one of the few producers making waves with trap in Ghana. What do you think are the things that played a part in making that happen?

I'm a huge trap head and that's a major factor. I really love trap music, sometimes I start my day with trap music. But I'll say it's God really because there's a number of people doing what I'm doing. So for me to stand out, I know it's God's plan. And I've wanted trap to reign in Ghana since like forever, I'm just happy I'm contributing to it, vibes soor vibes soorni [catchphrase alert!].

Why do you think trap began to resonate so well with fans in Ghana in recent times?

Growing up, crunk music was crazy down here. I just feel like trap music wasn't that exposed to the Ghanaian community so much. Like afrobeats and highlife is the shit here, but La Meme Gang and myself brought that [trap music] into the light. I feel like it's music, every genre should be given the opportunity down here.

Do you feel like there should be more producers making hip-hop and trap in Ghana and West Africa?

Yes, definitely yes. The West African hip-hop culture is mad lit, I mean if you listen to the kind of music we make, the lyrical content and production, we have something going on here. The Westerners and Europeans shouldn't be the only ones doing dope shit.

You and your peers, the rest of the emerging acts in Ghana work very hard, steadily releasing songs, projects, videos, doing shows, etc. Why's that?

There's no system. So if you don't keep your head up, it's game over. And we find ourselves in a place where we're not generally accepted, so we gotta work overtime to make this shit happen. I'm on a mission to change the soundscape in Ghana. Even though there's no system, I'll still do it.

Tell us how about your song with Joey B, "Ranger" happened.

Joey B is the big bro, love him sooo much. We work in the same studio, Villian Sounds. That's where I met him. When I hit him with the Ranger beat, his EP was already done. I also hit him with the concept from the Sunshine video, to shoot the whole cowboy vibe.

Is there anyone you'd like to work with that you haven't already?

Locally I'm looking at sitting in the studio with Wizkid. Foreign, Travis Scott!

"Cupid" by Darkovibes! It's a masterpiece. I love that song so much.

What do you intend to achieve with what you're doing, in the short term and the long term?

You can keep up with Nxwrth on Twitter and SoundCloud.