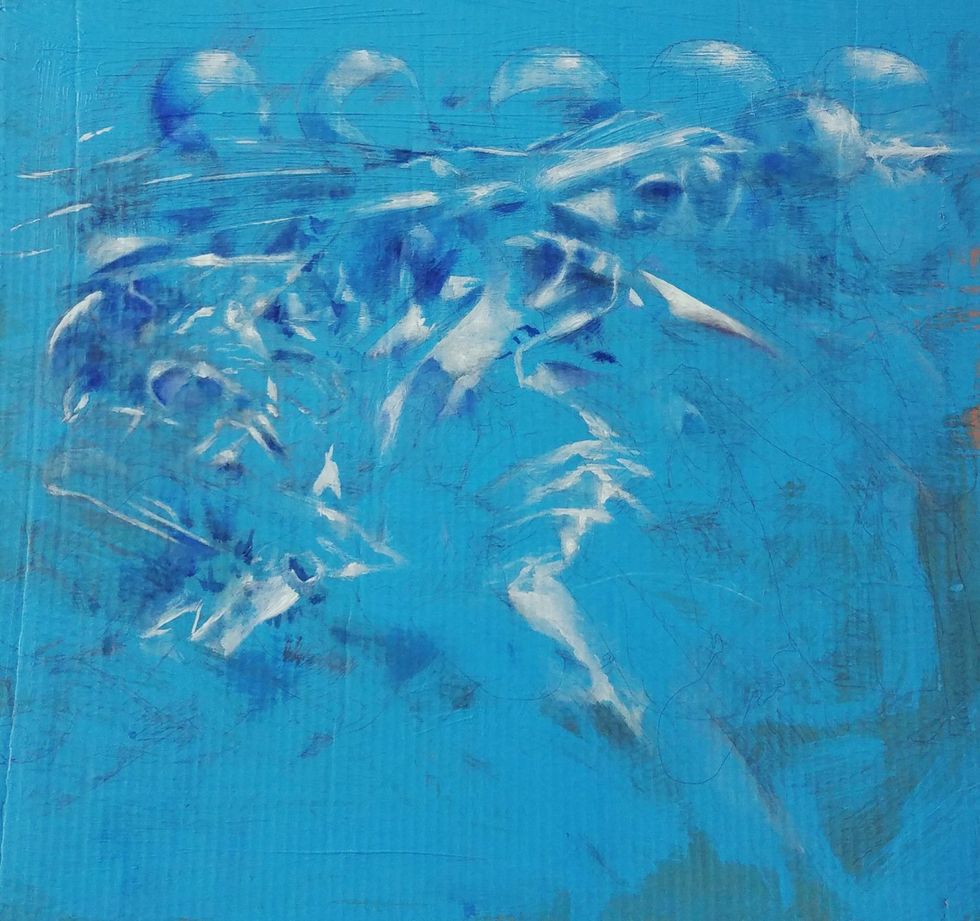 In conversation with Ghanaian-American artist, Akwetey Orraca-Tetteh on his multimedia exhibition, "BLUE STEAL."

It’s mid-morning on a Friday, where multidisciplinary artist Akwetey Orraca-Tetteh, known to many as “AK,” is frantically looking for legal parking, because we all know the parking signs in Williamsburg, Brooklyn are enemies of progress. He’s also one of the frontmen of Dragons of Zynth alongside his twin brother, Aku—the indie band gained critical acclaim from the likes of TV on the Radio in the early 2000s.

He walks down the sidewalk to the OkayAfrica offices wearing a headband made of blue and golden yellow patterned wax print around his head, with an off-white bomber jacket trimmed with blue on the cuffs. This was the one moment where I could get a look at his eyes, for he put his black rimmed, opaque sunglasses on as he sat in our naturally lit office before we began our conversation on his new exhibition in Okay Space.

On Tuesday, May 2, Orraca-Tetteh shares with us BLUE STEAL, a multimedia exhibition of new works drawn from a chapter of his existential narrative, The Birth of Tiro, where he intersects his performative and studio practices introducing a futurist tale of liberty and theft.

“My artistic background is informed and influenced by experientiality and both in study and practice of performance,” he says.

Presented by Okay Space and in collaboration with Black Swan Projekt, BLUE STEAL is a glimpse of Orraca-Tetteh’s exploration into the “psycho-surrealities” of American digital consciousness via visual representations that make you feel you’re in virtual reality, illuminated by neon lights.

With a background in mythology, philosophy and technology, he’s attracted to the points at which ancestral, cultural and digital memories collide, enter and abstract the social organization of post-modern visual language. His character, Tiro, is his existential realm where he could fully engage his artistic insight.

BLUE STEAL runs until June 1. Take a look at our conversation with Orraca-Tetteh, where we dig deeper into BLUE STEAL, his thoughts on Afrofuturism and more below.

Antoinette Isama for OkayAfrica: Who is Tiro and how were you able to develop the character?

Akwetey Orraca-Tetteh: By the time I was finishing my thesis in art school I came upon the realization that to really embrace oneself and the assent of what it means to live an artist's life. I think I was around 21 years old when I fell into an existential performance piece where I was inhabiting a lot of the inherent qualities within us that we aspire to. What I mean by that is, a lot of times we find we have strengths, characteristics about us and we're also very much aware of our vulnerabilities and weaknesses.

Tiro was a nickname of mine from childhood that my father gave me. Mr. T was one of the first icons that I really took to because he represented power, but he also represented a very fun kindred spirit. He's very much about waking up the children to the idea of how they can represent themselves. So Tiro, that's his original name, became a nickname for me and then gradually when I fell more into the realm of character, almost in the sense of the way that (I'm an 80s baby) Crazy Legs calls himself "Crazy Legs." At the time of embodying this character, then it became very much about what aspects of the character, what are the attributes, what's the origin story. At the time I was creating the origin story, so I had the opportunity to create my own wardrobe so to speak. So thinking a lot of in the lines of representations of identity and power, having a very profound understanding of my growth as a Ghanaian person and an American.

I'd been wearing a lot of black and silver at the time, so those became the adoptive colors representing two of the key profound bases for the character's creation. In thinking about the color of black representationally in regards to how we think of power; or the idea of silver in the way we think of electricity, [the way] we think of metal, the way we think of natural elements.

I took on the full embrace of this character and maybe about a week before graduation I met director David O. Russell. He was giving a talk and at the time, when you take such liberal choices, existential choices, you take on the persona of another idea. You become free to engage with the world, whereas you might not otherwise. So he gave a Q&A [and] in full character, I'm not sure to what effect I made a joke, I think I might have broached I guess you'd say, what would be considered to be "church language."

I think I brought to light some more subversive tendencies with it as well. The whole room kind of erupted into some kind of laughter. You know when you're in a room with a bunch of people and somebody makes a joke and tension kind of breaks? His assistant came up to me after the talk and essentially invited me to come out to Hollywood and work with him; reading scripts and doing coverage. Being in full character at the time and not really retreating back into my normal existence I went out to Hollywood as Tiro. What I found from that experience was that it was very intriguing, but I perhaps felt that the concept or the narrative embodiment of what the story could be was better served perhaps through other means.

What is a main takeaway you want for people to get from BLUE STEAL?

In a lot of ways, I would love to consider it as by means of giving. If there's something I could potentially give to anyone coming to the show, in clear recognition of the kind of toxic times that we're living in, I would definitely want them to be present to existing realities that we all share. Perhaps a means of engaging with both the deep, inner turmoils that maybe don't have the opportunity to be collectivized in public spaces.

When I think of BLUE STEAL as kind of a clearing call, I think of the two words paring themselves in the way that we consider say, blue, as a concept of liberty, our concept of freedom, our concept of the earth, or purity as in pure water. And steal, as in the theft of those things, representation and considering that everyone's idea of liberty might be different than the other's. Thereby, complicating the relationship between theft and liberty.

For example, whose president is yours, whose president is mine, whose president is ours—within the context of feeling as though one's belief systems have been robbed from them. Whereas, other people might be cemented in their foundations by these same belief systems. I'm really kind of hoping to give people a glimpse into the ways in which those of the Diaspora, those of African descent, especially in America, those who have existed for decades even with a very very sharp eye and spiritual awakening to the complexities of American life.

Definitely now, there seems to be a more blanket awakening and “wokeness” among peoples of all different types. In thinking about the future, and I think it was the artist Marilyn Minter who said, and I'm paraphrasing, that those who have the heart that is most beaten down are the most free to engage with the new world. So in a lot of ways I feel like collectively America has been a beaten heart. Now we're entering a space where we can potentially wake up after a sundown—in the ways that art can light some of those cataclysmic experiences. I feel BLUE STEAL lends itself to that in some way I hope.

Would you consider your work to exist in the Afrofuturist space?

In the context of Africa being the cradle of civilization, one could then argue that existentially the present time and always moving forward is in direct correlation to what we consider to be a starting point—the hub that is the continent of Africa.

When I think of the idea of Afrofuturism, I would naturally tend to believe that we're just generally talking about futurism as a whole. Sometimes I tend to struggle with the term, but I think that the term definitely has power for recognizing the non-monolithic status of the black intellectual thought, of black excellence, of black life. So in that way, I'm definitely a strong proponent of the concept.

I would be more drawn to a term that could reflect the ways in which people of the Diaspora are responding to evolving from existing within the complex nature of Western life or life within digital culture, generally speaking.

Who do you create Tiro and BLUE STEAL for?

I'm employing tools that I've gained to really share this kind of idea of what a mythical life can be as created by one’s own inspirations. I see that 9-year-old child who one day wants to grow up and be a mega director of action movies and create his own 3-D animations and virtual reality and share his story with the world. I want to exemplify that for other people, for young people especially, so that they won't be afraid of really using whatever tools that they have.

Take a look at the chapter, BLUE STEAL, below:

Blue Steal, as many would later come to find out, was the psychoactive substance of The Resistance, secretly planted among many to distort visions of truth. With the power to suspend time, conceal actions, and move oceans, ne'er were there more a vessel of its far reach. The imbalance of the world was at full tilt and many were in despair. With much at stake it was then up to a few to gather, uncloak, honor and emulate the true harmonic power underlying Blue Steal's viral grasp.

Tiro lifted the vitrine to grab his helmet, syncing this new intel with his visor inputs.

"The Ultramericans will have to convene," he said. "Lawrence, pull up the registry and call Mr. Keats.”

As Tiro's trusted assistant located the poet's quant files, our hero began to write a poem of his own.

Bent by the seams

Of light and true wonder

Lest not we shutter

Whose name yet screams,

"No door, no dinner

No fight, no lunch

No floor, no filter

No life, no punch"

sent by the dreams

Of night and blue thunder

too woven to steal.”

"Lawrence, what do you think? Is it good?", Tiro uttered.

"Well Sir, as you have said repeatedly since we met it is not a matter of bad or good, but how hard we refine.

"Yes, that is word Lawrence, you will do well here. Now. Please. Ask John before we speak what he thinks of the election."

"He's online and is already responding sir. He says he's written a poem about the election--he wants you to read it."

Tiro put his helmet on wiggling for a comfortable fit.

The north cannot undo them,

With a sleety whistle through them;

Nor frozen thawings glue them

From budding at the prime.

But with a sweet forgetting,

They stay their crystal fretting,

About the frozen time.

Ah! would 'twere so with many

A gentle girl and boy!

But were there ever any

Writhed not at passed joy?

To know the change and feel it,

When there is none to heal it,

Nor numbed sense to steal it,

Was never said in rhyme.