'Fire at Sea' Director Gianfranco Rosi on the Defeat Facing Europe and the U.S. 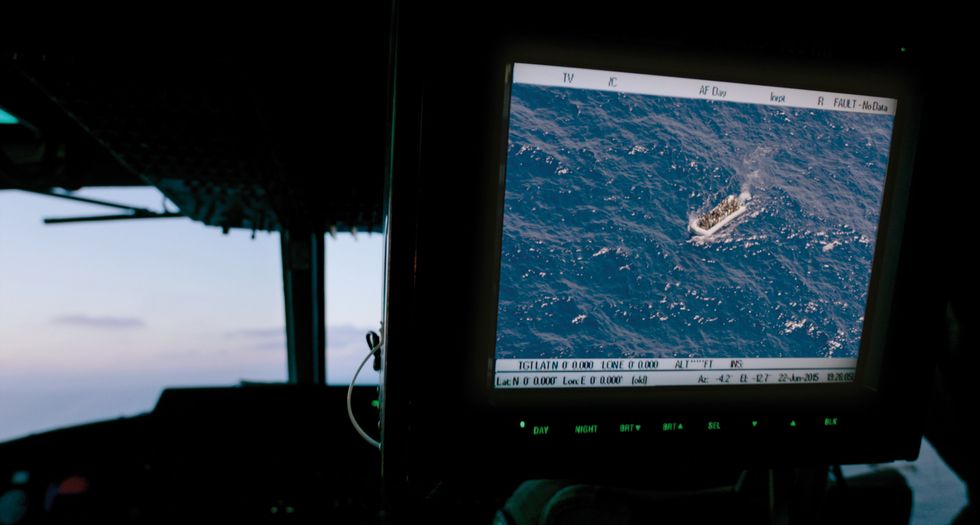 In the wake of the U.S. presidential election, the prolific Italian filmmaker Gianfranco Rosi speaks on the crisis facing Europe and the U.S.

On the 8th of November, the U.S. followed Brexit Britain in turning its back, officially, on the rest of the world. Whether or not Donald Trump’s wall will be built, the implications and repercussions of his victory are damning.

I spoke with the prolific Italian filmmaker Gianfranco Rosi over the phone a few days after the disastrous U.S. presidential election result. Rosi’s latest film, Fire at Sea, is not only the most visually spectacular documentary of the year and a likely Best Foreign Language Oscar contender, it’s also an incredibly poignant look at Europe’s migration crisis. Although, to be clear, it’s not actually about Europe’s migration crisis.

Instead, the Eritrean-born director points his lens at the everyday people that inhabit the infamous Italian island of Lampedusa, a place synonymous with tragedy as the primary point of entry for African refugees making the perilous journey across the Mediterranean Sea to Europe. Rosi focuses on the mundane routines of two islanders in particular: Samuele, a 12-year-old boy who’s essentially Bart Simpson personified, and Dr. Pietro Bartolo, the island’s lone physician who’s been treating Lampedusa’s Italian citizens and migrants for the last 30 years.

The film begins, somberly, with a statistic about the crisis in the Mediterranean: “In the past 20 years 400,000 migrants have landed on Lampedusa in the attempt to cross the Strait of Sicily to reach Europe. It’s estimated 15,000 people have died.”

That startling number is the film’s only direct mention of the tragedy on Europe’s doorstep. Rosi’s camera does catch a few glimpses of the migrants—in one particularly difficult scene, the viewer is taken on board a rescue boat as members of the Italian coast guard attempt, and fail, to save the people aboard a sinking vessel—but the crisis is never actually discussed. Instead, it looms throughout the film’s entire 108-minute running time.

In the conversation below, the Fire at Sea director discusses the migration crisis that’s taken on a new relevance in the U.S. in the wake of Trump’s deeply unsettling presidential victory.

I don’t like this association. Talking about migration is such a huge, enormous thing. I would have to write a book of 400 pages to go deep into it. So I don’t consider it to be a migration film. I consider it to be a cry of help. My film brings attention to the fact that 55,000 people dying crossing the sea on the journey of hope between Africa and Lampedusa doesn’t make sense. I wanted to create awareness to the fact that people cannot die in such a tragic way crossing the sea in order to reach freedom while escaping from all kinds of tragedy, from economic disaster—from wars, from poverty.

I consider my film to be more a film about the island of Lampedusa, and the people living on this island, that represent a very incredible opening towards migration. It’s the only place in the world that never created any barriers, never created any walls. For more than 20 years more than 500,000 people passed through Lampedusa, and nobody even mentions Lampedusa anywhere in the news besides when there are moments of tragedy and death. But Lampedusa’s been welcoming people for more than 20 years, and opening up without ever thinking to build up a wall or to say they don’t want these people here.

I wanted to make more of an emotional film than a film that gives answers. I wanted the film to open up certain questions. You know, there’s a moment in the film where there is a cry for help, and people say “Please, please, please,” and the guy from the coast guard says “What is your coordinates? What is your position?” in a very pidgin English. I would like people to ask themselves “What is my position towards this tragedy?” That’s what I want the film to be, more than a film about migration. It’s such a huge, huge, huge complicated issue that I don’t think I can even answer. And I didn’t want to give an answer on that.

What sparked your interest in Lampedusa?

I wanted to shift the focus on the island of Lampedusa and the people of Lampedusa, and through the people that I met there to give background on this world—that there’s constantly people passing by from the island, but there are two different worlds that never connect to each other. So my question, when I was there, is how on an island so small, people can never meet. Lampedusa became a metaphor for what Europe is in this moment—two worlds that never connect. They barely touch each other and they never connect.

And this happened because four or five years ago, the border of Lampedusa was pushed in the middle of the sea, and the boats are intercepted in the middle of the sea. So since four or five years, the boats arriving from Africa, they never arrive on the shore. Which, years ago, it allowed an interaction between the population of Lampedusa and the migrants. Now [the migrants] are brought by the military and by the coast guard. And it created this enormous separation between the people of the island and the migrants. Lampedusa became a microcosm of what Europe is and what the rest of the world is—the separation between these two worlds. They never really interact.

Did your own background play a role in the making of this film?

My background is a citizen of the world. I’ve been living in many different countries all my life. I was born in Eritrea, I left when I was very young. People ask me if I’m a migrant myself—I’m not, because I had a lot of privilege at the time. These people, they really live with nothing. But definitely, there’s a connection for me. I was born in Africa, and there’s a connection to that land. And of course, when I saw this boat with a group of people arriving from Eritrea, from Somalia, there was an incredible connection there.

This election in the States, it scares me so much because this is a problem that has to be opened up to the whole world. The whole world should be sitting together and trying to relate, to try to understand the solution, that enough people are constantly dying. Just a few weeks ago, another three, four-hundred people died in the middle of the sea. Every day there’s a tragedy there. When we talk about 72,000 people dying on this journey, it’s a human slaughter. We’re all responsible. The whole world should sit down and intervene. The only way to save this tragedy is to create a humanitarian bridge between Europe and Libya and not let these [people’s lives] be in the hands of criminals, in the hands of human traffickers. A humanitarian bridge would be the only thing that could possibly save this incredible tragedy.

Still from Fire at Sea. Courtesy of Kino Lorber.

Being in the U.S. this week in particular—this has been an absolutely horrific week—are you noticing any similarities between the crisis in Europe and in America right now?

Well, yes. I feel that America, like Europe, is building up walls in this moment. What scares me most is the mental wall that people have, the fear that people are right now addressing and thinking that barriers will help this problem. It’s not just happening with Brexit—migration was one of the biggest issues of fear—and having Britain detach itself from Europe because of the fear of migration, the same way people voted for Trump [because of] the fear of migration. But what scares me most, more than physical barriers, it’s the mental barriers.

There are millions of people moving around, which was always happening. And now suddenly, there’s this incapability of politics to accept the fact that there are millions of people moving around the world. The answer is not a barrier. The answer is not urging walls or barricades. The same way people die in the sea, here, people die in the desert. Thousands of people die trying to cross the desert between the United States and Mexico. It’s another tragedy, that again, only politics can save. But certainly not the politics that people have chosen this moment in the States. It’s another huge defeat that we are facing.

Find out more information on upcoming screenings and theatrical dates for 'Fire at Sea' via Kino Lorber.