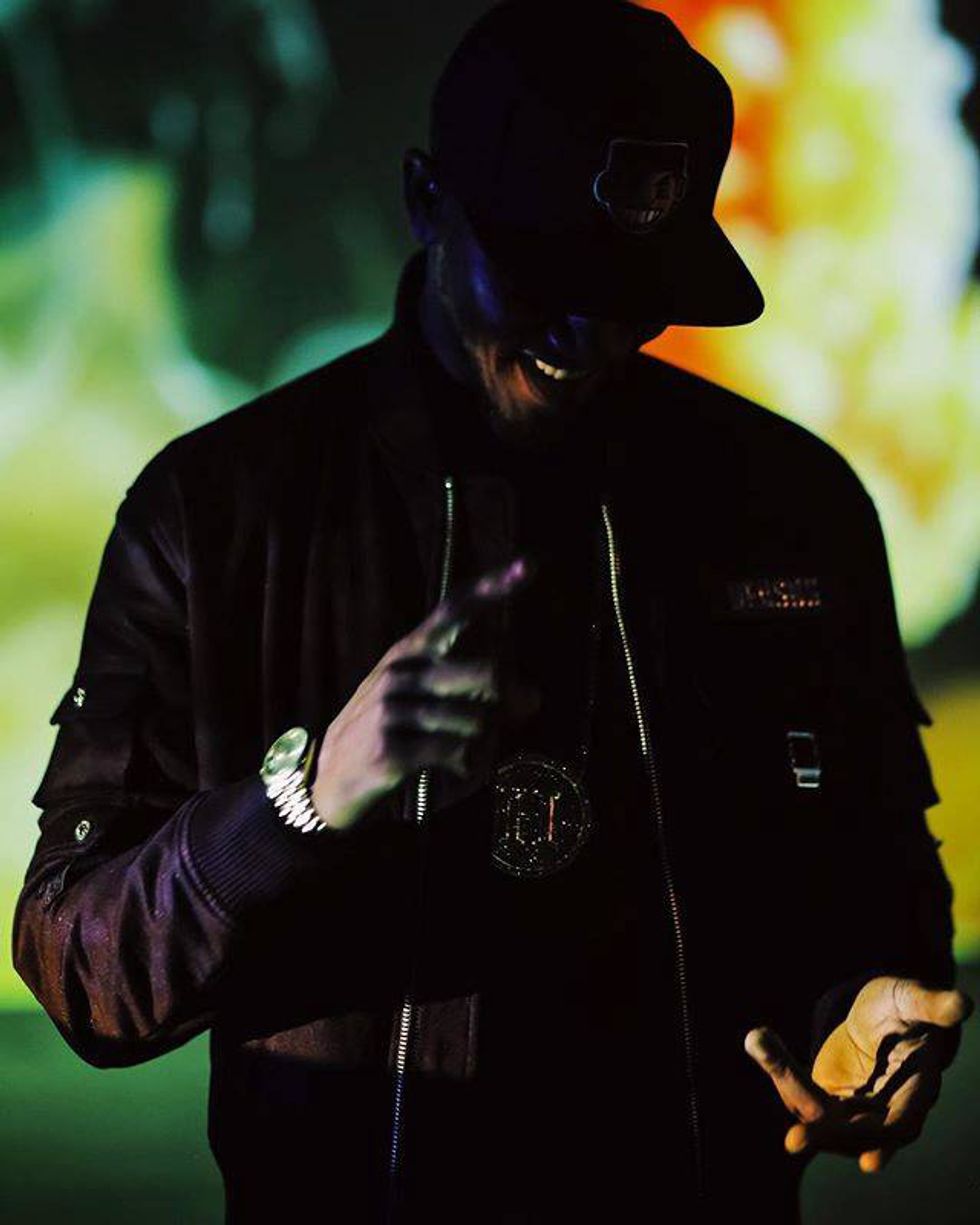 Giggs is the chief absurdist of British rap and grime.

This was made most evident on "KMT," one of two guest features on Drake's world conquering More Life for which Giggs was roundly and wrongly criticised—mainly for many American listener's lack of knowledge of his "Batman / da na na na na" reference.

Also lamped was his line "Whipping that white girl, cooking that Cersei," which is no more outlandish than any other rapper who's used "white girl" as sland for cocaine.

Of the 13 songs that make up Giggs' new release, Wamp 2 Dem, six have no guest features. These six songs are variations of one another in character and content, typified by beats that are slow, stark and menacing. No two are by the same producer.

Each entry is perfectly suited to Giggs' tough talk and OG wisdom, delivered in a rich baritone which would make him sound monotonous if he didn't vary it with flow patterns and intensity.

"Gully Niggaz," "The Essence," "50 Cali" and "Ruler" are bar-fests over menacing beats essentially about street lore. The first two are co-produced by Cool & Dre and 808. The second by Zaytoven who's made hits for Migos, Gucci Mane and Future amongst others.

These well regarded American producers signify the bump in Gigg's profile since being featured on Drake's "More Life," and on two songs for that matter.

That's not to say that these imports are significantly different in template from those which Gigg's previously used, like on the majority of his previous album Landlord, which debuted at number 2 on the British charts last year.

Titling a song as "The Essence" raises expectations that are rarely ever met. Much less so when the writing could easily be dismissed as lacking as is the case in the second half of the song:

Rather than being a result of inattentive writing, it could simply be that in Giggs, musicality is prioritised over literal meaning.

Some of his similes are no doubt inelegant with no excuses to be made for them: "a man's just pussy like a black cat" and all this uncertainty and inelegance bannered under the grandness of the word "Essence" only exposes any weakness in his writing.

"Moist Pussy" is a problematic song. Only six out of 48 lines do not have the word "pussy" in them and it's mentioned 61 times in total.

On "Horror Movie", the word "pussy" is substituted for "man" and used as a leitmotif throughout the song, so that it becomes the hook on which it hangs, especially since it doesn't have a chorus.

The last couplet and outro on "Straight Lifestyle" may explain Giggs' rhyme scheme—even when it could have been staged.

"Then we quick linked up Brenda, Madeline and Marcy / hammer the courvoisier, straddling…"

At which point he breaks off laughing as he completes the bar with a word that rhymes with "Marcy" but is hard to pick out, further proving that Giggs' knack is less concerned with narrative coherence than it is with inducing a feeling—whether stark or menacing. He excels at this time and again, especially when added to his exaggerated bars rapped over steely beats.

Young Thug and Lil Duke add more life to "Gangsters & Dancers" with a chorus and verse that's full of play and zest, leaving Giggs with just a verse to deliver, which he does with gusto.

The second standout song here, "Outsiders," is produced by Footsie, who may have drawn the restless electronics from Drake's "Hotline Bling" to make his own confection, adding one drop guitar licks and thumping bass. It makes for a dope beat, made better first by Giggs, who rides in with tough talk and growl, while Footsie keeps up the pace with his own solid verse, leaving it to D Double E to round well with a snarly delivery which would have been sufficient without the bleak humour: "man a go Brexit on them, pull out the ting".

2 Chainz's delivery on "Ultimate Gangsta" may be a little sedate but in writing he's generally every bit as absurd as Giggs could be.

The cluttered percussion Fanatix has used to make "Time Talking" isn't too different from that which Dr Dre used for Stat Quo's "Here We Go," which Giggs reworked into "Talking The Hardest"—his first and most well known hit. Popcaan's dancehall growl adds real texture and is what takes the song in new sonic directions.

Not just a hook man for higher, Donae'o also produced "Linguo" here as he did "Lock Doh" from Giggs' 2016 album "Landlord." A big swinging synth is centered by unshowy percussion, making the most dance-ready song on Wamp 2 Dem, which is made even more memorable by Donae'o's big chorus.

With even more fans now paying attention, many may now realise that what they mistook for weak writing on "KMT" is actually a type of absurdism that may be unique to Giggs and his psyche.

Rick Ross's own overblown language: "I'm selling dope, straight off on my Iphone" or the even more preposterous "I think i'm Big Meech, Larry Hoover / whipping work, hallelujah" from "Blowing Money Fast" were ridiculed and not only because of his past as a parole officer—all of which has passed on into accepted hip-hop lore and been copied by many.

Giggs' past brushes with the law are not up for debate and his particular manner with language may well be absorbed into rap lore.