This Web Series Wants to Be the Fresh, Diverse Voice for Black Millennials 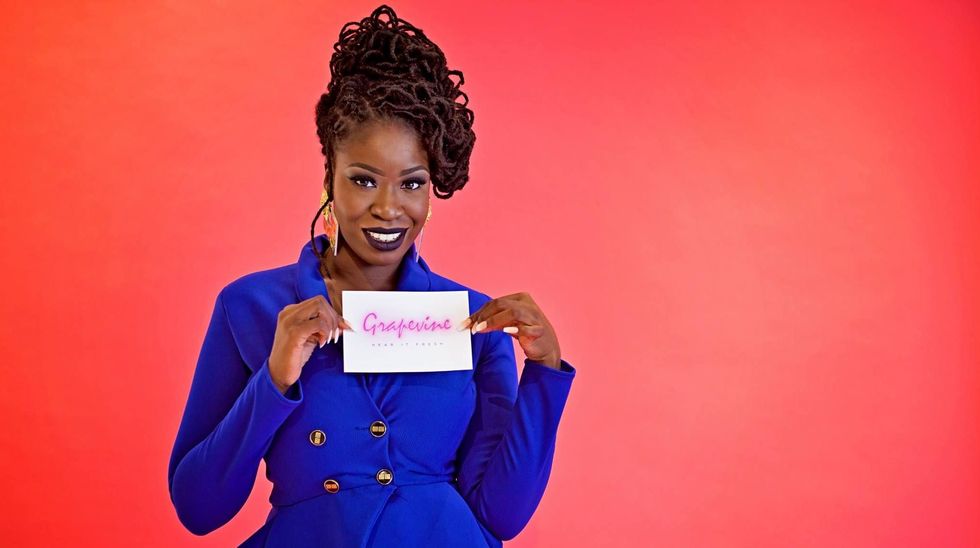 The Grapevine is a web series that gives black millennials the chance to have intimate conversations about the issues that matter to them.

In a short clip from the 1991 Spike Lee film Jungle Fever, a room of black women are seen discussing the issue of colorism in the African-American Community and dating outside their race in a dimly lit living room. As the discussion unfolds, it borders on humorous and meditative and the camera pans closer on the face of each woman as they unpack eurocentric beauty ideals and share their personal experiences.

Twenty-five years later, the 3 minute scene serves as an inspiration for the hit web series, The Grapevine. On The Grapevine, the conversation isn’t limited by gender, but the premise of the clip from Lee’s film remains the same—an intimate conversation between black and brown people about the issues that matter to them. Created and hosted by 28-year-old University of Arts graduate Ashley Akunna, the web series features young African Americans and Africans from the diaspora discussing topics like hypermasculinity, religion and the relationship between Africans and African Americans at a cavernous table in the style of a typical family dinner.

“I want it to feel like everyone in the diaspora has a representative on the show,” Akunna says.

“All the voices on the panel speak to the black experience, they are all unique and they all deserve to be highlighted and they’re often not.”

After graduating into a recession in 2011, the realization that mainstream TV wasn’t soliciting the opinion of her and that of her peers provoked Akunna to explore the possibility of creating her own platform for millennials.

“I would watch shows and I noticed that they didn’t have a millennial perspective, which was weird to me because we graduated into a recession and our voices weren’t being heard. So I said, what if I created a show that targeted millennials and we talked about issues that were important to us in a real, honest and raw manner and that’s how the show came about in 2011.”

The initial episodes didn’t make their way to YouTube till 2014 and like many successful projects, the show experienced many renovations before deciding on its current aesthetic. The pilot episodes featured a three-person panel with Akunna serving as a moderator on the news-like show. Episodes were about 10 minutes long and conversation was limited to three or four pertinent topics such as stop and frisk and the acquittal of George Zimmerman, while panelists were asked to share their opinion. In later episodes, the show grew in length and welcomed guests digitally via google hangouts and focused on one topic.

Currently, the show shoots in a quintessential a New York City studio with eight to 10 young writers, activists, students and others sharing their unfiltered opinion about one particular topic.

“The idea of the show is to bring the conversations we have with our friends and our peers to mainstream media,” Donovan Thompson, the 31-year-old who is a panelist and the show’s strategic producer, says.

The show’s tagline encourages viewers to “pick fresh views from fresh minds” and with the array of voices Akunna and her team have assembled at the table, there is variety of views to choose from.

“I don’t want anything I create to be an echo chamber, “ Akunna says.

“I don’t want have people to have the same opinions—so when we choose a topic we make sure we get people who are on opposite sides of the spectrum, but who are also in the middle.”

This dichotomy is evident in an episode of the show focused on the U.S. Presidential Election, where one of the panelists sported a Hillary Clinton button while another wore a white Make America Great Again hat. Because of the various voices at the table and the kinds of topics that are presented, the conversations are never linear or easy and the interjections from panelists are usually along the lines of “I hear what you’re saying, but I disagree.” This usually leaves Akunna seated at the head of a large table wrangling a boisterous and opinionated crowd while contributing comments of her own.

Much of The Grapevine’s appeal lies in what many young, Africans or African-Americans are used to experiencing, but not seeing visualized on the screen—their opinions not being policed, but encouraged.

In a response to the show’s episode on cultural appropriation, one YouTube comment read, “I’m happy I found this channel! More please!” While another noted that they would like to see “the conversations carried out at this channel more widely spread everywhere.”

According to Akunna and her team, The Grapevine platform will be spread everywhere in due time and will occupy a host of different formats while staying true to its intent.

“I think that The Grapevine has the capability of really providing some healing and growth for the black community. I want The Grapevine to be the show that really challenges everyone to have those conversations that help people grow,” Amanda Scott, 28, producer and editor of The Grapevine, says.