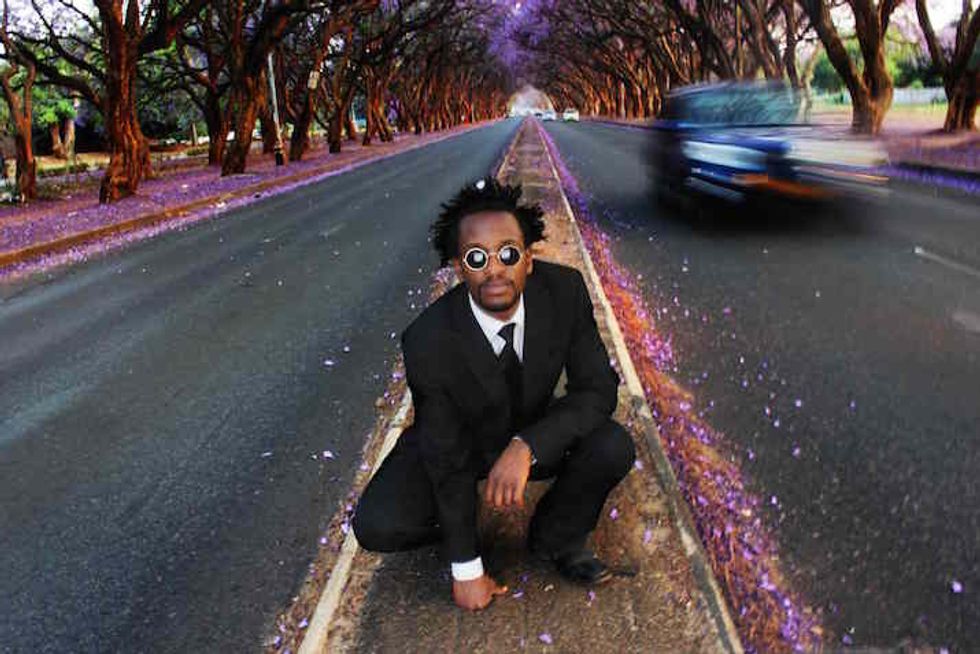 Yael Even Or reports on Zimbabwe's increasing power cuts and nightlife from Harare.

Power cuts have become so common in Zimbabwe in recent months that saxophonist Vee Mukarati didn't even realize the party he was playing at last month had gone totally dark. Neither did any of the other people moving along to his music. "It's like trying to do gigs on Mars," he told me after the gig.

It was Friday night and we were at a backyard party in the Harare suburb of Highlands. Mukarati was playing with DJ Dawee a mix of pop, hip-hop and local jazz. Whenever the sound system went down for lack of power, the audience used it as an excuse to get another drink. By the time the generator came online they were dancing again.

In the past three months Zimbabweans have been suffering from power cuts lasting as long as 18 hours a day. People say the blackouts have been happening for at least eight years now, but that it's recently become much worse. The country is currently producing less than half of the electricity it needs during peak demand time.

Fingers are pointed all over: Some people are angry at the Energy Minister Samuel Undenge for selling Zim's power to neighbouring countries; the opposition party MDC-T slams President Mugabe for that; Mugabe blames the low levels of water in Lake Kariba, which may or may not have been caused by the drought (some say it's overuse); At the same time the most apparent official version is that the current power cuts are caused by the maintenance work at the country's two largest power plants.

And while the situation remains unresolved, Harare's music scene refuses to rest. Right before the rainy season, the city had a number of major events scheduled to take place, including the Harare Jazz Festival, the International Film Festival and Zimbabwe Fashion Week. To deal with the blackouts, producers and business owners rely on diesel generators. But these are costly and suffer from technical difficulties and reliability issues. And so it's common to find yourself in a dark gathering or sitting in a fancy movie theater waiting ten minutes in the dark for the film to resume after the generator stops working.

“We as artists, as promoters, as party planners–when you put something together you know you have to consider that in your budget," says Mukarati. “If it's a paying event, the price of the ticket has to consider that."

Mukarati had recently watched The Martian, a film about an astronaut stuck on Mars. In the movie, Matt Damon's character talks about how everything on Mars is against you, and you just have to deal with things one obstacle at a time. “It's all very closely related to how I feel about the challenges of living and working in Harare" Mukarati explains.

Despite the difficulties, Mukarati, who launched his debut solo album at the end of October, is not going anywhere. He lived abroad for three years while studying music in Dublin. When asked if it was hard to go back to Zim, he replies: “Not at all! I'm crazy about this place."

“I'm not going to quit my passion and do something else that I don't care about," he explains. “I'll work with the circumstances that I have and be the best that I can be in this environment and be better equipped to work in a functional environment because I just know how to deal with problems now."

Some have an even more positive approach towards the power cuts. One of them is Cox Chipunza, a drummer and music teacher.

“Trust me, I think it's better when there's no power," he says after performing with a German jazz band on a tour, "because you're the only one making noise and everyone else is wondering where you are getting your power.'"

Power envy is a thing these days. Zimbabwe's News 24 recently reported on people organizing to “snitch" on their neighbors who, inexplicably, don't suffer shortages as often. The rationale is—if they'd tell on their neighbors they might achieve “a more equitable distribution of load-shedding." And the authorities are encouraging it.

For Chipunza, if there's power to play music—that's enough. “My dock station got a battery. So every time there's no power—I make noise, literally, like big noise. All the neighbors got to know that that guy has got something."

Unequal distribution of electricity is sometimes explained easily. Some people get continuous power merely because of their proximity to sensitive facilities like hospitals and to VIP households like the homes of ministers and their relatives.

“I'm very blessed that I'm in this area," says Zandi Mubi, the owner and the head-chef of an Afro-French bistro and bar. Mubi opened the place four months ago and has thus far had only three short power cuts. She speculates that it's because of Chez Zandi's proximity to the Zimbabwean Police Headquarters and the State House.

As a new business owner, saving from the costs of a generator and constant fuel supply is a huge relief for Mubi. Her house is a different story though. “Oh, it's terrible," she sighs. “I'll usually call home before going back there to see if there's power and if it's not there—I'll just stay at the bistro and keep on working."

On a brighter note, Mukarati says the electricity shortages have their occasional advantages. At the Harare Jazz Festival in September, he and his band were slated to play a less favorable off-peak time slot, but because of a malfunction with the generator, the set was pushed.

“So we ended up doing a prime time sunset set followed by Tuku," he says enthusiastically. “Oliver Mtukudzi played right after us and it was one the best gigs we had all year and it wouldn't have happened if there hadn't been a power cut."

Saxophonist Vee Mukarati parties in the dark at Tristan's at 14 Aintree (AKA Half Bar) in Harare.

Yael is a writer and radio producer based in New York. She covers the Middle East, Africa, immigration and security. She's the co-founder of the Hebrew language site african.co.il. You can follow her on Twitter at @yaelevenor.