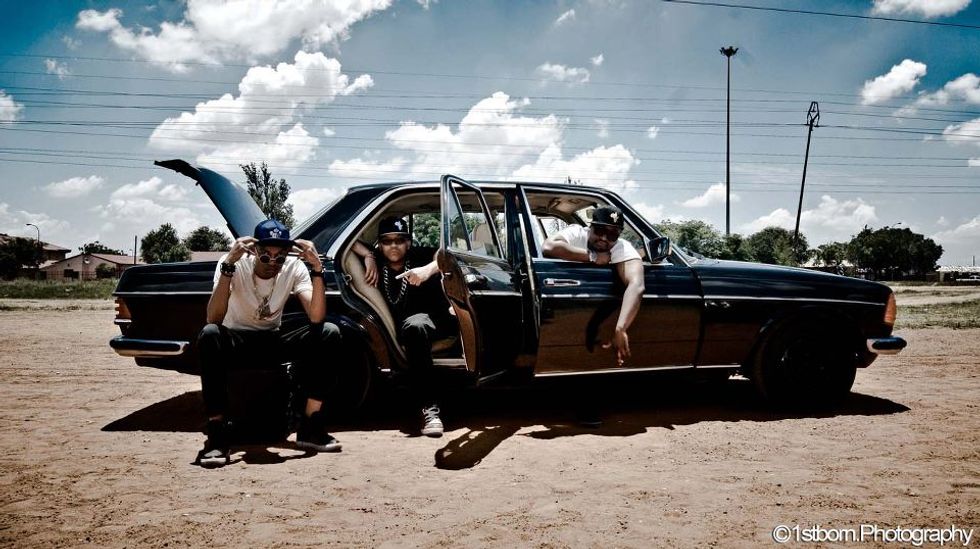 Okayafrica gets to know Mafikeng rap trio Hash One in the latest edition of First Look Friday.

The South African town of Mafikeng, or as it is popularly known as “MafTown,” has steadily been producing some of the dopest MCs in the country over the last ten years. And in keeping with tradition, Hash One may be the next best out of the North West. The group, comprised of three unique and dynamic MCs, has been quietly gathering steam and serious clout in Mzansi’s rap scene. With solid features, collaborations and a dope mix tape ("M4TLT – Mahala For The Last Time"), they look set to light up 2014 with more heat. They were featured on Khuli Chana’s banger “Wannabeez” at the end of the last year to great critical and commercial praise, and they are about to drop the video for their much anticipated latest single “Time of My Life” (look out for the premiere on Okayafrica in the near future). The production on the track is crisp and sonically pleasing to the ears, hard not to nod your head as the emcees drop some deadly bars and Tshego seamlessly croons on the hook. It’s clear that the Sotho Mafia Entertainment representatives are having the time of their life. We caught up with Hash One's Sun G, Mr. Mix, and Nasi for the second installment of OKA's new First Look Friday series.

Mzwandile for Okayafrica: Who are Hash One?

Hash One: Hash One is a hip hop trio consisting of Nasi, Mr. Mix and Sun G; three of the most talented undiscovered rappers from the Motswako hub of Mafikeng. Individually we have generated hype for ourselves by releasing well received songs and landing features as members of the sound design company, Sotho Mafia Entertainment.

OKA: What music did you listen to growing up?

Sun G: Personally I grew up listening to Kwaito. You might find that weird but that’s how it all started for me. "Kaffir," by Arthur, is the reason I fell in love with music. So initially, I was all about Mdu, Trompies, Abashanti, Thebe, Boo Shaka…you know, the legends. I then started enjoying all types of genres, from Joan Armatrading to Michael Jackson, anything that was good really, and I still feel that way. I generally enjoyed mainstream music for the most but it was when Busta Rhymes emerged, and later Eminem, that’s when I really became taken by rap music.

Mr. Mix: I listened to all kinds of hip hop, from Kriss Kross to Queen Latifah, Biggie, Busta Rhymes, Tupac and the list goes on.

Nasi: Funny enough I was never really a fan of hip hop or rap music until around 2003/2004. I was aware of it but it did nothing for me. It all changed when I heard a song by Talib Kweli and DJ Hi-Tek (Reflection Eternal) called “Love Language” from the album Train of Thought. That song made me start paying attention to rap and made me go back in time to find a lot of music that sparked a feeling in me that I couldn’t get rid of. I’m talking about the likes of Common, Nas, Jay-Z, Kanye West and of course right at home there were guys making dope music, the likes of Morafe and HHP. They made Motswako what it is today.

OKA: What do you think about the state of hip hop in South Africa?

Nasi: Hip Hop in S.A has come a long way! The growth that’s taken place is amazing and I’m thankful for that.

Sun G: I mean, when we were growing up, there really wasn’t much of a hip hop industry in this country. It took people like Amu, Proverb, Tumi, P.O.C and the likes to believe in themselves and in the movement as whole, in order for us to get to where we are.

Nasi: A lot of artists have gained a better platform to express themselves and now look at making music as a career rather than a hobby, which is all good but there are too many western influences that are being celebrated and glorified throughout Africa.

Mr. Mix: Originality is lacking, everybody sounds like everybody. Adding to that, it is moving to “swag music” more than it is rap Music

Nasi: And I think as African artists we need to embrace our own culture more and let the western world do their thing. Be original, be dope! They will catch on sooner or later!

OKA: Maftown has produced some of the freshest MCs, including two of the current hottest in the game, in Khuli and Cassper. Do you feel any pressure coming from Maftown?

Sun G: Nah. Not at all. I swell with pride knowing that my town is being repped so hard. There’s a lot of added pressure in that the bar is set so high and there’s no room for mediocrity but I relish that kind of pressure. At the end of the day, it’s about being fresh and original.

Nasi: There is some pressure. If we didn’t feel any pressure then we would simply be arrogant. We believe that we are dope and the music that we have put out over the years has proven that fact.

Sun G: MafTown artists are invariably dope because the fans back home have very high standards so you really have to be good to impress them.

Mr. Mix: Although at the end of the day, it is all a competition. We might come from the same hood, but the style is different, even between us as Hash One, the competition is heavy.

Nasi: The only competition for me is Mr Mix and Sun G, anybody else is not a factor.

Mr Mix: The only pressure I think we would have is just to hold the torch and not disappoint our home.

OKA: When Khuli featured you on “Wannabeez,” from my perception it kind of felt like when Drake let Kendrick shine on "Marvin’s Room." How did it feel to you?

Nasi: I had a radio interview a few years back and I remember saying that if there was any one that I wanted to test my skill against, it would be Khuli Chana. I prayed on it, it happened. Now here are a few months later and WE KILLED IT!

Sun G: Haha, it was just a chance to go toe-to-toe with two of my idols. It’s always a competition for me.

Mr. Mix: Working with Khuli was an absolute pleasure, we were moved to the big leagues, he really put us on, and that put us on a whole different platform in the game.

Sun G: It was a great experience that I will always hold close to my heart, but we want to move on from that and do bigger and better things. Ya’ll aint really heard nothing yet from Hash One!

OKA: What can we look out for from Hash One this year, whether it be videos, new music or shows?

Sun G: We did two amazing songs for Khuli’s Bed Bull project last year, "Time Of My Life" and "Katara Palamist," for which we’ll be dropping videos this year, starting with the former. Other than that, I think you can just expect more music.

Nasi: This Year we plan on making more appearances, doing more features with industry leaders and we are definitely gonna be releasing dope singles throughout the year just to win over the people that are not yet convinced.

OKA: How did Hash One come about?

Nasi: It was unplanned. At the time we formed the crew, Sotho Mafia had a lot of artists that were very commercially viable and they we all working on individual projects. At the time we were just making music that we dug and it just so happened that Sun G, Mix and I were all on the same page in terms of what need to happen. We were already recording together and we just need to name what was happening. Hash One made sense cause that’s exactly what we want to achieve, become number one!

Sun G: We were all solo artists under Sotho Mafia Entertainment and neither of us were working on any projects so we decided to get together and work on a mixtape. That mixtape was M4TLT – Mahala For The Last Time, which we dropped about a year-and-a-half ago.

OKA: How do each of you approach writing a track, i.e pen and pad, on an electronic device etc..?

Mr. Mix: Paper and pen. The words are like one big puzzle to me, but the picture comes out in HD!

Sun G: Well, I don’t write at all, so it’s a little difficult to explain. I just feel my way around the beat. Whatever it makes me feel, is what comes out. I don’t have a particular style of rapping so you never know what you’re gonna get with me.

Nasi: For me it all depends on where I am and who I’m with. Pen and pad is what I normally use but as of late, and I think Sun G has a lot to do with it because he doesn’t write, I sometimes just go in on the mic with no script!

OKA: You are part of Sotho Mafia. Is it a record label or a crew or something else?

Nasi: Sotho Mafia Entertainment company came up with a unique concept that covers a broad spectrum of entertainment management services ranging from recording music, artist management, sound design (for both radio and television), and eventually film and all related activities.