Kintsukuroi: A Lesson in Breaking 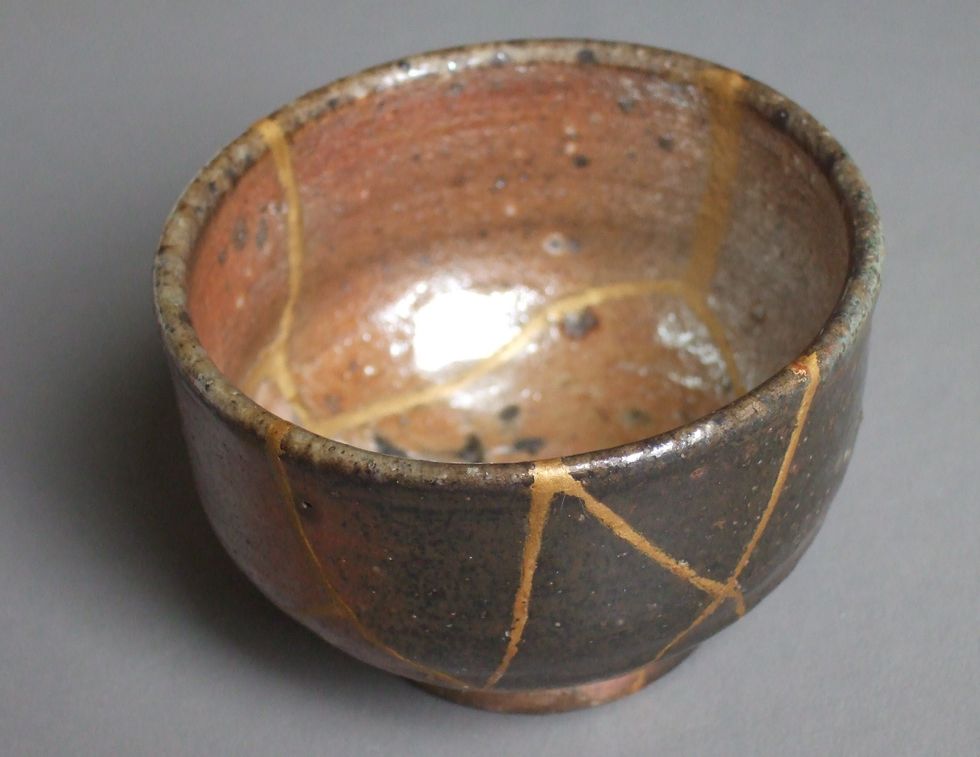 On healing after losing a child and finding beauty in the cracks of one's shattered self.

The greatest creation I've ever made falls out of me at 18—my life's work dies. I watch in disbelief as what I thought was just a particularly horrible menstrual cycle produces something bigger than a blood clot. Something I could have named had it stayed inside me and grew. I miscarry on our toilet at exactly 7AM on a Monday morning, the day before Valentine's day.

Up until then, I'd believed myself infertile. Despite having risky, unsafe sex with my boyfriend at the time, who was trying his hardest to put a baby in me and cement our ridiculous, adolescent relationship, I'd had nary a pregnancy scare. In fact, I'd had the opposite—an irregular cycle which would see my period disappear for as long as 8 months at a time—and that, coupled with fibroids which were large enough to distress my doctor but not enough to spur him into any sort of action, all ultimately led me to believe I was incapable of bearing a child.

Kintsukuroi ("golden repair") is the Japanese art of repairing broken pottery with lacquer dusted or mixed with powdered gold, silver, or platinum. As a philosophy, it treats breakage and repair as part of the history of an object, rather than something to disguise.

Between the age of 17 and 18 I'd spent my private time trying to accept that I would not be able to do the one, greatest thing I was raised to believe I was supposed to do as a woman—reproduce. Then, one fine morning I had two revelations at once—turns out I CAN fall pregnant, BUT my first baby isn't destined to make it.

The day passes in a blur as I try to digest what's happened as well as figure out what to do next. I do not get the opportunity to be gleeful at my fertility because of my loss. And as my foetus floats somewhere beneath the city, I float above—in shock, in pain, in solitude. It's a wound that will take many years to heal, a trauma no one could have prepared me for.

For years afterwards I wonder if I was to blame, somehow. I wonder what the baby would have been like. I wonder if, once I accept that God's timing is always perfect, losing the baby was merely a sign, a way to show me that I could conceive and that it was not necessarily the right time for it then. I wonder about my womb—the ultimate creator and protector of Life—and it ultimately letting my child die and expelling them instead. I hate it. I distrust it. I distrust myself. It's as if the first thing a mother is supposed to do, keep the baby alive, I have failed at and so how could I possibly expect to be a good mother at all in the future?

The pain and confusion fester and I let my dreams of one day being a homemaker, a mother, a lover, a safe place, wither away and dissolve. The hardest part of the loss, I come to accept, is the not knowing. There is no final conversation, no reason why, it is just done, and when it comes to explaining your pain to other people, those who have not experienced it simply do not understand.

"It's sad but look at it this way, at least now you can still be young, you know? Not like, a teen mom. And you know to be more careful, that's great!," some say. "This might sound insensitive but, how could you miss someone you never knew? Granted it was your child but... you didn't even know it was there!," some echo.

I think I hear what they're saying but I also think I'd very much like to punch them in the neck.

I learn two integral things at that point in my life. Firstly, loss does not need a whole performance to exist. If you feel it, that is valid enough and you owe no one proof of your pain. Second, closure is not a real thing. It is not a given, not in breakups, or deaths, or when you get home and you find the Chicken Licken lady didn't include the free hot sauce to go with your hot wings. Contrary to popular belief, closure is an extra and not a necessity. The level of importance one places on it defines how well they heal without it.

It takes two years for me to finally be able to talk about my baby, my body and my loss without guilt. Post incident, the coupling of my menstrual cycle and menstrual cramps would bring fresh waves of fear, pain and guilt, as I had flashbacks of that morning. It was ridiculous to try and explain to people so I didn't. It took finally having babies that lived for me to loosen the grip around my own neck and on that memory, not because I saw my children as replacements, but because I saw them as a continuation of a journey started on that morning.

The story of my womb and my womanhood, I'd decided, would be more than loss. It would be multifaceted and beautiful and gut wrenching and above all else, important. As a continuation of my lineage, a documentation of my trials and tribulations, but also, a public display of my highest form of creativity. My children now are triumphs, just as the baby that didn't live was. I need to believe that it was a lesson in some way—the opening of a door—in order to usher in a new aspect of the woman and mother I'd become. If my miscarriage was my self worth as a young woman shattering, based on my (in)ability to conceive, ever conversation about it, every tear and every act of love I have shown to my children since then has been the gold that pieces everything back together, just like the Japanese act of Kintsukuroi. I am better now, I believe, because I was broken then.