Interview: Hiatus Kaiyote On Their First Show In Cape Town 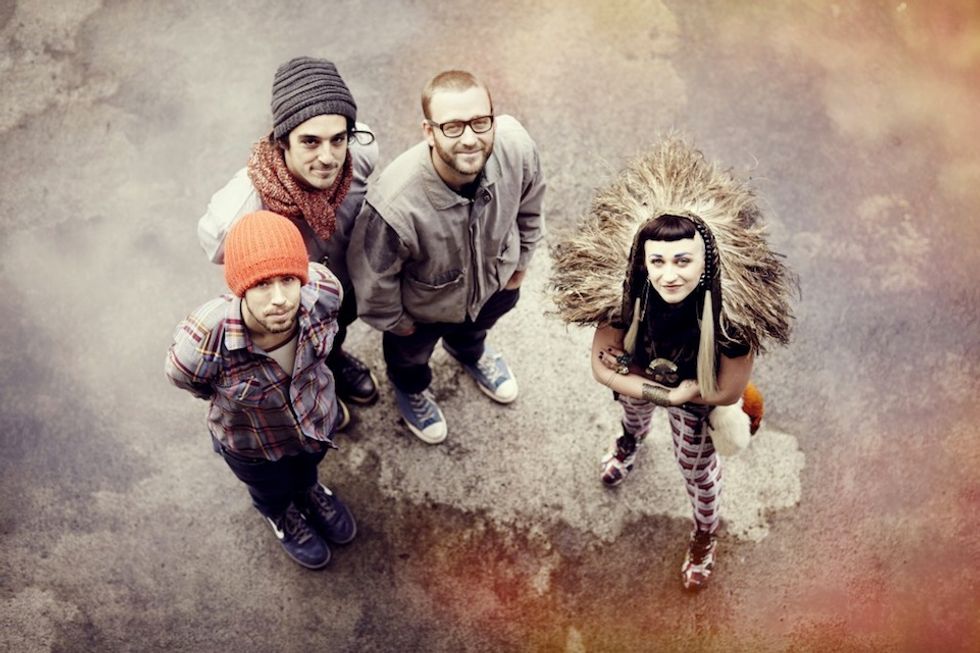 South Africa has raised the bar yet again with the 15th Cape Town International Jazz Festival last month, turning the city out with thrilling performances by both local and international jazz-influenced industry powerhouses, including a long-anticipated headlining set from Erykah Badu. Weeks later, folks are still reeling over what a great experience the annual event was. Singer-songwriter Nai Palm and Simon Mavin from Hiatus Kaiyote, who traveled all the way from Melbourne to grace us with their “multi-dimensional, polyrhythmic gangster shit,” took the time to chat with us about their South African experience, what the journey has been like up until now, and some of their favourite African influences.

Shiba for Okayafrica: Let’s go back to the very beginning. What were your ideas initially when Hiatus Kaiyote first came into being and what has changed about your lives since then, now that you’ve set foot on almost every continent?

Simon Mavin: Initially we got together to work on Nai's music of which she had already written a bunch of tracks, but soon after we started jamming together we began to write as a group. These days we try not to limit ourselves to any kind of writing process– this tends to help us keep it most creative. For me, I think seeing the world has made me realize how special the Melbourne music scene is. You gotta check it out!!

OKA: What was your first ever performance in South Africa like? People say Australia and SA share a lot of similarities, is this true for you?

Simon: The first performance was amazing. We had an incredible response from the Cape Town crowd and hope to come back very soon. We only got to see Cape Town but it seemed to have a similar vibe to Melbourne, especially the unpredictable weather...

Nai Palm: I loved the smell of South Africa. I'm hyper aware when it comes to the senses. I love that you can smell the richness of earth and animal and ochre in the air, even for a city. As far as our performance went we were beyond welcomed with open arms by the warm spirited people of Cape Town. The audience definitely held us, allowing us to develop emotionally through our performance.

OKA: What did you get up to outside of the Jazzfest... Any sightseeing?

Nai: It's rare for us to really explore the places we tour beyond media and performances but this time we were really blessed to have a couple of days free to absorb our surroundings. We spent the day at Table Mountain. I had a beautiful exchange of red desert from Australia for some rain water from the top of the mountain. I relish the opportunity for natural ritual. And the mountain that I had only experienced through Abdullah Ibrahim's music. Perrin bought a bellaphon from the Pan African market on Long Street and I made friends with Sal, a beautiful Tuareg silver merchant that I gave an Australian python skin to that was originally for a Sangoma friend of a friend that I'll have to wait til next time to meet.

OKA: Did you get to meet any of your favourite acts from around the world simply because you were there for the same event?

Nai: Well Badu and crew have been championing our music for a minute so it was rad to reconnect... And the Snarky Puppy boys we met at the Grammys. New friends from the Fest... Lalah Hathaway and her drummer Eric who worked extensively with Aaliyah in our own city no less. Also Chris “Daddy” Dave was a total gem!

OKA: Word is there’s some West African music that inspires your work as a band too. What is it about indigenous music that captures the band?

Nai: I'm actually listening to Rokia Traore as I write this... We are collectively in awe of culture, period! Ancient and contemporary. The inspiration is boundless, however there is no mistaking the particularly rich and intelligent depth to a lot music all throughout Africa... Mulatu Astatke from Ethiopia who I've actually had the pleasure of jamming with, Oumou Sangare who has been a staple in my emotional well being since I was 15, Mariem Hassan from the Sahara... Abi Nagano, Fela Kuti. All incredibly stimulating and inspiring artists.

OKA: Did you meet any creatives from SA you’d be interested in collaborating with or any of our musicians or styles that you like? Have you heard any kwaito, South African house, or mbaqanga?

Nai: To be honest I'm not that aware of the music scene past and present in South Africa. Xhosa sonically as a language is so incredibly percussive and musical. Definitely intrigued and in awe because of my surface introduction to the culture there.

OKA: Nai’s collab with Taylor McFerrin has just been released and it sounds great, and so do the Clever Austin beat tapes. In previous interviews you spoke of creative freedom, and it seems like you guys have that on lock…

Nai: The track with Taylor was my first introduction to New York... First time overseas ever... I wrote to the beat Taylor sent me on the plane and recorded it the very next day, then performed it the following day as part of the Brainfeeder showcase. The shit was terrifying and liberating at the same time! I'm really proud of it actually. We are all hyper creative and always strive to challenge ourselves in what ever we apply ourselves to, both collectively and individually. It's the driving force behind this whole sonic union of ours. Salaam Remi, iconic producer and head of his Sony imprint "Flying Buddah" that we are signed to, has given us free reign over our next record. It means the world to us to have a solid team to work with that believes enough in our artistic vision; it's so rare.

OKA: Lastly, can you elaborate on some of the upcoming adventures Hiatus Kaiyote as a band are due for, and what kind of shifts we can expect in the near future?

Nai: Currently we are focussing on our new record full time and continuing to create little sonic habitats to enhance the emotional transformations of peeps around the globe. Travel, eat, make art, make friends rinse and repeat! Love!