In Conversation with Becca: Ghana's Powerhouse Reaches New Heights on Her Album 'Unveiling' 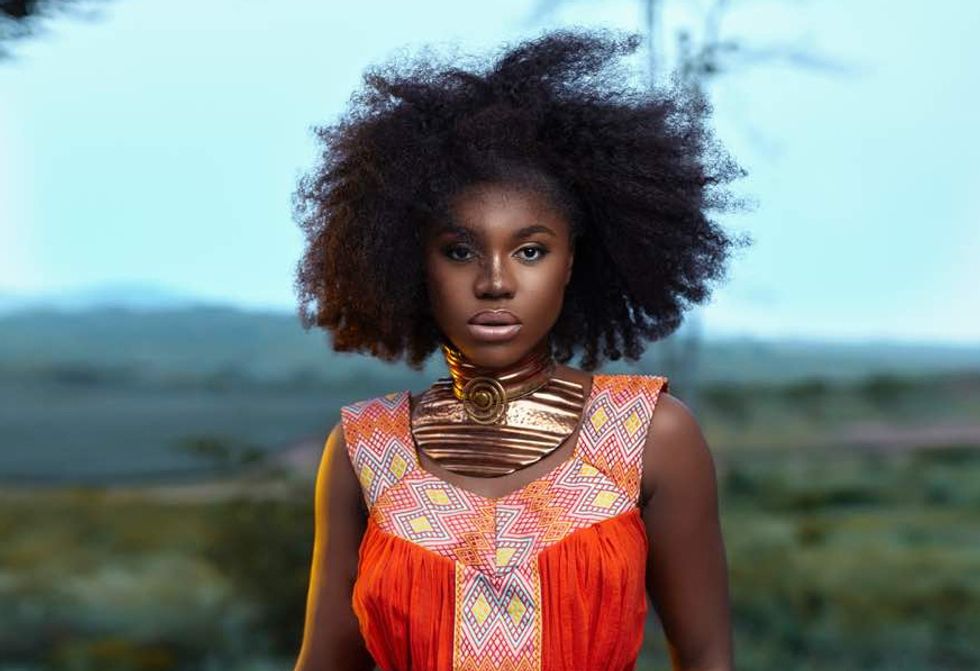 We catch up with Ghanaian singer Becca on her new album and her career spanning 10 years.

"Who has the greatest voice of all time?," I ask.

Becca hesitates before giving an answer.

"There are different types of voices," she says, circumventing the question before listing names: Salif Keita, Youssou Ndour, Yvonne Chaka Chaka, Miriam Makeba, Papa Yanks, Osibisa, Oumou Sangare and Brenda Fassie who is "one my favourites, someone I've been compared to when I'm on stage. She's something else."

The singer is in London to promote her third album, Unveiling, which was released in August. Her two previous albums—Sugar (2007) and Time For Me (2013)—have earned her numerous accolades from Kora Awards and Ghana Music Awards, among others.

Admittedly, my lead question was not a fair one to ask, or even well put, but her answers were more generous than I'd expected.

When she later mentions Onyeka Onwenu as another "greatest voice of all time"—perhaps recalling that she was being asked by a Nigerian journalist—I tell her that it's almost a relief when a list of notable Africans, in any field, are mentioned without a Nigerian in it, and this only makes her laugh.

Becca's own voice is distinctive in the way other singers' voices aren't. Words like rich, engaging, commanding or power-house may well explain it, but the image that comes to this listener, when she goes into the high octaves, is of liquid just when it starts to boil.

Becca's appraisal of her own prowess is measured, "I have a distinctive voice that would be someone's favourite but not another person's."

On account of the early success of Unveiling, it's safe to say Becca is many people's favourite.

"Beshiwo," her duet with Bisa Kdei, earned her nominations for Best Female Vocalist and Best Collaboration at this year's Vodafone Ghana Music Awards.

"Na Wash" which she describes as "a very interesting mix of afrobeats, dancehall and a bit of that jazzy feel" will soon exceed 8 million views on YouTube.

"To wash" a person is pidgin slang which, before this new afropop era, meant to give someone a good talking to or even to insult at length, but has now come to mean deceit or lying to gain an advantage.

Featured on the song is Patoranking, one of few artists in whom dancehall & afrobeats live as one, "I was thinking 'who can I put on a song like this?' and nobody popped in my mind but Patoranking."

What is now an undoubted hit was one Becca wasn't too sure about at first: "it's not the normal Becca but I was quite fortunate that people are really enjoying it, which is a good feeling."

Her latest single "Number One" features Mr Eazi and judging by the viewcount on YouTube, has quickly become a surefire hit. Four days after its release in September it had been watched about a million times, and two weeks later this number rose to 3.2 million. The only other afropop song racking up so many views in the same period was Olamide's "Wo."

"Number One" is simply about a lover being first and foremost, and features Mr Eazi whose signature drawl (Eazi-tone?) contrasts well with the power in Becca's.

Becca's power-chords on a thumping house beat are an easy sell on "Steady." The song features Ice Prince, who she describes as "a poet, lyricist and an amazing songwriter."

About the co-writer Robby Adams she says "I think the young ones are doing quite well and must be applauded."

The applause is not reserved for the young upstarts. Joyce Blessing, a powerhouse in Ghana's gospel scene, is featured on the remix of "Mo" because "she has a big voice and she moves a crowd."

Blessing's own power vocals and the gruff in that of Stonebwoy, who features on "With You" are the only two singing voices on Unveiling that match Becca's in command.

She sings mainly in English, Pidgin and Twi, one of the widely spoken languages in Ghana. My own Twi, having lived in a mostly West African community in London, is yet to develop beyond greetings and other common phrases.

Afraid the artist might think the journalist has not done the required homework, I hesitate to ask for meanings of song titles and lyrics, though I need not have worried as "that's exactly what I want you to do, I want you to ask me so I can tell you this is a song from Ghana" says Becca going on to explain why, "once I speak English I could be from any part of the world. So when I say 'h3w' you'll be like 'what is that?' That means 'look' in the Ashanti language in Kumasi."

The meaning of "Beshiwo" she says is interesting but warns that knowing of the meaning will "pain or hurt you" and so I brace myself as she explains "it's really a song about how a man should take care of a woman because, if not, somebody else is going to sweep her off her feet."

I assure Becca this has not been a problem, though I'd expected worse, something close to a personal attack and not good relationship advice. "Everybody sort of knows Becca, I'm for women all the time" she adds, pressing her point.

Kofi Kannata verse on "Don't Know," about a flaky lover, is of particular interest. Kannata raps in Fanti, which is dominant in Central Ghana and his own dialect Becca says is "very, very hard to understand."

In begging this lover not to leave, Kannata retells the Bible's origin story but with a plot twist, "If Adam and Eve were Chinese people, Eve would rather kill the serpent and make soup than betray Adam"—a witty reimagining sullied by racial overtones.

Away from the songs, the album's promotion has been a crucial factor to the successful reception Unveiling has received. For this European leg of the promo run she has visited Paris, Prague, Budapest and Amsterdam.

For the London run, "An Evening With Becca" was held at 57 Restaurant and Lounge and hosted by Afua Adom and Shopsydoo, both on-air personalities and well-connected in the London's afropop scene. Radio and TV appearances followed, as well as the cover art for "Unveiling" advertised on the city's big red buses, indicating a well-planned and well-funded campaign.

She also made an appearance at Ghana Music Awards London where, upon entering the huge hall of Dominion Centre midway through a live set, the singer announced on stage to everyone that "if Becca is here, that means Jesus is here"—an overstatement no doubt, but one that signals the significance of the guest appearance.

"I think it's important that people put a lot of work in promotion. That's one thing artists from our part of the world do not pay attention to," says Becca concluding that "you could be the best thing in the world but if you do not promote it, I bet you you'll stay in one place and not go anywhere."

And she should know. Her recording career has spanned the last 10 years, and to celebrate the milestone, a concert "Becca @ 10" is planned for October 21 at Ghana's National Theatre no less. Slated to perform are special guests who will be announced soon.

"I must go home now and put everything together."