In Conversation: The Makers of ‘LUCE’ Use the Film To Turn America’s Ideas of Race & Identity on Its Head 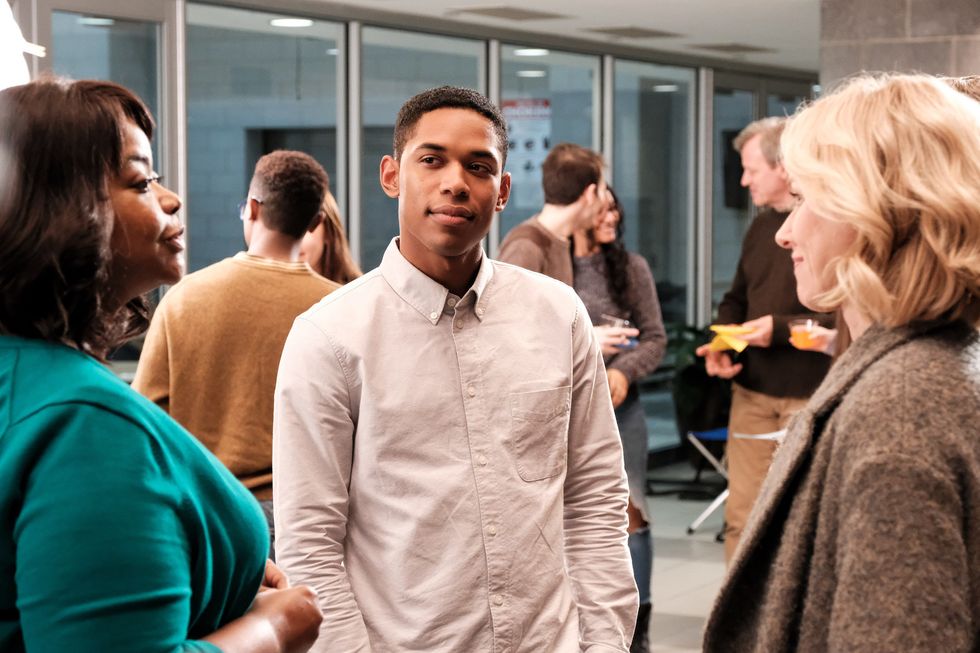 We speak with playwright JC Lee and director Julius Onah on how this psychological thriller is unlike any other as it addresses social issues in an uncommon way.

LUCE is not your typical psychological thriller. There's no predictable storyline, no sweaty close-ups of despair, no screams that echo. The eeriness that sticks with you in this film comes from the realism of how the mind games are presented.

Set in a well-to-do suburb in Northern Virginia, the film follows Luce (Kelvin Harrison Jr.), an all-star high school athlete and lauded debater whose white parents (Naomi Watts and Tim Roth) adopted him as a child from war-torn Eritrea. Raising him to succeed, his community ultimately considers him to be the poster child of the American Dream. His teacher, Ms. Wilson, (Octavia Spencer) then makes a shocking discovery in his locker, where Luce's reputation gets called into question and where the mind games begin. By the end, it's left up to the viewer to determine whether he's truly at fault or if his teacher is preying on dangerous stereotypes.

LUCE was initially a stage play written by JC Lee and made its debut at the Lincoln Center back in 2013, when he was fresh out of graduate school. Taking on the challenge from his professor to write a "grown-up play," a departure from his quirky, sci-fi works, he revisited a scene he wrote while working in public schools in San Francisco.

"I had met a lot of very well-meaning white parents whose politics and what they actually did in their behavior were sometimes not always the same thing," Lee explains. "And I found that the distance between those two things were very interesting."

Director Julius Onah (The Cloverfield Paradox) came across Lee's script from Brian Grazer and Kim Roth at Imagine Entertainment while working on another film there. He knew this would translate well for the big screen because of how the film approaches race and identity in a non-prescriptive way. "There's an easy, digestible synthesis of it all—but the world doesn't work that way," Onah says.

In the conversation below, we go even more in depth with JC Lee and Julius Onah as they touch on how they tapped into their formative experiences to navigate the themes in the film.

Antoinette Isama for OkayAfrica: What was the response to the play once it was initially presented?

JC Lee: The most vivid memory I have was the very first reading we did of the play at Juilliard. It was for the entire drama division. And when the play ended, the place erupted. People were really, really triggered. Some students were getting up and saying, "This play is the study of evil. This is about how evil manifests in everyday people." A lot of students of color were standing up and saying, "This is about a kid who's had an unfair burden put on him and he's fighting for what he believes in." It actually caused almost a physical fight in the classroom.

Julius Onah: And make sure you tell them a little bit about the ending of the play, though, maybe?

JC Lee: Oh, in the original ending of the play, Harriet goes to check her desk and the fireworks explode, and Harriet goes to the hospital. It's a much more violent ending—so it was really shocking to people. I had no idea that the play was going to provoke that kind of response. I think what we tried to do in adapting it into the film was to protect and to preserve the stuff about the story that made it feel dangerous and try to explore it in a deeper way.

Aside from perception, identity is also an overarching theme in the film, where it looks into how complex it can be to be black in America, to be an immigrant, and then in Luce's context, to be a child soldier who was adopted by a white family in northern Virginia. Growing up in a D.C. suburb, it wasn't until leaving there that I realized the 'diverse suburb' can be an oxymoron. Reflecting on your experiences growing up, how were you able to navigate those themes throughout the film?

JC Lee: I'm multiracial. I have a lot of different ethnicities in me. My family's very, very diverse. And so, I grew up here in the city on the Lower East Side. The funny thing about New York is it's incredibly diverse, but every community has its sort of niche. And I learned at a very early age that I could navigate all of those communities because they just assumed I was part of them. And I could learn their vocabularies, learn their anxieties. It made me very good at code-switching at an early age. It made me very good at understanding how I am perceived in the world, and how I could use that to my advantage. That if white people are nervous around a certain kind of person, I can make white people feel better about me hanging out with them. And then they got to feel good because, here's their brown friend. And I got to feel good because, "Look, I'm hanging out with these white guys," right?

And so I identified with Luce in that way, I think. When you're coming into a group like that and you have those antennae up, you can see that a lot of what people believe is premised on a feeling— a feeling of belonging, a feeling that, "These are my people and those are not my people." And, I'm always interested in smart people who believe a thing, thinking they believe it for one reason but then driving the car down that road and realizing that that's not actually reason they believe it. They believe it because it makes them feel a part of something.

I think part of what makes LUCE work as a film is that everyone has that. Everyone has a set of beliefs. And fundamentally, they believe themselves to be good. And they are, on some level. But that, when you drive the car of an ideology to it's inevitable conclusion, it tends to leave you in a bad place. And so, I think that part of my experience growing up was all about learning that and unpacking that. I think writing the film was processing it, for me, in some ways.

Julius Onah: Much like JC, I had my own journey navigating multiple identities. I was born in Nigeria, moved to Arlington, Virginia when I was 10, lived in the D.C./Virginia area. My dad was an ambassador. There was a version of my life, or a portion of my life where I had privilege, and it was akin to Luce living with that white family, and then, in a predominantly white community when I was in public school in Arlington. After my dad left, it was us kids with my mom and we were in a difficult immigration situation. I had a full year where I was undocumented—I couldn't work. I was working as a busboy under the table. When I was in high school, I remember I got a welfare gift. We were living in lower-income housing and I remember wearing Tommy Hilfiger in high school was a huge deal, I got a Tommy Hoodie.

Like, JC, I had to navigate these different environments and contexts. I would see how people would treat me, "Oh, you're the distinguished Ambassador's son" to "Oh, you're the kid who's receiving a welfare gift. You can't afford to get lunch at school, so you're going over to your friend's house to eat lunch. And how come you're there for dinner, too?" So having all those different experiences and realizing what masks you need to put on to be accepted became a big part of my life even beyond high school, and into college.

The psychological, emotional experience of living your life that way and the boxes that people put you into, and then the privilege you have as an extent of it, I really identified with DeShaun as much as I identified with Luce. Because I had lived both of those lives and seen a version of, like, "When I fucked up as one person, then you're done." But, when I'm the other person, "Oh, well, maybe I'll get a few more opportunities."

In closing, have either of you ever felt the sense of being very hyper aware of how you exist in the world? And has there ever been a point where you've felt the urge to be done doing that?

Julius Onah: There's never been a point of saying, "I'm done," at least for me—because I don't think you can be. And that's also part of the point of that final shot, it's like, "Well what is Luce running to? And what is he running from?" And if anything, it's part of what Harriet is trying to help him understand that, "You're never going to be done, not now." The work that this country needs to do and this culture needs to do, to get to a place where the Luces of the world have access to full spectrum of humanity, and get to define themselves on their own terms, whether you're black, or a woman, or you're gay, or whatever the case might be, for any of us who are in a marginalized identity, or a historically marginalized identity, we don't have that privilege.

So, you're going to always have to do that work. At least for me, personally, I don't feel like it's ever changed. I had an experience working out in Hollywood where I very much so, acutely, got to feel what that is like. And here I was thinking, "Okay, I've achieved a certain degree of success. And now, I'm in a mantle of leadership. I'm a director of a certain kind of project." And you see that even when you are afforded a certain degree of power, there is a box that people can put you in that quickly undermines that.

JC Lee: It's so funny because I just had a meeting with a pretty high-level producer. And I sit down to talk about this project, and the first thing out of this guy's mouth was like, "So what are you?" And I was like, "I'm used to answering that question, I've answered that question my whole life." But you think at a certain point, you're like, "I'm an adult now, I'm a professional. And yet, you still have an impulse to reduce me to something you can understand." Which again, I understand that impulse, but it's wild when you're like, "Wow, I'm going to do this forever."

Julius Onah: You're going to do it forever. It's not going to end.