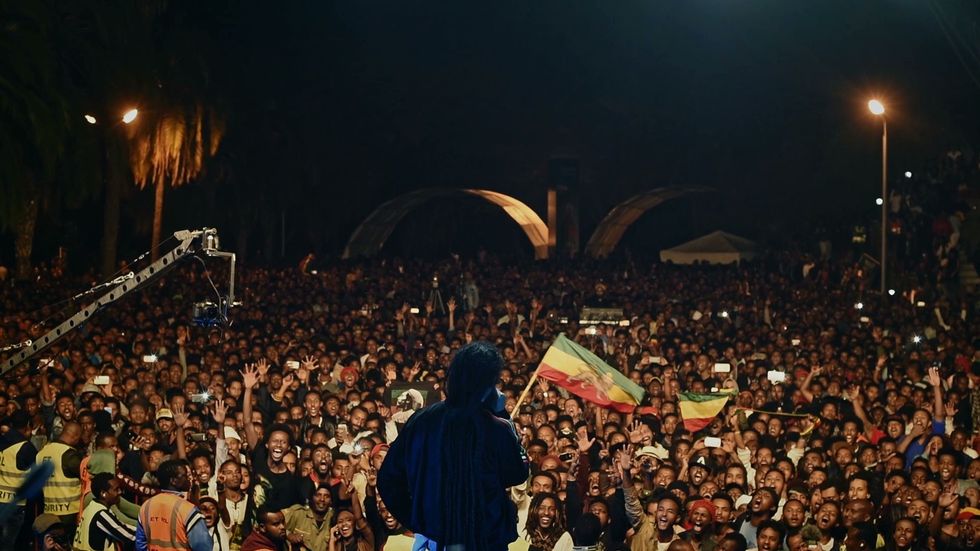 When we caught up with Damian Marley to talk about his new docu-series, Stony Hill to Addis, we couldn't just stop our conversation there.

In part two of our Q&A below, we talk about afrobeats, his musical influences, Pan-Africanism and more.

OkayAfrica: Are there any African musicians that you're listening to right now?

Damian Marley: I recently just met WizKid where we listened to a few of his tracks. We're hearing a lot of afrobeats music that's getting a lot of play on the radio—it's in popular media right now.

What do you think about the afrobeats sound?

I like it because it reminds me a lot of dancehall—it sounds very similar to Jamaican music.

I've always noticed, even in the early days of popular African music, especially in West Africa, there's always been that cross-cultural exchange going on which I think is really cool because it's a way that we're communicating with each other and still connecting with each other even though we're so far away.

Of course and you know with any connection, especially with social media, everyone can keep in touch. You can be anywhere on the planet and know what's happening on the opposite side of the earth. So everyone is much more connected now, too.

And with our ability to connect as a diaspora and even throughout the continent, do you think is it possible for us to truly be a Pan-African community?

In my opinion right now, I think the world is moving toward becoming one global community. Traveling, you really find that cultures are mixing. Even in music, there's really no true genres anymore. When you listening to music now you can hear how every genre influences each other.

Just touching on your discography and your trajectory as an artist and your relationship with hip hop, alongside the Distant Relatives that you worked on with Nas, you've also collaborated with other hip hop artists like Snoop Dogg, even Eve and most recently, Jay-Z on 4:44. How much of an influence does hip hop have on you?

I find a great influence in hip hop music. I find that they influenced my teenage years. I love the storytelling. I love the culture of hip hop. It's very similar to reggae culture.

Of course the two genres of music are historically intertwined, you know what I mean. Some of the forefathers of hip hop were people who came from Jamaica and brought our culture over and then reinterpreted it here in America, you know? Likewise, there is other music that I listen to that influences me like hip hop does—like Nat King Cole—I'm a huge fan of his.

Anything that I'm a fan of has greatly influenced my music one way or the other.

Given today's political state and given today's musical state, do you feel that music can still be used as a revolutionary tool for change? Like the way that we've seen in the past especially with your father, Bob, and even with Fela Kuti. What are your thoughts on that?

Yes, of course. Music definitely can be used in that way. Just depends on who's using it or who's doing the music. Nothing is wrong with the music itself. It just depends on what kind of music you want to make. If influential artists want to start speaking about changes when it comes to politics or social changes—yes definitely music is an instrument to be used.