In Conversation with Director Rungano Nyoni of BAFTA Award-Winning Debut Film, 'I Am Not A Witch' 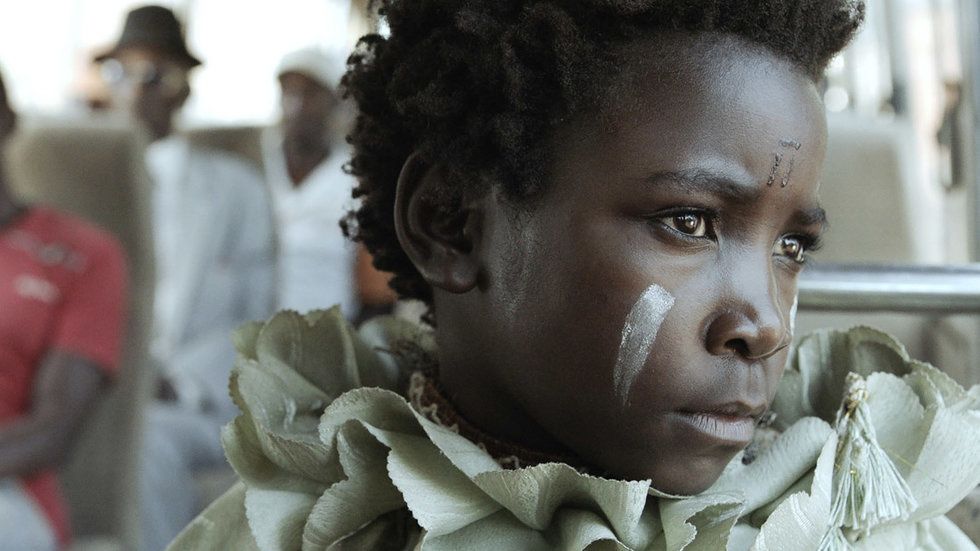 We speak with the Zambian filmmaker about her creative process and the film's continued success.

Rungano Nyoni is the writer and director whose debut feature film, I'm Not A Witch, was awarded the "Outstanding Debut by a British Writer, Director or Producer" by the British Academy of Film and Television Arts (BAFTA) this February in London. Shot in Zambia, the film is primarily about Shula, an 8-year-old girl played by newcomer Maggie Mulubwa, and her experience at a camp for women accused of witchcraft.

In 2017, Nyoni also won "Best Director" at the British Independent Film Award in the same year the film won "Best Feature" at the African International Film Festival held in Nigeria. In a phone interview with OkayAfrica, the Zambian-born filmmaker talks at length about the nature of her film, beliefs in witchcraft, her filmmaking process and its continued success since its release in May last year.

Do you believe in witchcraft?

I think it's a difficult thing to answer. It's a good question, but when I was doing my research, I wasn't very sure, in fact I was probably more skeptical than unsure. I think that people perform ritualistic things in order to get something, either for good or for evil. This is what I think. How successful that is, I have no idea. So, yeah, so I don't know. Probably the short answer to that.

How much of your thinking and beliefs about witchcraft changed over the course of working on the film?

My problem is that witches tend to be evil and it all involves women. So it makes me believe less in it than if it had been both men and women doing evil things. I believe in a god, but when you look at the church, you start looking at men being always in the upper ranks and women being lower and it makes you sort of believe less in the idea of religion. So it's probably similar to the idea of witches.

Your distrust and ambiguity about the belief in witchcraft is strongly portrayed in the scene where Shula is made to choose the guilty person (and only one in a bright-colored shirt) in a line of men accused of theft.

I made his T-shirt red deliberately so it's the brightest. So you could either read it as she picks the person with the brightest shirt and he was unlucky. Or she has powers, but I think sometimes when people impose things on other people, then they sort of become it also.

Get a sneak peak of the scene below.

Did you also want the ambiguity over whether or not Shula is indeed a witch to maintain the viewer's balanced interest and avoid easy or wrong conclusions about witchcraft?

I don't think I necessarily balance it, because there's some people that don't necessarily get it. So they think we're saying a negative view of Africans. I think if I'd done this story in the West, probably people would just consumed it maybe better, or understood it easier. It's nothing to do with Africa. It's this idea of misogyny and the idea that exists everywhere. I just decided to talk about misogyny in an African context.

And you never worried too much that the film will fuel still persistent beliefs about the continent?

It's funny because people that take it literally are the people who already think this is what Africa is. So there's nothing I can do to help them, really. And I can't censor myself because of what your preconception is about something, you know?

Beyond being the central character, Maggie Mulubwa who plays "Shula" does a brilliant job of centering the film with her composure in the face of serious allegations. What were your specific intentions in making her stoic?

I wrote the character quite loosely, so the last two girls that were shortlisted were between the girl that I chose and another girl. The other girl was more, sort of confrontational and she expressed herself much easier. I would've used her like that and would've changed the script slightly. But in the end I chose her [Maggie Mulubwa]—she was very quiet. And I kind of liked that she expressed a lot without saying much. But in real life once I got to know her she was very talkative.

Did you have to give her more instructions than you would a professional child actor?

Each scene I do, no one sees a script, I just tell them what's going to happen. I ask them how would you behave if this happened. So like in the police station, I asked her, "You're in a police station you're being accused of being a witch. What do you do?" She said, "I would be quiet." I said "okay, then do that."

Is this approach special to the making of I'm Not A Witch or is it a directorial philosophy?

No, it's definitely not a philosophy. Depends on the project. With non actors, you definitely have to give them the freedom to do what they feel comfortable doing and not dictate them.

Over the course of working on the film, did you find cases of people who had been absolved of accusations of witchcraft and have somehow been reabsorbed into a community?

I don't know. I didn't see one. I think if my grandmother were accused of witchcraft, she would be the one to break. When I told her of my film what I was doing, she kind of rolled her eyes and said "Ugh, just people trying to exploit other people."

Be sure to watch Rungano Nyoni's, I Am Not A Witch, now available on DVD, Blue-Ray and On Demand.