In Conversation: Cameroonian Designer Serge Mouangue on Shedding the West and Finding Japan 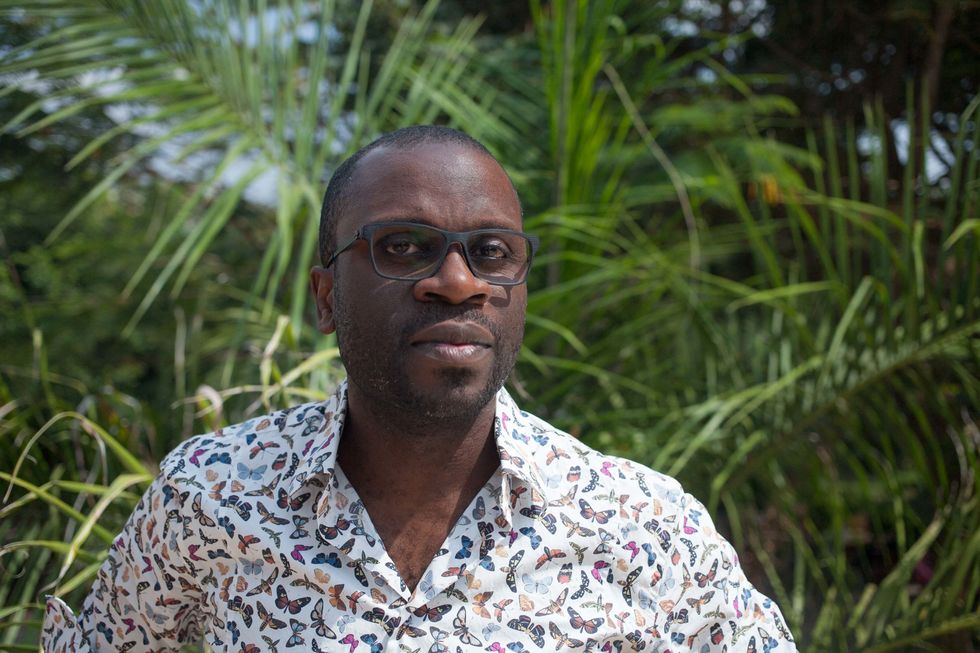 The artist and designer behind Wafrica discusses connecting West African and Japanese aesthetics without a Western filter and explains how to succeed in a creative field.

Serge Mouangue is known for combining Japanese and West African design elements to create—in a world now full of wax print fusion clothing—kimonos that are both beautiful and unique. But, as he’s quick to emphasize, Wafrica—the label under which his creative projects live—is also about sculpture and live performance. He plans to keep finding new ways to fuse Japanese and West African aesthetics until the concept has been exhausted.

While working in Tokyo as a car designer for Renault, Mouangue had a curious cross-cultural epiphany—that if he were to shed his Frenchness and reveal his African-self he could suddenly communicate far more fully and connect more intimately with the Japanese people and culture around him. We met up with Mouangue at this year’s TED Global conference in Arusha, Tanzania and asked him to explain.

Serge Mouangue: I realized if I behaved more like an African, Japanese people would understand me better. We'd get things done faster. I could understand their social structure, because it's very similar to what we have in West Africa.

OkayAfrica: What do you mean “behaving like an African?”

SM: Well, I grew up in Paris mainly, and when you grow up in a foreign country you have to adapt. You have to mimic some of the behaviors around you. That disappears when you go back home for vacation or to see the family or things like that. Arriving in Japan I kept my Western ways of seeing the world and I quickly understood that it didn't work.

I discovered that the way Japanese and West Africans socialize is very similar. It's very codified. It's very sophisticated. They have a respect for the elders that's pretty much the same. They are animist as well in terms of belief. Even though Christianity and Muslim is very present in West Africa, underneath people are animist. They believe that every tree has a soul and there's potentially a god here in that plant. That's animism and you can see that in Japanese cartoons and anime. That is still present.

I had all kinds of observations but because I'm not a sociologist or an anthropologist my way of answering my questions was by creating and doing design. That's how I started mixing and juxtaposing Japanese aesthetics with West African aesthetics. That's how "Wafrica" was born and started producing clothing, sculptures, live performances, things like that.

So, to engage more fully with Japan you had to get rid of the filter of France and the West. Was there a point when that revelation came?

SM: It was a slow process—instead of making meetings like that, you could bend this way. Instead of saluting someone like this, you do it this way. Instead of talking like this, you talk this way. They hear it. This is what I used to do when I went back and saw my cousins back in Cameroon. This is how we do things when you see an elderly person—this is how you behave. When there's a ceremony it's like okay, I understand that language. I understand that space. I get it, why now, because this is where I come from. Again, if I was a writer I would write about it. That's not my field. I design stuff.

Blood Brothers, a collaboration between Mouangue and a Japanese craftsman. Photo courtesy of Serge Mouangue

SM: They were as surprised as I was. My first kimono design was modeled by a woman from Senegal. When she came into the room for the first shooting, the Japanese crew was speechless. Even me, I didn't expect that presence and those cultures to be so obviously tied into one another. There was some kind of obvious design—why, I don't know. It wasn't strange at all.

Both you and the Japanese crew had the same sort of speechless feeling...

SM: I didn't know what to say. That's a kimono but the textile is from West Africa. If a Japanese woman was wearing it, it would be the same. The first customer, a Japanese woman, told me that it allowed her to wear a kimono differently. When Japanese women wear kimonos they can feel an obligation to behave like a servant somehow—without pride. But when she wore her kimono she said that because it has that African extension she could behave a little bit in a different way because it wasn't a traditional kimono. It was something that could take her into another world. She didn't have to back down. I understood that she could behave with more pride as a woman—not as a Japanese—but as a woman.

Right, because it tweaked the expectations the kimono brings. What did you think of Alsarah’s TED performance when she said tradition is a discussion with the past about the future.

SM: I listened to her very carefully because she was stepping into a dangerous world. With tradition, you have many thing that stops you from embracing the world as it is today. Tradition can stop people from expanding—from being themselves. Tradition can be a threat for freedom as well. But what she said was very smart. She put it in very articulate language because she said that it's not what ties you up, it's what liberates you. That's how it should be understood, traditions have to reinvent themselves.

Right, it's a very fine line.

SM: It's very fine, very fine. When you talk about tradition in music, it is good. It is interesting. Sometimes there's a traditional musician that doesn't want to hear about anything else but their kora. That's it, the rest is rubbish. But the kora wasn't the kora 200 years ago, it was something else. Tradition becomes a frozen image—a jumping lion frozen in mid-air. But tradition evolves and only because our lifetime is so short you don't realize that it evolves much. Again, it's a very, very fine line.

Right now, especially in the US, there’s a really heated debate about cultural appropriation that prompts people to take really extreme positions. I’m wondering how you see your work within this greater dialogue.

SM: Globalization is an opportunity in my eyes. You can have an artisan from a village in Chile connecting with an Aboriginal Australian craftsman. They can collaborate. That was impossible before. That's what globalization does as well. Someone like me, I can collaborate with someone in Japan and have things exhibited in Timbuktu or anywhere else. When globalization allows that, I think it's a good thing.

Things like identity, nationalism, traditions and conservatism are sometimes dangerous. Let's call things the way they are. It can be very dangerous. When do we start being American, where does it end? Is it a culture or is it a wave, a movement or a way of thinking only. I don't know. Does it make sense to have the notion of a nation? Whereas you said it stretches two different directions and you have to pay attention to some extents how far that goes because yeah, it triggers other emotional points in our memory, what we think is our memory. Tradition is great when it's used with openness.

How do you engage with West African traditions?

SM: I've exposed my work in Senegal and in Nigeria also. It was very well received. I think both cultures [Japanese and West African] are so open because they are curious cultures and they don't know much about each other. I think in West Africa, Japan is seen as the country of technology, of advanced features in cars, the country of cartoons and things like that. So, they feel honored that some icons of their culture is being transformed and fit to the Japanese sophistication.

That's the feedback that I have so far. I never heard from that point of view any rejections. In Japan I had one very racist email that I received in 2008 of someone who said to me, “how dare you touching such a precious culture when you come from the third world. Don't ever mix Japan with where you come from. It's devalued completely Japanese sophistication.” I didn't really pay attention to that to be honest. Actually it encouraged me to do more.

Behind the scenes at a Wafrica show in Tokyo. Photo courtesy of Serge Mouangue

It must mean your work is having an impact. Do you get much feedback online?

SM: I don't have a Twitter account because I don't care about what people think and I don't have something smart to say every two weeks or every day. I don't have a Facebook account either. I do my stuff. I show it. That's it. If you're not happy—bad luck.

That's the key to concentration.

SM: Yeah and I don't expect any feedback. I don't expect anything. When the museums are interested they call me or contact me and they say can we buy this and that and I'll say yeah take it. Yes, with the waves of things we receive every day you can't stay focused and improve what you do. I stay in touch with what's going on, don't get me wrong but I don't need to talk all the time.

SM: Yeah on my terms and I don't need to defend what I do—I just do stuff. Yeah, if people like them it's like here you see it, if you want to know more, we can talk and you'll know more, that's it. Up to you to put it on the social network or not—I don't care.

What can people do to make the switch, like you did, into more creatively-fulfilling work?

SM: There are two ways. Either you try and you do it with conviction, with hard work—observation, discussion, curiosity—and you have to produce. You can't do anything if you haven't produced. You have to produce until you're satisfied with what you're doing. Don't expect good feedback from others—don't care so much about that—just produce and try to make things better.

Or you join a community, a school, a project—find a mentor, a master, someone or group of people that can help you understand what from their point of view creativity is about. You have to be patient and produce with these people or this group or that community until you feel that you are answering the good questions through creation—bringing a parallel answer to what the mainstream thinks. These are the two ways in my head right now.

Thank you very much for talking with us.