A Look Inside Cape Town's 'Infecting The City' 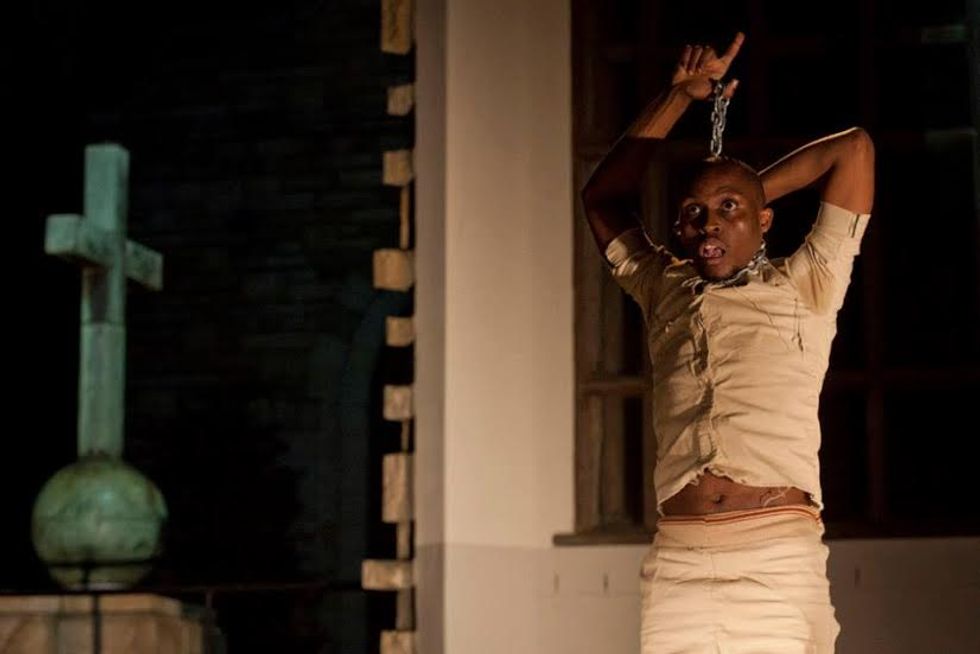 All photos by Sydelle Willow Smith

For six consecutive days, during Infecting the City, Cape Town city centre becomes a canvas– an area transformed into whatever the artists and citizens want it to be. The public art festival, which began Monday and runs until Saturday, includes 40 distinct pieces by artists across a variety of disciplines.

Night two's performances exemplified what Infecting the City is about– a provocative, site-specific, public art intervention that resonates with and challenges people to connect with each other and their city, through art. The festivities kicked off at The Centre for the Book on Queen Victoria Street with Thoriso Le Morusu by Neo Muyanga and The Simon Estes Alumni Choir. Lining up the street on Queen Victoria St just outside of The Center for the Book was BDSM, a video installation in which the artist sat emotionless whilst dirt and garbage were flung at her. Projected off the walls of the City gardens, the video lost its grip on the audience, then becoming a sea of whispers and mumbling voices. Further back, a voice could be heard whispering, “I thought the artist was going to be here.”

In the middle of the street, a carpet taped to the floor was spread out on the road with a lonely couch that sat atop. Couched is the name of the piece by dancers Shaun Oelf and Grant Van Ster. Before the performance, audience members had the opportunity to sit on the couch and pose for pictures. Couched is a dance performance that incorporates dialogue. There was a joke here and there. One lady in particular seated next to the couch chuckled from beginning to end, ultimately becoming the base of the dance choreography.

Next up for the night was Dark Cell, which after a few minutes of intense choreography and precise music score, ended with choreographer Themba Mbuli standing against the wall in the nude, arms outstretched and his pants at his ankles– a pose that took on the appearance of images from Robben Island of political prisoners being humiliated and tortured by the security police. The Dark Cell dance performance piece draws inspiration and metaphors from imagery of prisoners on Robben Island, probing mental freedom and self-imposed restrictions.

In Surveillance Stage, the idea of collaboration between artist and city dwellers becomes stretched to its limits. A performance art piece in which work is created by the audience,

Jay Pather, the curator behind Infecting the City, says about the festival, “A public art festival in South Africa should invariably mirror the range and complexities of our nation. Our chequered history forces us to be inside a moment that bristles with contradiction: conflict, celebration, dizzying heights and terrible lows."

As the night came to a close, the performance pieces gave way to celebration, with the Cape Town Philharmonic Orchestra playing a forty-five minute set at Green Market Square. With the last music note hanging in the air, slowly becoming inaudible, the crowd dispersed into the dark.