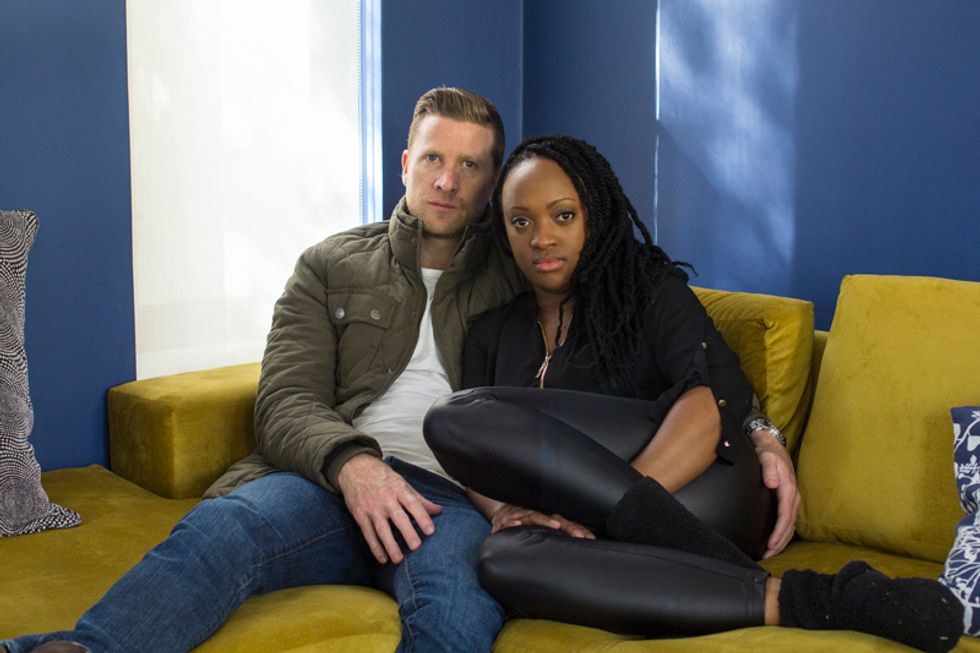 Miora Rajaonary’s 'I See You With My Heart' tells the stories of interracial couples in South Africa.

In her debut solo exhibition, Madagascan-born, Johannesburg-based documentary photographer Miora Rajaonary explores the experiences of interracial couples in post-apartheid South Africa. I See You With My Heart: An Exhibition for the New South Africa, which launched last week in Johannesburg, is composed of a series of intimate portraits and audio interviews of mixed-race couples in Gauteng.

According to Rajaonary, the exhibition is one of the first documentary projects to examine the experiences of interracial couples in post-apartheid South Africa, where interracial relationships were illegal until 1985.

In an email to Okayafrica, Rajaonary explains that her own experiences as a black woman married to a white man shaped her curiosity around the topic. It was only when she moved to Johannesburg four years ago that the “race factor” became an issue when it came to love and friendship. “I have a vivid memory of the first time we went to a restaurant and these two black women sitting next to us were staring at us. I felt misjudged and very uncomfortable. I was also called a ‘traitor’ once, and certainly felt out of place when we would go to some parties where I would be the only black person,” says Rajaonary. She adds that the reactions weren’t all negative. Some people were genuinely happy to see an interracial couple. “But either way I could sense that people cared, and I was not used to that.”

Rajaonary’s work explores the progress made by South African society as well as the challenges interracial couples still face. In her research, she found that interracial dating in South Africa can be more challenging for a number of reasons. That cities are still racially distributed makes it more challenging to get to know someone of a different race on a personal level outside the office or school, explains Rajaonary. “People of different races don't live and go out in the same areas. And even at restaurants and bars where I see different races, mixed tables where black, white and Indians sit together are still a very rare sight,” she says.

According to Rajaonary, culture also plays a bigger role in keeping mixed-race couples apart in South Africa than it would in say New York or Paris. “Music, sports and even food are racially marketed. You are black, so you are supposed to dance to kwaito, love football and eat pap. You are white, so you are supposed to go to rock concerts, live for rugby and eat boerekos,” she writes. “Because of this lack of knowledge and understanding and the persistent preconceived ideas inherited from the apartheid regime, interracial couples here often face familial opposition and lack of community acceptance.”

Rajaonary adds that in Johannesburg certain neighbourhoods are becoming increasingly mixed. “People are less scared to mix here. The younger generations in the city are more open-minded,” she says. “I see more and more mixed race couples and I am sure people will get used to that.”

Rajaonary is quick to note that while a noticeable positive change may be happening in South Africa’s larger cities, the changes don’t reflect the reality of the rest of the country. Even in Pretoria, she noticed the mixed-race couples she interviewed had vastly different experiences than the couples living less than 50 kilometres away in Joburg.

One of the couples interviewed for the project, Lali and Sizwe, convey their story with an honest humour and a certain sadness when they discuss taking each other home to meet their parents, or the number of friends and family they’ve lost since they started dating. Sizwe shares an instance when he was arrested throwing a surprise party. “I got arrested, someone claimed it was a drug bust and I said ‘okay cool’. That party was very mixed but only the black people were arrested,” he says in the audio clip. Their story is not a singular one. It shows how far South Africa has come yet still needs to go towards dismantling racial prejudices and embracing interracial dating.

'I See You With My Heart: An Exhibition for the New South Africa' is touring in South Africa and Lesotho. Check out the full list of dates and cities below.