Interview: K'naan on Nas, Transnational Identity, and His New EP 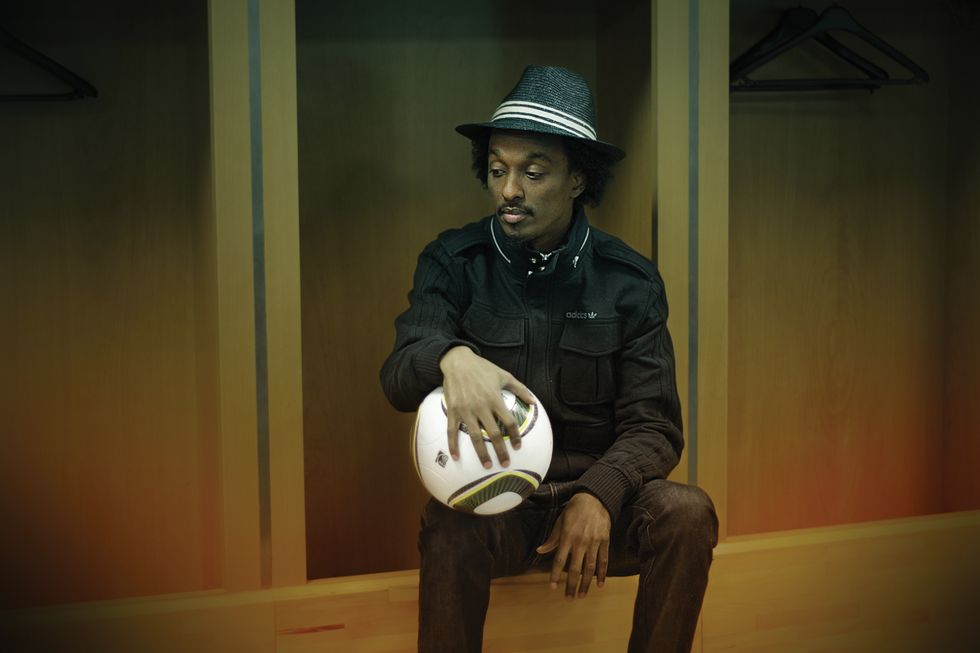 Okayafrica sat down with Somalia's troubadour K'naan to speak about transnational identities, the after-effects of having the most popular song in the world, and his new More Beautiful Than Silence EP.

I read that you grew up looking up to rappers like Nas, how did you come to get him on the new EP?

I’m definitely a huge fan of Nas. He was kind of one of the epic idols to me. He still is. He’s one of the greatest of all time to me. Not only as far as rap goes, but as far as art goes. Our relationship started out of the Distant Relatives project with Damian Marley. Damian and I had been around each other heavily during the Troubadour album that I was making. He really liked some of the Ethiopian and jazz sample ideas I was using. So some of those records that you hear with him and Nas have some of those samples also. Damian is a real close friend of mine and called me when him and Nas were getting in. He asked if I wanted to do a couple of joints and be a part of it. And, in fact, “Africa Must Wake Up” is really an old Damian and K’naan song that never came out and we ended up putting on the Distant Relatives album.

You and Nas linked back up for “Nothing To Lose.”

Yeah, I was working finishing up the album in New York. Nas and I had been talking over the past year trying to do something, trying to get in. And I actually got a text message from him just asking what was up and what I was doing these days. I tell him about the project and said, ‘matter of fact, there’s a song I’m working on right now that I want you to be a part of. He said, you know I’m in. So I hit him and he came through the studio and we just vibed and wrote the song.

There's a track on the EP called "Coming To America," any relation to the film?

[laughs] Yeah there’s definitely a relation to the film. That’s where the Prince of Zamunda reference comes from. We were in the studio, me and Chuck Harmony, messing around talking about Eddie Murphy’s flick. And I mentioned to him I have this idea of doing a song about that. Kind of the non-comedy version of it, the real serious version of it. Then he pulled out some samples and we used that real prominent sample. That stereotype of Africa, what they hear when they think Africa — that Paul SimonGraceland, you know. That kind of sound. I wanted to slip that in, so we made that song.

You and your music live in a particular space of the diaspora. Being that you grew up in Somalia but have also lived in Canada and the States, how do you identify your music?

My music is mostly about identity and, you know, the position that a person holds in the universal context. I’ve always written about the question of why am I here? And, who am I? Thats been the theme of most great artists that I follow. It’s just been particularly more complex for me, having lived half of my live in Africa in Somalia and the other half in North America —Canada and the US. But, I think that’s the kind of question we’re figuring out right now. We’re in a particularly engaged world, we’re in a particularly diverse world, we’re in an economic -driven world. That’s beginning to determine identity also. Whereas in the past it was the human being’s ancestral and spiritual history which determined identity, now its becoming economics. I’m just a part of that journey and those are the kind of questions that I address in my music and those are the kind of feelings that I think my songs bring up.  You know, songs like “Coming To America”

Your songs definitely have a transnational and transcultural feel.

Yeah, I think that’s actually more of the world too than saying “I am exactly this.” Specially for me. I’m someone who always holds up the African representation. I always hold that up. And rightfully so because it’s kind of the place that made me. It’s where I’m born, it’s where I find my philosophies, my history. But it wouldn’t be fully true to say that I’m also not from here [North America].

Would you ever classify your music as African?

I don’t know. I try to stay away from the game of classifying my music, because if I classified my own stuff what would other people be doing? I don’t want to take away people’s jobs. [laughs]

What are you listening to these days?

When I’m in the middle of making music I try to not listen to things that I can be influenced by, so I end up listening to music that’s very distanced from what I’m doing. But, I don’t know, I really like J. Cole’s new record. I dig that one. I’m listening to Arcade Fire’s Funeral, Gil Scott-HeronI’m New Here. Those songs “New York Is Killing Me” and “Me and the Devil,” yeah I love that record. Then I’ve been listening to Coldplay’s record, some Bon Iver stuff, some Broken Bells. Some singer-songwriter stuff Brooke Waggoner. And some of my friends, this girl Jaymay who is an incredible singer-songwriter from New York. She’s a real wordsmith.

Do you feel having this incredible success after Troubadour and "Wavin' Flag" [the Coca-Cola 2010 World Cup song] has affected you and your music?

I think it’s true that things like that change you as a person. And I think it’s true that when you change as a person your music changes. But I really hope it hasn’t changed me in a superficial sense. I don’t know, I don’t think I'm the kind of person that would be changed by experiences in the superficial way. At least I really hope I'm not. So I don’t think my music is influenced by success. But its influenced by the reach of it, you know.

Before I made Troubadour I never really imagined that I would be playing in China. I never imagined I would have one of the most popular songs around the world, you know in South and North Korea. It's not something I would imagine. I don’t know what kind of subconscious effect that has on the human being, I’m not that analytical about my own self. I’m sure those things have had an effect. But the thing that had the most effect on me was on The World Cup Tour, I was able to do 22 countries in Africa back-to-back. That was one of the most eye opening experiences I’ve had as someone who makes music. And I think that may be what had the most changing effect on my work and my personal life.

K'naan's More Beautiful Than Silence is available now on iTunes.