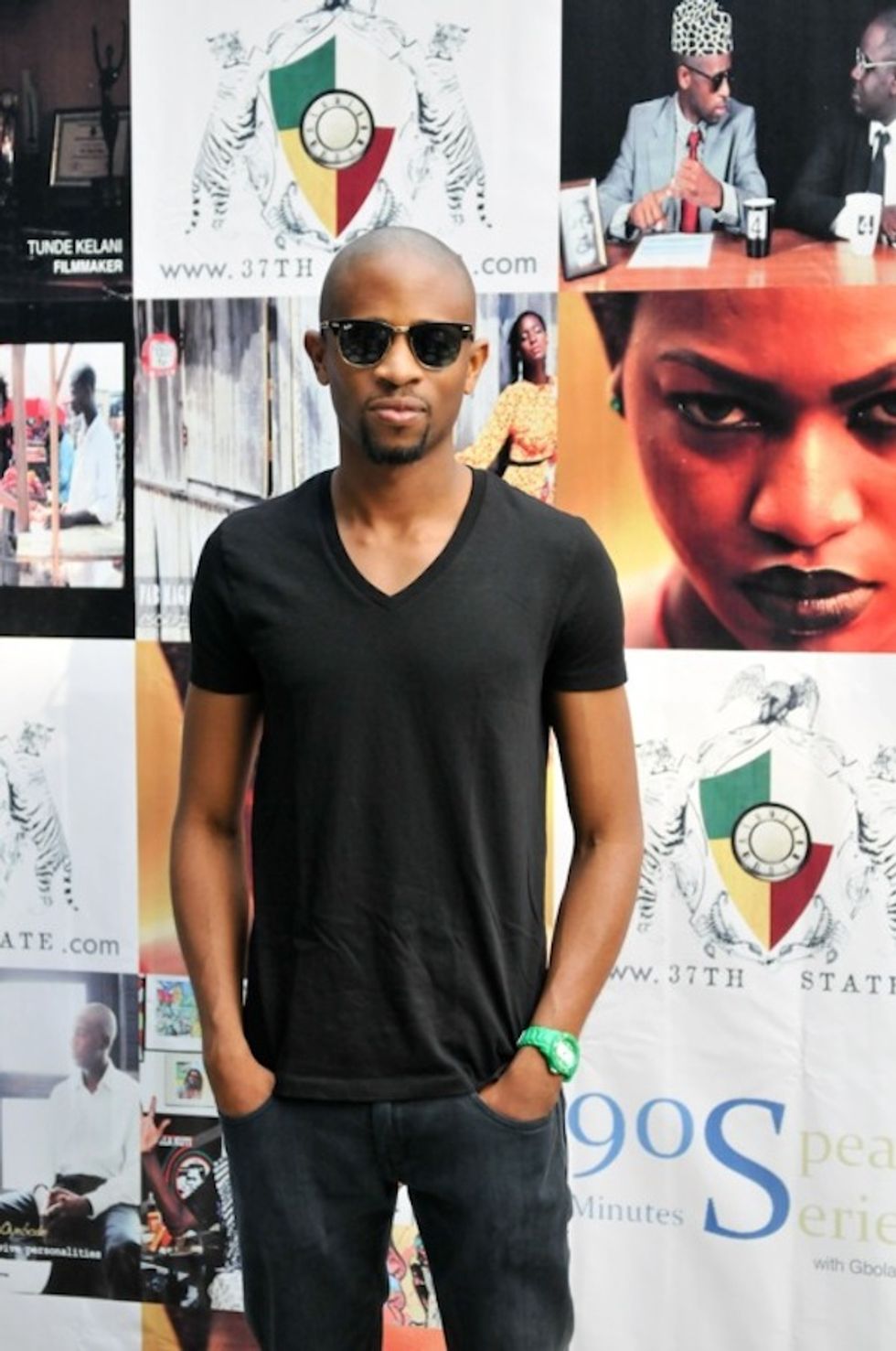 Bolaji Kekere-Ekun is a Nigerian filmmaker and the founder of 37th State Productions, a team of young creatives responsible for producing films like Nkiru, music videos like Nigerian singer Tiwa Savage’s video for “Ife Wa Gbona,” and the documentary “Lady in the Water.” He gives us his thoughts on film making, what it’s like shooting on location in Nigeria and the importance of African cinema on the international scene.

OKA: What and where did you study?

BKE: English Literature undergraduate degree after which I decided to fuse my passions for music, writing, and films and get an MFA in Film Production from the prestigious University of Southern California School of Cinematic Arts in Los Angeles, California.

OKA: How did you come up with concept for the film Nkiru (video below)?

BKE: Before Nkiru, there was a little screenplay adaptation I wrote called Yemaya. The screenplay was adapted from 'The Opposite House", a novel written by my friend Helen Oyeyemi. A part of the novel was the story of Yemaya, a Santeria emissary (Santeria is a religion which combines the worship of traditional Yoruba deities with the worship of Roman Catholic saints) whose brother and sister gods are disappearing. Yemaya as portrayed in the novel is a very powerful water goddess and this began my fascination with this particular deity. I wrote a screenplay for it and Helen loved it, but then I realized it would cost a lot to make and didn’t want to make a less than apt film. Soon after that I finished my Master’s and moved to Lagos and subsequently decided to make two smaller films; a documentary exploring the water goddess & mami wata (mermaid) mythology called Lady in the Water and a short film called Nkiru, which would be a fun narrative plot driven experiment. I still would love to make Yemaya some day though!

OKA: How long did it take to make the film?

BKE: It took us about 6 days to shoot. We were shooting on a private beach and had to take a boat out there everyday with the cast, crew and equipment on board. At the time, I hadn’t met any skilled editors in Lagos and so decided to edit the film myself. To do that I decided to take a few months away from the project so I could come at it with a fresh perspective later. In the meantime I set about building the 37thSTATE production company establishing our brand. All in all it took about a year to complete Nkiru.

OKA: What are some of the production challenges you faced while filming on location in Lagos, Nigeria and how you were able to overcome them?

BKE: Haha. The Nigerian factor. Shooting outdoors in Lagos is always hectic. The moment you bring out a camera the local unemployed youths in the area surround you and demand to be paid and if they’re not they disrupt the shoot and sometimes it gets dangerous. This is part of the reason I decided to shoot Nkiru at a beach. Being my first film in Lagos I wanted to have as much control over the set as possible.

A funny story: On the first day of the shoot our producer gets arrested, or semi-arrested by some traffic law enforcers. They claimed she had made an illegal turn or something of the sort but really they had just decided she would be their victim for the day. I receive a frantic call from the producer and I speak to the officers in charge. They tell me where they are and I take one of the production assistants and go over to meet them at some petrol station. Let’s just say after a small monetary transaction (which was all they were after) we were allowed to go on our way. By this point we were 4 hours behind schedule and factoring in our commute to and from the beach, day one was more or less wasted. That was my lovely ‘welcome to filmmaking in Nigeria’ moment. Still, these are some of the factors that make filmmaking here unique and challenging and they make the rewards that much sweeter.

OKA: Who are your filmmaking role models?

BKE: I’m not a role model kind of guy. Or maybe I have role models in other walks of life but not filmmaking. With filmmaking I have directors whose work I definitely admire. Mostly I enjoy directors that have an easily recognizable style, i.e. after 5 minutes of watching the film you can tell who directed it.

Tarantino, Guy Ritchie, Sofia Coppola, Park Chan Wook are some of my favorites. On the African side, Tunde Kelani, Izu Ojukwu, Ousman Sembene and Neil Blomkamp I like. I would really like to see the Kenyan filmmaker Wanuri Kahiu’s work. I saw the trailer for her short sci-fi film Pumzi and she seems to be doing some interesting things.

OKA: What role does African cinema play in the International film arena?

BKE: Cinema and all forms of visual media play a great role in educating the world’s people about each other. One of the reasons American culture is widely known and celebrated is because it’s been pushed worldwide via film and television. So much so that the world has been educated about different aspects of American life whether it be politics, school systems (high school dramas/comedies), music, and the list goes on. African cinema can begin this education and interaction with the world by packaging our culture in a way that is internationally accessible. This is one of our missions at 37thSTATE and we believe it is a worthy one. When you meet someone and you know a little bit about his or her culture, then interaction becomes that little bit easier. As the popular saying goes, ‘people only fear what they do not understand’.

OKA: The fashion film Rendezvous in Paris (video above) is shot in collaborations with 3hundred, what side of the fashion business were you trying to show?

BKE: When my friend Charles Obienu started his creative consultancy firm 3hundred, he called me up with an exciting idea. He had been reading up on fashion film and decided that because of his background in fashion (he worked for a jeweler in London) and his love of film, he wanted to merge the two together and create a new kind of fashion film; one that would go behind the scenes and show how an established international fashion brand works and also interview its CEO. His goal was simple; the Nigerian fashion industry was and is still growing at break neck speed but the actual process and business behind growing a fashion brand effectively remains a mystery to most in the local market. This is simply due to lack of access and exposure. With this film, we hope to peel back the curtain a little bit and give viewers at home and abroad the chance to see a successful brand at work during Paris Fashion Week through the eyes of an entirely Nigerian/African crew. The brand we follow is Tom Binns, an international jewelry brand with clients that range from Julia Roberts to Rihanna and lately Michelle Obama.

OKA: Do you have any advice for up and coming African filmmakers and producers trying to make their mark in the industry?

BKE: Might sound a bit cliche but be yourself. Find your voice. The only way to do that is to keep making movies. Draw on experiences and interests unique to you and the rest will reveal itself. Don't let others opinions of your work distract you from your goal. I myself am still walking the path and figuring out my place in the landscape of film and of Africa. When i get to the end of it i'll be sure to hit you up and share my journey!