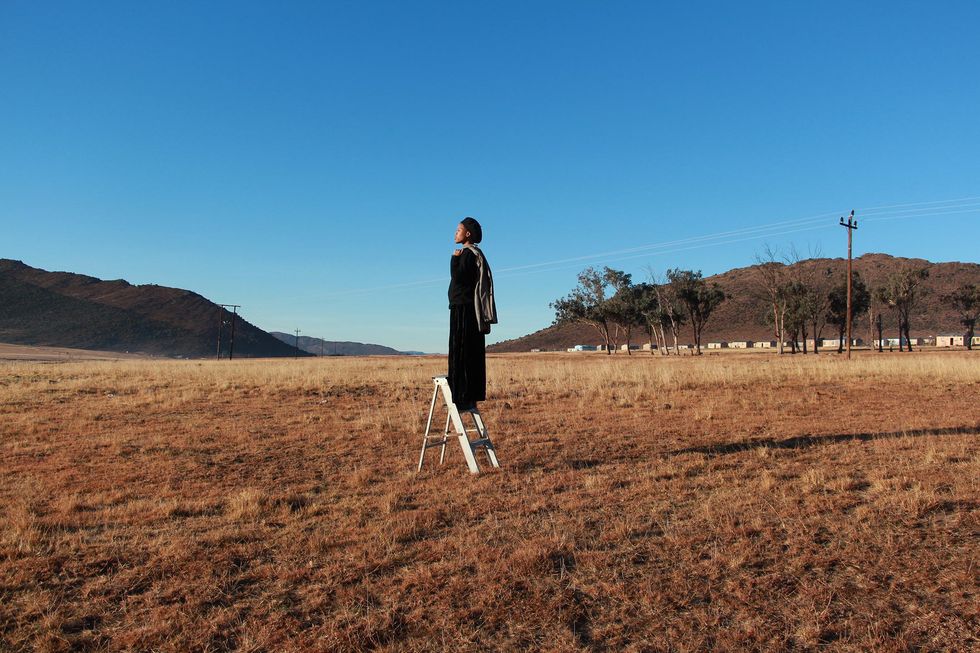 iQhiya is the up-and-coming, South African female arts collective you need to know.

I was eavesdropping on a table of well-dressed young ladies in Johannesburg when I kept hearing the word iQhiya. The girls were talking fervently and using the term ‘slay’ like it was punctuation all dancing around that one phrase. As they were leaving I asked them what they were talking about. They pointed me to a Facebook page for an up-and-coming, South African, female arts collective: iQhiya. Their first group exhibition was a week away in Cape Town. So I rented a car and drove there.

iQhiya is made up of 11 women––aged 22 - 32––who met while studying at the University of Cape Town’s Michaelis School of Fine Art. As students they wanted to do a group exhibition at the school, though the university didn’t offer them a space large enough to accommodate all 11 artists. Tired of constant under-representation and minimization of female and black artistic efforts in South Africa, their original idea for an exhibition morphed into the collective we now know as iQhiya.

The group-members are using their individual excellence to draw attention to one of South Africa’s most undermined demographics: black women. Bronwyn Katz won last year’s Saosol Merit Award—South Africa’s longest-running art competition of its kind—for her video Grond Herinnerig. Buhlebezwe Siwani received the Katrine Harries postgraduate prize for an outstanding body of work. She also works as a sangoma, and incorporates that life into her work. Thandiwe Msebenzi uses photography as a medium to question how culture and tradition can coexist in a post-colonial society. Sethembile Msezane was invited to Australia for an artist residency at Situate: Art in Festivals. Of course, that doesn’t even constitute half of the collective.

The entrance to their show at Cape Town’s AVA Gallery was a work of art in itself, with the words “futuristic black girl,” “evolving,” “creation station,” “light beam” and, again, “slay,” surrounding the artists’ names spraypainted white against black styrofoam. To the left was a giant wooden sculpture by Lungiswa Gqunta. Opposite it was a collection of Bonolo Kavula's lithograph prints that I stared at for the better part of 20 minutes.

An explanation of the exhibition read as a manifesto: “The works speak to voids, tensions, histories lingering between the materialities of the everyday and the imaginative, fantastical futures where we might be free…”

I caught up with iQhiya via email and asked them a few questions surrounding their collective identity and art in South Africa.

Nereya Otieno for Okayafrica: For all our non-Xhosa speaking readers, what does iQhiya mean? What does it mean for you guys?

iQhiya is a Xhosa word for head wrap worn by women. it represents “unshakable power and infinite love.” For the women it also represents togetherness “you know how when you wearing a doek you bring both ends and wrap them together, that’s what it means for me to be part of iQhiya, bringing women together to support each other” says one of the members. It also “signifies what this collective is to me, a space where I find comfort, I can be vulnerable and feel safe."

As individual artists we have different associations with the meaning of the word.

You all belong to a generation that is a first for South Africa. This is the first generation where the majority of the population could even consider being artists, let alone studying fine art. Does that put a pressure on you as a collective, or is it more of a freedom?

There are artists who have been before us who have left legacies of their own. There are the women artists Helen Sebidi and Noria Mabasa, to name a few. But quite literally a few, because there were only a small number of female artists practising as visual artists in South Africa but women have always been creating. We are just operating in a space that hasn’t celebrated black women artists in the same way that it has male artists. Our only pressure is asserting ourselves and giving ourselves the agency to create spaces for ourselves.

iQhiya seems to have a love/hate relationship with being a collective: very happy for curating a support system you value, but frustrating at needing numbers to gain attention. Can you elaborate on the trials of this?

iQhiya stems from a lack of recognition of black women artists. The frustration lies in the fact that we have to form a collective in order for our individual practices to be recognised. We have realised the importance and the power of coming together as a collective of black women artists and consciously use this power as a tool to empower not only ourselves but also others who find themselves at the margins of society. The collective has become a coping mechanism as we support each other.

How has being part of a collective influenced your individual work? Has it at all?

For some members ideas discussed as a collective has started to feed into their work and built confidence to communicate what we stand for in our individual practices.